When Is The Right Time To Merge The Army National Guard And Reserve? Never.

Is it time to merge the Army National Guard and the Army Reserve? Ask that question to Guard and Reserve... 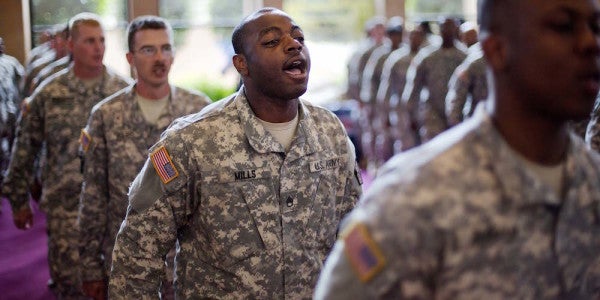 Is it time to merge the Army National Guard and the Army Reserve?

Ask that question to Guard and Reserve personnel and it’s like you just rolled a grenade into the room. People either run out the door to avoid it or jump on the question to preempt any further discussion of a divisive topic. Regular Army folks just shake their heads and ask why they need the amateurs at all.

This is not a new question, but it surfaces every time there are budget cuts in the winds. Sequestration is knocking on the Department of Defense’s door, and everyone is pointing to the other guy in the room saying, “Hey, cut their capabilities, not mine.” Still, in a concurrent era of budget cuts and persistent conflict, the question is a valid one. Are we duplicating capabilities when we could save money and personnel by simply getting rid of archaic distinctions?

What most people forget is that the battle between the organized militia and the continental reserve force is nothing new in the histories of the organizations. Note my wording, because it is the root behind the argument. At present, all three components — Active, Guard, Reserve — bear a striking resemblance to each other in manning, training, and equipping. However, to quote Monty Python, “If she weighs the same as a duck, she’s a witch!” And by that I mean, just because we all look the same, we by no means have the same mission.

The regular Army is the primary land component of the U.S. military, with a mission to “fight and win our Nation's wars by providing prompt, sustained land dominance across the full range of military operations and spectrum of conflict in support of combatant commanders.” Simply put, the active-duty Army is the tip of the spear (with apologies to the U.S. Navy, which owns the U.S. Marine Corps, which takes offense at both statements). The Army Reserves are the reserve component of the U.S. Army, and are also a federal organization under Title 10 of the United States Code. The Army National Guard holds dual status under Title 32 of the United States Code, which gives states authority to use the personnel for domestic actions, as well as under Title 10 when needed by federal authorities. If that’s confusing, here’s a handy cheat sheet.

It is not enough to look at present laws and duty statuses; the real story is found in the legal and historical roots of the organizations. The organized militia goes back to 1636, with the first muster of militia in Massachusetts. (Florida argues it was the first to muster under the Spanish, but since the U.S. Army goes off the English militia tradition, the honor resides with the Massholes. It’s the National Guard’s version of Deflategate.) It is founded on the English common law traditions as well as Article I, Section 8 of the U.S. Constitution, commonly known as the Militia Clause. This gives Congress the authority to call out the militia to “execute the Laws of the Union, suppress Insurrections, and repel Invasions.” It also reserves to the states the appointment of officers and the authority of training the militia. Clear as mud, right?

The role of the militia in the United States was hotly debated through the Early Republic period, as Antifederalists adopted the stance that the militia was imperative to offset the power of a federal government. Inheriting their distrust of a standing army from the British, our forefathers seldom allowed for a large peacetime regular Army. Instead, they called upon “volunteers” from the organized militia in times of war to plus up the strength of the Army. This practice continued through the Mexican War, the Civil War, and the Spanish American War. Why wouldn’t they just call up the existing militia units, you ask? For the reason that the militia was governed by state laws that usually did not allow the militia to operate outside the borders of their given state, let alone the continental United States. This was discovered the hard way in the War of 1812 when states refused to allow their militias to cross over into Canada. So the War Department came up with a crafty fix: Call up “federal volunteers.”

It was the Spanish-American War that really tested this theory and brought about a whole new legal mess. Simply put, the Army ran out of troops. And the states declined to authorize their troops to serve in the Philippines and other new territories. Regular Army troops — notably those influenced by Emory Upton, the Alfred Thayer Mahan of the late 19th century Army — grew frustrated at the continued reliance upon the militia. Upton was responsible for introducing German army tactics to the U.S. Army with an emphasis on combined arms. However, he also came back with strong ideas concerning the use of reserve forces modeled on the European continental reserve. He advocated for the abolition of the militia and a standing 400,000 strong reserve force. Upton tragically committed suicide in 1881, but his beliefs lived on in a generation of regular Army officers.

When did the shoe finally drop on the militia versus reserves debate? The first step was the 1903 Militia Act (sadly known as the “Dick Act,” for its creator Congressman Charles Dick), which served to clarify some of the issues between the militia and the regular Army. The militia was established as the National Guard in 1893, but the 1903 Militia Act further defined roles and responsibilities. While not removing all control from the states, the Act gave the War Department the authority to inspect and regulate National Guard units and hold them to a uniform Army standard. In return, the War Department would provide funding to the states for their National Guard forces. Governors still held authority over their Guard units in state, but they could be called up by the president for a period of nine months. This seemed like a compromise that would appease all parties.

Wrong. No one is ever happy in this debate. The War Department came back in 1916, with Secretary of War Lindley Garrison advocating the reserve concept to replace the National Guard. Garrison lost his job because of this, and the National Guard survived to fight another day, sort of. The National Defense Act of 1916 was in some ways one giant compromise that set the status of the National Guard to where it stands today. While it did authorize guardsmen pay for all weekend drills, a two-week period of annual training, as well as the growth of the Guard to 450,000 strong, it also did three very important things for the Army. First, the regular Army could now dictate to the states which types of units they could have, dependant on the needs of the Army. Second, the president could call up the National Guard for the duration of a conflict no matter where that conflict was; and finally, it authorized the creation of a Reserve Officers' Training Corps. Combined with the existing Medical Officer Reserve Corps, this would be the foundation for the entire Army Reserve system, which would expand to include enlisted personnel in the period between World Wars I and II.

Since that time, the fighting between the three components has been bitter, even as they unite to fight and win the nation’s wars. As all three have grown more similar in capability, they increasingly fight over resources. All three have renowned fighting records from the wars and conflicts of the 20th and 21st centuries. All have experienced massive fluctuations in their force structures, both in manpower and the types of units allotted. Nowhere greater is this demonstrable than the decision in the post-Cold War era to remove the majority of combat units from the Army Reserve. This decision was fought with the vehemence of the contemporary debate over combat aviation in the National Guard. When the dust settled, it was the regular Army calling the shots, just as it is now.

So where does that leave us? We have an Army National Guard that is significantly balanced between combat, combat support, and combat service support units, with a dual state and federal mission. We have a federal Army Reserve intended almost entirely for combat support and combat service support, with a significant training role that benefits all components. And we have an active-duty Army with a federal mission to protect the homeland. Neither the Army or the Army Reserve are available for disaster relief or civil disturbance missions within the United States under Title 18 of the U.S. Code commonly known as the Posse Comitatus Act. The National Guard, while under state control, fulfills this mission. Together, all three components meet the obligations to protect and defend the United States from all enemies, foreign and domestic.

To merge the Guard and Reserve would take away the distinct advantages that each bring to the table, as well as require massive changes in federal and state laws. Most importantly, the arguments toward such a merger are based on fiscal savings. Thinking that merely merging the reserve components will solve the budget issues is to fall into the trap that there is no competition for funds inside each organization as it is. The U.S. military has always been plagued by fiscal constraints as it is in essence a massive corporation with few built-in motivators for fiscal oversight or accountability.

Further, people are stuck in the thinking trap — stealing a term from the Army’s resiliency program — that the situation as it stands now is how it will be forever. If history is any guide, the combined factors of global instability, economic markets, and changing national security requirements will mean that the need for each component’s unique qualities will flux and wane as they have over the past century. Merging the Guard and Reserve would have significant second- and third-order effects that would reverberate far into the future. To merge the Guard and the Reserve would mean giving up capabilities. If they fell under the auspices of the Guard, states would have to assume a far greater role in the management of Army training and support, taking away federal assets. If they fell under the Reserves, states would give up their constitutional rights to an organized militia and have no force for disaster relief or civil disturbance.