The connection service members and veterans have to those who’ve served before us runs deep. We venerate the likes of... 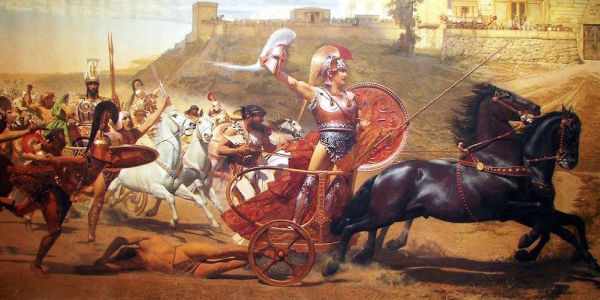 The connection service members and veterans have to those who’ve served before us runs deep. We venerate the likes of Lewis “Chesty” Puller, Audie Murphy, and John Boyd, not only for their heroism on the battlefields of yore, but for their contributions to our warfighting profession. They inspire us and set the standards by which we judge ourselves. We take the heritage they’ve given us very seriously. But the draw we have to the warriors of the past extends further back into history as we also feel a tremendous kinship with and respect for the soldiers and heroes of the classical world.

Antiquity is resplendent with heroes both real and mythical. Alexander, King Leonidas, Hannibal, and Caesar stand out as legendary military leaders and tacticians whose impact on the world can still be seen today, and we idolize the hard, rough men they led into battle. Greek mythology has given us Perseus, Theseus, Hercules, and Jason to name just a few. And any discussion about heroes of the past has to include Achilles, Ajax, Odysseus, and other figures from Homer’s “The Iliad” and “The Odyssey.”

What about these heroes do we find so appealing? They were, of course, heroic. But they were more than that. They personify the martial spirit we seek to emulate. Alexander defeated a vastly larger enemy and reduced the powerful Achaemenid Persian Empire with a mere 35,000 men. He took his army from the Levant to the Baes River in modern India. Hannibal’s double envelopment and destruction of the Roman army at Cannae is viewed as the gold standard of battlefield victories. Ajax single handedly held off the Trojan army, saving the day for his Greek comrades.

The appreciation for the martial spirit of the ancients is further evidenced by the adoption of many of their symbols and sayings by military units, companies that cater to the military community, and individuals in and out of uniform. We’ve all seen the malevolent-looking Corinthian helmet, for example, with its plunging cheek guards, dark eyes, and flowing crest, adorning patches and logos.

While these legendary men sometimes seem larger than life and were idealized in many ways, they were also very real, and like us, very complex. It is clear from reading ancient sources that these heroes held dear many of the same virtues that we value: honor, loyalty, courage, perseverance, ingenuity, and adaptability. For example, Homer tells us that Ajax and Odysseus fight the Trojans by themselves to recover Achilles’ body so they can give him a proper burial. This echoes the sentiment that we leave no man behind. Odysseus, during a decade-long trip home from his deployment to Troy, exemplified ingenuity and cunning. When captured by the Cyclops Polyphemus, Odysseus tells him that his name is Nobody. After blinding Polyphemus so that he could escape, the Cyclops cried out for help saying, “Nobody has blinded me!” The other cyclopes ignored him and he went on to endure, and triumph over, more hardships. This says nothing of Odysseus’ most famous act of cunning, that of ending the ten year siege of Troy with a wooden horse. It is interesting to note that while the Greeks adored Odysseus, the Romans reviled him, thinking that such deceit and deception had no place among honorable men.

Our military, however, has a long history of using deception to achieve victory, from ever-evolving camouflage to the creation of the fictional First U.S. Army Group in Operation Fortitude. Odysseus would be proud.

Despite their many virtues, these figures had flaws and were vulnerable. While in many ways no less powerful, and certainly blessed by the gods, they lacked utterly the aura of invincibility that many of our modern mythological figures have. This is part of the reason they are so accessible and feel so much like us even after thousands of years. One has a hard time believing that Superman or Wolverine will ever achieve such lasting appreciation among future warfighters. Significantly, it is difficult for us to think of our own war heroes as being vulnerable because they are too close to us; being known almost solely for their laudable acts of heroism in battle, they become one dimensional.

We have no such issues with those from antiquity. They are literally described as being flawed, and in some cases, their flaws, despite their virtues, actually define them. Achilles famously had his heel. He was also ruled by his rage. After killing Hector in single combat, Achilles, in his grief, hooked the Trojan’s body to his chariot and desecrated it, dragging it through the funeral games being held for his friend Patroclus.

These myths and legendary men remain relevant today despite the two millennia or more that have passed. Not only are their victories and defeats studied by military tacticians and strategists, but their stories show us that the nature of war and its impacts on the warriors who fight hasn’t changed even with all our technological advances. At the heart of these myths and the accounts of wars in antiquity are fighting men engaged in life or death struggles. They shared with their comrades the same intimate bonds and struggles that we share with ours today.

Dr. Jonathan Shay, in his books “Odysseus in America and Achilles in Vietnam,” suggests that the heroes in Homer’s works may have suffered from post-traumatic stress, or what he calls moral injuries, from their exposure to the rigors of combat. Homer’s works were not tales of adventure and glory, but tragedies describing men touched by war. And these myths are helping today’s veterans deal with their experiences. The organization Theater of War performs readings of classical plays and poems, such as Sophocles’ “Ajax” and “Philoctetes,” for veterans to help them understand that PTSD is a condition suffered by even ancient warriors. Founder Bryan Doerries recently published a book with the same name. Another organization, Voices for Veterans, uses mythology to encourage veterans to talk about their experiences among their peers.

We know that we owe a lot to those who came before us, from Patton and Petraeus to Alexander and Odysseus. It is our martial heritage, and we admire the heroes and warriors of antiquity. While we can appreciate them for their virtues and flaws, we can acknowledge that they have a lot to teach us. Not only about war, but about ourselves.