Why I Changed My Mind About Women In Combat Arms Units

One of the more emotional debates going on in the defense community right now is the initiative to move women... 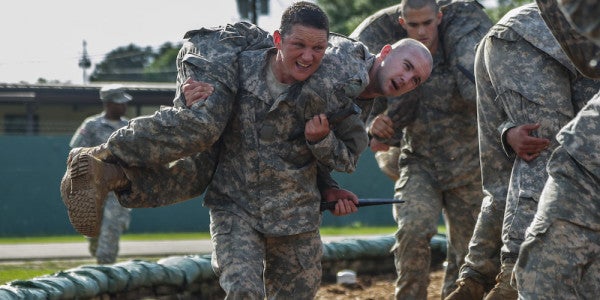 One of the more emotional debates going on in the defense community right now is the initiative to move women into combat arms units. At the front line of this fight is the debate over physical abilities, which is currently being tested in training programs across the Department of Defense, most notably, the integration assessment at the Army’s Ranger School. Rather than rehash this argument, which has already drawn some excellent research and analysis, I would like to draw attention to two subordinate and prevailing arguments from those who are against gender integration in the military. These are arguments that I have personally heard (from men and women in both combat and support elements) and once upon a time believed myself. What follows is partially my own personal journey from opposing women in combat arms to supporting it.

I was once diametrically opposed to seeing women in combat arms. I felt women would break the particular esprit de corps that existed in the units. While I was concerned that women couldn’t meet the standards, I was more concerned that our traditions would be broken and morale would suffer. Why did I change my mind? Through interaction with women who wanted to branch combat arms. Talking with them, listening to their goals, and getting to know more about them. I realized that they were soldiers first and that we shared ideals, goals, and the fundamental mission of the armed forces.

The root argument against women in combat, as I mentioned before, is physical requirements. Many opposed to gender integration, like Elaine Donnelly, argue that not enough women will pass the tests to make it worthwhile. This argument will be answered by the field trials and when the first woman becomes Ranger qualified. Bottom line, if a soldier can accomplish the mission, then he or she should be allowed to do it, regardless of gender.

But beyond the root argument are the emotional arguments. These are born from decades of a testosterone-filled “boy’s club” that has religiously protected its own domain. It echoes the same arguments brought against women flying combat aircraft (both fixed wing and rotary) and serving aboard submarines. These arguments have one common denominator: men are weak. The arguments are as follows:

Neither of these arguments center on the shortcomings of female soldiers; rather, they focus on how men cannot contain their emotions and inhibitions. As I mentioned, I once believed and was a proponent for both arguments. My underlying idea was that nature does in fact trump nurture. Men and women are human beings with innate sexual desires that, in the extremes of combat, will come to the fore. As a small-unit leader in the Army, I have seen what sex, sexual relationships, and romantic relationships in general can do to unit cohesion. In short, they are bad. I have not changed my beliefs regarding this topic.

What has changed is my belief that discipline and expectations of professionalism from soldiers should be tempered by ideas of innate human behavior. In the military, we ask the most unnatural things from our personnel, the most notable being the ability to terminate another person’s life: to kill. Violently. This is inculcated during training and honed through more and more training. We ask the utmost discipline from 18, 19, 20-year-old kids, when we give them a gun and put them in a shoot/don’t shoot scenario. If a soldier has the discipline to know when to take a life, or not, then he should have the discipline to keep it in his pants.

The second argument is based on the chivalric ideal that men exist to save women in distress. It is most often parroted by the ideologues on the right (Full disclosure: I’m a registered Republican) who seem to forget that being a soldier or military member means always placing the mission first. In addition, the bonds created in combat arms units mean that by necessity men develop strong feelings of affection and friendship for each other, and yet they still manage to not run to save each other during a firefight. Again, if we expect soldiers to have the discipline to react calmly under fire, we should expect the same discipline in personal relationships.

The bottom line is discipline, not making excuses for the expectations that we place on our service members. And the excuse list is long and tiresome. Sadly, it is tied to a deeper culture of making excuses around incidents of sexual harassment and assault that prevails in the military. When I was in my basic officer leader course, there were multiple incidents of senior enlisted cadre sexually harassing female lieutenant trainees: sexual comments, unwanted advances, and even inappropriate touching under the auspices of “uniform corrections.” When the class leadership brought it up to the officer in charge of the course, his response was, “I can’t spare my cadre, I’m understaffed as it is. Plus, I’m sure it wasn’t as bad as you perceived it to be.”

This culture of making excuses needs to stop. Yesterday. We call ourselves a professional organization and we need to live up to and enforce the standards to which we and the American people hold us to. Participation on the front lines of combat should be based on ability, not on tropes that we invent for ourselves. Those in the combat arms should take offense at the arguments that they cannot restrain themselves or have the proper discipline to do the right thing. Secretary of Defense Ashton Carton just last week stated that he feared sexual assaults would rise if women were admitted entrance into combat arms units, which is a flat out admittance of doubt in the professionalism of his combat service members. Those within the combat arms community should be the first to say, “I am disciplined. I will not fail my comrades. I will fight alongside all who have passed the same standards that I have.” Anything else is merely an excuse of weakness.