If you don’t know Navy’s underrated senior quarterback, it’s time to get yourself familiar. Keenan Reynolds deserves to be in … Continued 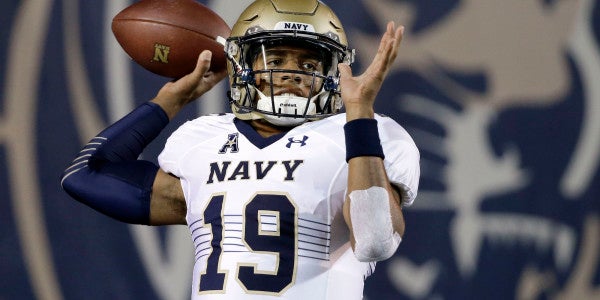 If you don’t know Navy’s underrated senior quarterback, it’s time to get yourself familiar. Keenan Reynolds deserves to be in the conversation for an invite to the Heisman Trophy presentation in New York City on Dec. 12 and it’s time for the national media to pay attention or risk losing a student-athlete story for the ages.

In Navy’s dominating 45-20 win last week over undefeated Memphis, the initial call for the final touchdown of that game was a quarterback keeper to Reynolds himself. Instead, Reynolds changed the play at the line of scrimmage because he saw an easy touchdown and a chance to seal the win over the no. 13-ranked team in the nation. Navy slotback Demond Brown took the pitch out and strolled easily into the end zone, sealing the Mids first win over a top 15 team in more than 30 years.

What makes this selfless act even more remarkable is that Reynolds is currently tied at 77 rushing touchdowns, an NCAA Football Bowl Subdivision record. One more touchdown, and he would have held the outright record, surpassing Wisconsin’s Montee Ball who set the record in 2012.

Navy Coach Ken Niumatalolo told The Washington Post: “We were trying to give the ball to Keenan there at the end, get him the record at home … but he got us into a better play. That just shows you the type of kid he is, the leader he is.”

Niumatalolo’s use of the word “leader” to describe Reynolds is why this is an epic period in service academy football. The entire Naval Academy football team is made up of leaders, but Reynolds is someone special.

It’s the same for Navy and Reynolds. He is regularly quoted saying things such as, “… it takes 11 guys out there working together.” This kind of unselfish perspective is what has made him the best quarterback to don a Navy uniform since the 1963 Heisman Trophy winner Roger Staubach.

Most importantly, it’s the kind of unselfish behavior that has Navy currently standing with a 7-1 record — its best start under Niumatalolo — and in a first-place tie with Houston in the American Athletic Conference. Navy is currently ranked no. 22 in the Associated Press Poll; the team’s first time in the top 25 since 2004. The Mids have lost only two of their last 15 games, and both of those were to the team currently ranked no. six in the nation, Notre Dame.

What more can you ask from a player beyond national records, a selfless attitude, and a team-first mindset, in consideration for college football’s top award?

Well, how about a player that truly exhibits the amateur status the Heisman represents?

No one in college football balances school, football, and the military component of service-academy life like Reynolds. As a model Midshipman, he was named co-captain of the football team by his peers and ranked by NFL.com as the second-toughest player in the country and the fourth-smartest player in the country last fall. Instead of going on a spring-break trip last year, Reynolds stayed and studied film even though he’s majoring in international relations. Last spring, he earned a 3.32 GPA for the semester.

The day-to-day grind of an academy is tough enough by itself, but when you add a Division I sport on top of that and perform at the level Reynolds is currently performing — both on the field and in the classroom — his accomplishments seem remarkable.

However, there is one more discriminator that sets Reynolds apart from any of the players who are better athletes and play on much grander stages week in and week out: None of them have signed up for a five-year commitment to defend our nation after their college playing days are over. Only Reynolds can say that.

While it would take a storybook ending for Reynolds to have even a remote chance of winning the Heisman, this long-shot situation should not prevent him from being invited to the party. Imagine a Heisman Trophy presentation in front of a national television audience with Reynolds in attendance wearing his Navy service dress blues. What a momentous occasion for the service academies, collegiate football, and our nation it would be.

Let’s hope the national media pays attention to something more than individual statistics and instead brings an extraordinary amateur sports story to the forefront. Now that would be something everyone could take pride in.