Will The Army Go Through With Letting Women Into Ranger School?

Three years ago this month, 1st Lt. Ashley White Stumpf was killed in action in Afghanistan. At the time of... 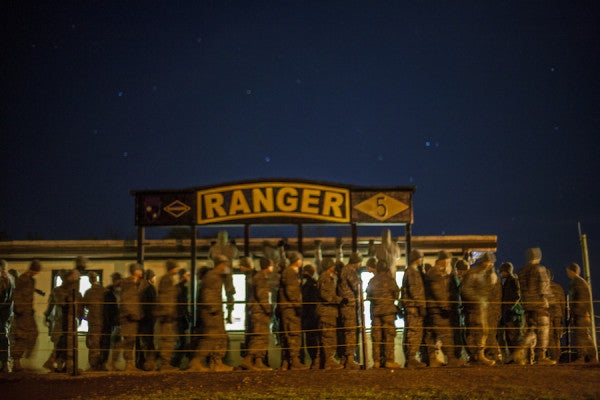 Three years ago this month, 1st Lt. Ashley White Stumpf was killed in action in Afghanistan. At the time of her death, she was attached to the 75th Ranger Regiment. Stumpf and two Army Rangers were mortally wounded when enemy forces attacked their unit with an improvised explosive device. At Stumpf’s funeral, Col. Mark O’Donnell, deputy commander of the 75th Ranger Regiment, praised her for her “great courage,” emphasizing that she “was not just accepted by the Rangers she worked with, but loved, admired and respected.”

One year ago this month, 1st Lt. Jennifer Moreno and several teammates died after their team was ambushed in a booby-trapped, bomb-making compound in Afghanistan. Moreno was killed trying to rescue one of her comrades, who had been severely wounded. According to Lt. Col. Patrick J. Ellis, commander of 3rd Battalion, 75th Ranger Regiment, Moreno “was a talented member of our team who lost her life while serving her country in one of the most dangerous environments in the world, … her bravery and self-sacrifice were in keeping with the highest traditions of the 75th Ranger Regiment.”

Moreno and Stumpf are not alone. Many women have quietly served alongside Army Rangers and on Special Operations teams for years. They received five weeks of training at Fort Bragg, in North Carolina, during a pre-deployment training period that predominantly focused on Afghan culture, language, and how to engage with foreign populations. They received very limited tactical combat training on weapons systems and fire and maneuver tactics and techniques before they were imbedded in these teams. Their limited combat training put both them and their teams at increased risk. As an officer described this discrepancy, when one of you zigs and the rest zag, both are compromised. One servicewoman, a Lioness, said she ended up separated from her squad in a very bad part of Baghdad due to this kind of discrepancy in training.

Moreno and Stumpf were attached, not assigned to the Ranger Regiment. They were volunteers who left support positions and state-side assignments to join one of the most challenging units in one of the most dangerous parts of the world. They did so even though military policy expressly excludes women from being assigned to these units. Why? Because the Army needed them. They enhanced combat effectiveness. Now the Army “might” let women get the same training as the men that they serve beside.

Last month, the Army invited women soldiers to volunteer for a one-time-only assessment to determine whether they will be allowed to attend Ranger School. However, the Army cautioned that this assessment may not actually go forward. It also said that even if the trial proceeds, no woman who graduates will be awarded the Ranger skill identifier that would allow her to be permanently assigned to the 75th Ranger Regiment or any other Ranger position.

The Army gave a briefing on this possible opportunity to the Defense Advisory Council on Women in the Services. Members of the council asked the Army representative, Col. Linda Sheimo, what criteria the Army would use to decide whether to approve the trial course. She responded by offering the inexplicable assertion that no criteria have been established. At this point, it seems they are just looking to see how many women are qualified and interested.

The Special Operations Command representative who attended the briefing reported that his command is continuing to study the possible cultural and unit cohesion impacts of including women in these elite units. But what is left to study? Surely, if the practice of imbedding women to these units had gone poorly, the Army would have stopped it long ago. Moreover, the Army’s own experience has proved that combat effectiveness is enhanced when women are included. As the Ranger commanders themselves testified at the funerals of lieutenants Stumpf and Moreno, these brave women were not merely accepted by their teammates. Instead, they were “loved, admired and respected” for service that satisfied the “highest traditions of the 75th Ranger Regiment.”

More than three dozen women have volunteered to serve as observers for this trial course. Potential students have until December to be approved by their commanders to attend this assessment.

Lieutenants Stumpf and Moreno died on the battlefield serving this country in the 75th Ranger Regiment. They might have been among the first volunteers for this “possible” Ranger School assessment. It is time for the Army to honor the service and sacrifice of Army women and give women all of the same training and assignment opportunities offered to the men with whom they serve.