Kate McClure, 27, was driving into Philadelphia on southbound I-95 last month to visit a friend when her car started... 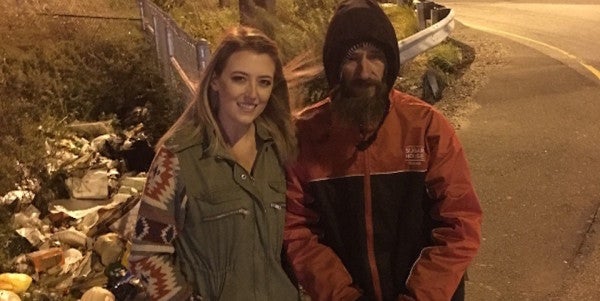 Kate McClure, 27, was driving into Philadelphia on southbound I-95 last month to visit a friend when her car started sputtering. She pulled onto the nearest exit ramp and made it to the bottom just as she ran out of gas. It was 11 p.m. Dark. She was alone.

“My heart was beating out of my chest,” McClure said. “I didn’t know what the heck to do.” She called her boyfriend, Mark D’Amico, 38, who said he’d come get her.

That’s when Johnny, a homeless man who often sits on the guard rail at the exit ramp, reading a book, depending on the kindness of strangers, appeared out of the night.

Johnny told her to lock her doors and sit tight. “He said, ‘I’ll be back. Trust me,’” said McClure, who works for the New Jersey Department of Transportation.

“Ten minutes later,” D’Amico said, “she called me and said the guy brought her gas.”

It turns out Johnny had spent his last $20 to buy gas a few blocks away.

McClure had no cash to pay Johnny. She promised to come back and repay him. He trusted her as she had trusted him, and one random act of kindness soon inspired another.

The next day, the Florence, N.J. couple drove by, thanked Johnny again, and repaid him. “We drove away and went on with our lives,” D’Amico said. But they kept returning, giving Johnny a few dollars each time, and talking for a few minutes.

They learned he is Johnny Bobbitt Jr., 34, from the Raleigh, N.C., area. He was an ammunition technician in the Marines. His Facebook page includes photos and posts that trace a romantic relationship from its happier days to its 2014 breakup. He studied hard while training to be a paramedic and then worked long shifts, according to his Facebook posts, where a smiling Johnny stands tall in front of a medical rescue helicopter. In August 2014, Johnny posted that he aspired to be a flight nurse.

D’Amico, a building contractor, said one day they were talking about luck in people’s lives. “Johnny said, ‘Yeah, tell me about bad luck. But don’t get me wrong. I’m here because of my own decisions. I got nobody to blame but myself.’ ”

A friend in North Carolina who had been close to Johnny said he has a “good heart,” was a talented paramedic, and was smart enough to become a doctor. The friend, who did not want to be identified by name, said Johnny’s life took an unfortunate turn because of drugs, and eventually money problems. According to public records, he had involvement with the criminal justice system in North Carolina.

In perhaps a premonition of his future, Johnny posted in November 2014: “It’s never too late to turn it all around. Be honest with yourself and others.”

He’s been homeless in Philadelphia for a year and a half.

The couple was struck by Johnny’s willingness to take responsibility for his situation, and by his caring attitude toward two homeless buddies he lives with under a bridge.

Recently, D’Amico texted McClure, “I can’t stop thinking about this guy. I think about him all the time.”

To his surprise, McClure texted back, “OMG! Me, too!”

D’Amico went through his old winter clothes and pulled out an Eagles hoodie, a black knit cap, and black insulated gloves. He and McClure went to a Target and bought a six-pack of tube socks, a bunch of granola bars, and basic toiletries. They put everything into a backpack and brought it to Johnny, along with a blanket and two $10 Wawa gift cards.

“He was very excited,” D’Amico said. “He shook my hand and he gave her a bear hug,” McClure said, “He said he’d go to Wawa right away and buy dinner. He loves the pepperoni hoagies.”

“And the pepperoni and cheese bagels,” D’Amico said.

McClure said Johnny made it clear that he would share their gifts with his two buddies. “They all look out for each other,” she said. “Mark and I got back in the car and we were like, ‘Man, if we could change this guy’s life.’ And that’s when we came up with the idea of GoFundMe.”

The fundraiser has exceeded their $10,000 goal (It was at nearly $200,000 at time of publication). The couple made it clear that they would manage all the GoFundMe donations, using them to rent an apartment for Johnny and pay for his food, clothing, cellphone, and transportation, and giving him a small amount of cash for walking-around money.

“Johnny has reflected on his life,” D’Amico said. “He just needs a push in the right direction. I can’t imagine how hard it is. He’s from the Carolinas. He’s a thousand miles from home with nothing, nobody. Things probably snowballed to where he’s living under a bridge.”

McClure said Johnny told them he wants to live in Robbinsville, N.J., and work at the Amazon warehouse there because the company offers health benefits.

“He definitely has the drive,” D’Amico said. “He doesn’t want to be on the streets anymore. He wants to be a functioning member of society and not be sitting on a guard rail in Philadelphia.

McClure said that maybe what they’re doing for Johnny is selfish in a way. “Just to see him react the way he does is such a good feeling,” she said. “I mean, it really feels good.”