Women Deserve The Same Opportunities As Men, Including Registering For The Draft 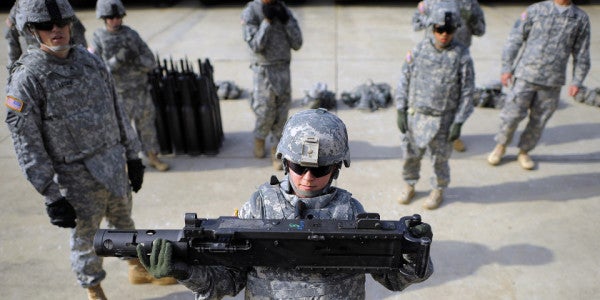 In the spring of 2004, I met a Marine while I was at the gym at Fort Leonard Wood, Missouri. We decided to grab breakfast together. We were both young captains and we split the tab. Fast forward almost 13 years, that same Marine still eats breakfast with me. It’s only a gesture now, but we still take turns paying.

Today, we are both military reservists, athletes, and parents with full-time jobs. Our mutual respect for one another allows us to share our duties inside and outside of the home. Both of our kids are enrolled in the same sports and extracurricular activities, often competing and training together even though one child is a boy and the other is a girl. Even though we all bring have differing capabilities and skillsets, each member of our family contributes to building our lifestyle. My kids deserve to have the same opportunities to shape the world they live in, regardless of gender, which includes registering for the draft and serving their country.

On Nov. 29, Congress dropped the provision requiring women to register for the draft from the annual defense authorization bill after both the House and Senate Armed Services committees had narrowly passed the inclusion earlier this year. Instead, the new provision calls for a review of the entire Selective Service system and a study on women joining the registry.

Related: Give Women All The Rights Of Citizenship, Including Selective Service »

A review of the draft isn’t a bad thing. Currently, the government requires any man, aged 18–25, to register for Selective Service. This includes those with mental and physical disabilities, recorded jail time, varying immigration status, and specific religious callings. The current system is setup to only send capable, qualified men forward. A review of Selective Service will find that the most capable personnel to defend our nation during time of war do not exist solely within the less than half of the population that currently has to register, which is why I support it. Updating the system is a must, but part of fixing the antiquated system is to require women to also register.

Many are concerned that women will be drafted and then thrown to the front lines unprepared and incapable of completing their assigned mission. But, why would people assume the same rules and qualifiers that are currently applied to men wouldn’t also be applied to women? Regardless of gender, our military ranks will only be filled with capable and competent personnel who can fight and win under the current battlefield conditions.

Meanwhile, the current male-only Selective Service system negatively impacts our culture by undermining women’s opinions concerning military use and foreign policy based on the implication that war has minimal impact on mothers, sisters, and daughters. It implies that women must be taken care of should societal conflicts escalate to the point of enacting the draft. Unfortunately, that also reinforces the perception that since women aren’t expected to make the same sacrifices as men, their opinion doesn’t count.

I know that my husband, and many men like him, is more than willing to pick up the check for our nation's freedom, but he shouldn't have to. If that terrible day ever comes when our country calls, America will need her best and brightest individuals, regardless of gender. If the requirement is so great that the nation must call upon non-volunteers, the pain of sending our sons to fight will not be any less than the pain of sending our daughters. Our young men and women are valuable, and so is our freedom. We are stronger if we stand together.

If we continue to protect our young girls while telling our boys to “man up,” it is impossible for women to have an equal voice at the table where critical decisions are made. In this great nation, where we enjoy all the benefits of a freedom that isn’t free, it’s time to let women pay their half of the check.