Marine Cpl. Henry Andregg Jr., who died in one of the bloodiest Pacific Theater battles against Japan in World War... 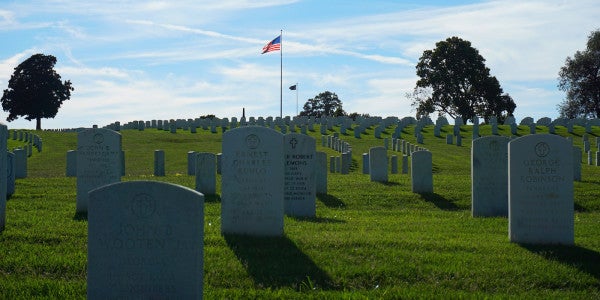 Marine Cpl. Henry Andregg Jr., who died in one of the bloodiest Pacific Theater battles against Japan in World War II, has come home to his final resting place.

The 22-year-old Whitwell, Tenn., native lost his life on Nov. 20, 1943, on the first day of fighting at Betio Island, which is part of the Tarawa Atoll in the Gilbert Islands. For decades he lay, unknown, at the National Memorial Cemetery of the Pacific in Honolulu. Modern DNA analysis confirmed his identity in May.

On Friday, he received full military honors in a ceremony at the Chattanooga National Cemetery. Nieces and nephews gathered to welcome their long-lost uncle home.

“For inasmuch as Corporal Andregg's spirit has long departed his body, we do commit these remains, at last, to their final resting place in the earth from whence they came,” said Brenda Woods, the pastor of Sulphur Springs United Methodist and Looney's Creek Chapel United Methodist Church in Whitwell. “Earth to earth, ashes to ashes, dust to dust.”

Above, the United States flag flew at half-staff, in accordance with the day of mourning declared by Tennessee Gov. Bill Haslam in honor of Andregg's “ultimate sacrifice.”

“We never thought this day would come,” Dot Rogers, one of his nieces, said after the ceremony. She last saw her uncle when she was 16 years old.

Nancy Harris, another niece, said her mother — Andregg's sister, now deceased —always wondered what happened to his body. Until a few years ago, she said she figured the family would never know because it had been so long.

That changed a couple of years ago when she saw other deceased servicemen were coming home after DNA tests identified them, she said, adding she “kind of felt it in her heart” he might return one day.

“I thought if Uncle Henry could come home, that would be the most awesome thing,” Harris said.

Harris said she was very thankful for all the support the family has received for its returning uncle.

After the remains landed in Atlanta on Wednesday, they were escorted by the military, Georgia State Patrol and motorcyclists with the Patriot Guard Riders, Harris said.

“People lined the roads” on Highway 28 to pay respects when they brought her uncle home for services in Marion County, she said. Even more people from the Whitwell and Jasper communities showed up to honor him as they went to the Chattanooga National Cemetery on Friday.

“We are honored to have the chance to recognize the valor of this American hero and to remember the loss suffered by his family, friends and community,” Tennessee Commissioner of Veterans Affairs Many-Bears Grinder said Thursday.

Marine 1st Sgt. Bill Conner, a casualty assistance calls officer, helped shepherd the family through the process of bringing Andregg home and escorted his remains from the time they left Hawaii.

He was honored “to be there with the family — it's a great family — to let them know he's going to be coming home,” Conner said.