This Wounded Soldier Came Back From Afghanistan A Hero. Then He Was Demoted

In January 2013, Sgt. Joe Schicker was Missouri’s hero. A member of the Missouri National Guard, he had been injured … Continued 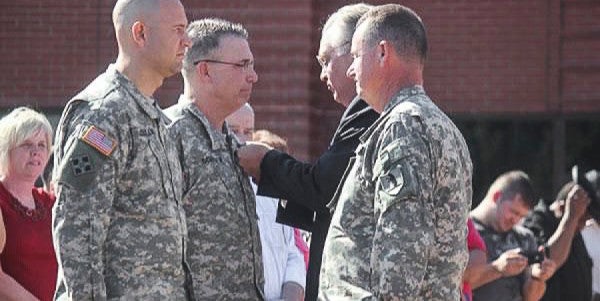 A member of the Missouri National Guard, he had been injured while deployed in Afghanistan. When he returned to Missouri, none other than Gov. Jay Nixon pinned the Purple Heart on Schicker’s battle fatigues. Then Schicker stood in the House gallery in his dress blues as Nixon gave his annual State of the State address and received a standing ovation from state lawmakers.

“Just hours after his team arrived at their base, Taliban insurgents attacked,” Nixon said of Schicker. “In successfully repelling the attack, several Missouri Guardsmen, including Sgt. Schicker, were wounded. … Sgt. Schicker, you represent every man and every woman who has ever fought to defend our great nation, in every era and on every field of battle.”

Today, he can’t talk without shaking. He gets dizzy and has headaches. He’s missing his two front teeth from a fall. He’s had 26 pieces of shrapnel removed from his body from that Oct. 15, 2012, attack.

Shortly after Schicker returned from Afghanistan, this time without the cameras running and the governor gushing, he was demoted. It wasn’t because of anything he did wrong. Schicker was a full-time Guardsman, paid at the Army’s E-8 rank, assigned to the Homeland Response Force at Jefferson Barracks in St. Louis. This is the unit that does highly technical work sweeping Busch Stadium before big events, for instance. It was one of the first Guard units on the scene in Ferguson.

When Schicker returned from serving in Afghanistan, he was told there wasn’t an E-8 rank slot available for him in his unit. If he wanted to keep the same job, he would have to accept a demotion to E-7. Otherwise, he’d have to find another job in a different unit.

Schicker, the returning hero, asked for an exception to be made. Could he be double-slotted? Could he be assigned to another command but still do the important work he was qualified to do?

No way, said the Guard. Rules are rules.

That’s what a military lifer does. Schicker, who lives in Dittmer, joined the Army right out of high school. He lived in Shrewsbury at that time and graduated in 1978 from Bishop DuBourg High School in the city. He ended up in special forces. Schicker was deployed four times. He has taken sniper fire and won two Bronze Stars, three Army Commendation Medals and two Purple Hearts. He has post-traumatic stress disorder.

“I saw a lot of people die,” Schicker said.

In 2015, he found out the Missouri Guard had lied to him. At least two other soldiers — both higher ranks than Schicker — were granted exceptions to the rule the Guard cited in forcing him to take a demotion.

At this point in Schicker’s career, it wasn’t the rank that bothered him. But as he neared retirement, his final rank could make up to a $600-a-month difference in his retirement pay.

In 2016, Schicker sought a promotion to sergeant major. He was denied because his previous demotion reduced the amount of credit he would have otherwise earned for his service in the Enlisted Promotion System board.

“I would have qualified if they hadn’t made me take the demotion,” he said.

Schicker complained up his chain of command and got no help. He filed a complaint with the inspector general. He called Nixon’s office. “I couldn’t get a return call,” he said.

So he wrote to U.S. Sen. Claire McCaskill.

Danner gave McCaskill the same answer he had given Schicker. Rules are rules. He told her that Schicker would be eligible for promotion in February 2017.

That was four months ago. Schicker was denied promotion again.

Because of his previous injuries, he’s unable to attend the Sergeant Majors Academy. So the promotions board said this year he was once again ineligible for the rank he should have long ago been awarded.

This time Danner admitted that “on a very limited basis,” exceptions had been made to the rule that forced Schicker to take a demotion, but that the wounded veteran who was treated like a returning hero didn’t qualify.

Schicker is still in the Guard. He is on convalescent leave and has brain surgery scheduled for later this year. He hopes that will fix the shaking and the headaches. He spends a fair amount of time at the VA in St. Louis, where he sees plenty of those men and women Nixon referred to in his speech, who represented the country “on every field of battle.”

“They paraded me around the state when I came back and said, ‘Look, he’s one of our heroes,’” Schicker said. “Now, they don’t care. I’ve been wronged and no one wants to help me.”