A Year In, SEALs Still Haven’t Seen Any Female Applicants 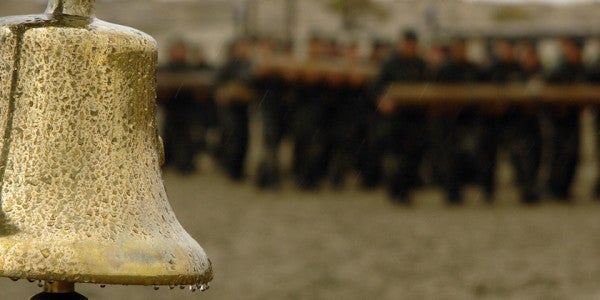 A little more than 12 months after training pipelines for previously closed elite special operator jobs opened to women, the U.S. military has yet to see its first female Navy SEAL or Green Beret.

The component commanders for each of the service special operations commands say they're ready to integrate female operators into their units, but it's not yet clear when they'll have the opportunity to do so.

The Navy is closely monitoring the interest of female applicants. In fact, Naval Special Warfare Command is eyeing one Reserve Officer Training Corps member who's interested in the SEALs, and another woman who has yet to enter the service but has expressed interest in becoming a special warfare combatant craft crewman, a community even smaller than the SEALs with a training pipeline nearly as rigorous.

But it will likely be years until the Navy has a woman in one of these elite units.

Rear Adm. Tim Szymanski, head of Naval Special Warfare Command, which includes the elite SEALs and other Navy special operations units, noted that the enlisted training pipeline for SEALs is two-and-a-half years from start to end, meaning a female applicant who began the process now wouldn't join a team until nearly 2020.

Related: What Air Force Combat Controllers Go Through To Earn Their Titles »

And that assumes that she makes it through the infamously grueling Basic Underwater Demolition/SEAL training.

“Just last week, we secured Hell Week … 165 folks. We finished with 29. It's a tough pipeline and that is not uncommon,” Szymanski told an audience at the National Defense Industrial Association's Special Operations/Low Intensity Conflict conference near Washington, D.C., on Tuesday. “Five classes a year, and that's what you have, demographically.”

While the Army Rangers famously had three female officers earn their tabs in 2015 in a special program ahead of the December 2015 Defense Department mandate that actually gave women the right to serve in the Rangers, the elite regiment remains male-only, at least for now.

To date, one female officer in a support military occupational specialty has completed the training process and will likely join the unit by the end of March, said Lt. Gen. Kenneth Tovo, commander of Army Special Operations Command.

In other previously closed Army special operations elements, he said, two enlisted women have attempted special operations assessment and selection but haven't made it through. One, who was dropped due to injury and not to failure to meet standards, is likely to reattempt the process, Tovo said.

Two female officers are also expected to begin assessment and selection in the “near future,” he said.

“So we're going slow,” Tovo said. “The day we got the word that SF and rangers were available to women, our recruiting battalion that actually works for recruit command sent an email to every eligible woman, notifying them of the opportunity and soliciting their volunteerism. We are working things across the force through special ops recruiting battalion to talk to women and get them interested.”

Marine Corps Forces Special Operations Command was the first service to report publicly that it had women in its training pipeline. But in a year, MARSOC has had just three applicants, and none who made it through the first phase of assessment and selection, commander Maj. Gen. Carl Mundy III said at the conference. Currently, he added, there are no women in training, and none on deck to enter the pipeline.

The Air Force, which opened its combat control, pararescue and tactical air control party jobs to women last year, has had several applicants, but all have been dropped from training due to injury or failure to meet standards, said Lt. Gen. Marshall Webb, commander of Air Force Special Operations Command.

“I think this is a slow build … and we'll keep after it,” Webb said, noting that that the service observed similar trends when it opened other jobs up to women decades ago. “AFSOC is looking for the highest caliber candidates, and when a person meets that standard, she will be joining our ranks.”

For some of the services, the challenge is twofold.

Tovo said Army Special Forces recruits primarily from the infantry, which opened to women at the same time SF did. And women are moving quickly into these previously closed jobs; the first 10 women graduated from the Army's infantry officer course in October, and 140 women are reportedly on deck to enter infantry training in 2017, while more have already been reclassified. But it's still a small field.

MARSOC also recruits heavily from Marine Corps ground combat MOSs. To date, just three female Marines assigned to one of these jobs have entered the fleet.

“This is a process; it's going to take time,” Tovo said. “We are focused on it, we're ready for it and I have no doubt when we get the opportunity to put women through our qualification courses, it going to be done to a professional standard and we will be proud of the results of the female operators who come out the other end.”

Szymanski suggested that social barriers to women serving in units such as the SEALs may no longer be the impediment they once were, as younger, more tolerant sailors enter the force.

“The students coming through, it's no big deal to them,” he said. “This generation's much more tolerant of society than our generation — a multi-diverse, gender-neutral society. Some of the integration will be with our older cohorts.”

It's possible, however, that the services will have to rethink recruitment in light of a widened field of potential applicants. Szymanski said his contracted SEAL scout teams visit high schools to recruit talent, but tend to target events with high male participation.

“Typically in the past, that's been things like wrestling matches and those types of things,” he said. “So I now have to be sure that they're thinking about, how do they incentivize or attract younger females at some of those events. Maybe swimming meets; swimmers typically will fend well in the pipeline if they're good in the water.”