Saturday’s Army-Navy Game Promises Pride, Power, And Not Much Passing

The last week of college football’s regular season is reserved for the truest of all amateur sporting events. With no … Continued 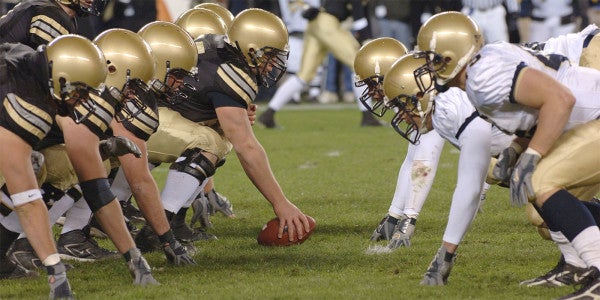 The last week of college football’s regular season is reserved for the truest of all amateur sporting events. With no other games this Saturday, teams from West Point and Annapolis take the field in Philadelphia before a captive national audience. The Army and Navy squads carry few — if any — NFL prospects, so the game is a true showcase for amateur competition on college football’s national stage.

“My favorite part about the game is the pure competition,” Navy head coach Ken Niumatalolo told reporters during the annual Army/Navy week press conference. “That, and the respect factor in this game separates it from other games.”

The 118th version of this rivalry promises to be one of the most competitive in recent history. After 14 straight losses, Army last December handed Navy a 21-17 defeat to end “The Streak.”

‘We’ve got a program now’

That win was a turning point for the Black Knights, helping propel them to an 8-3 record this year. Behind senior quarterback Ahmad Bradshaw, the Black Knights are the No. 1 rushing team in the nation, cruising to over 368 yards per game. In true triple-option fashion, Army has attempted the fewest passes in the country, completing a mere 16 throws on the season out of only 60 attempts with 5 interceptions.

“That was definitely a big part of our confidence going into this season. Guys feeling like we’ve got a program now, that we believe we can win,” said Army head coach Jeff Monken. “As it happens over and over again, there becomes this opinion that your program is inferior, that you can’t beat your rival.”

That sense of inferiority no longer holds. Army finished undefeated at home and earned its second bowl appearance in as many years. Unlike in past years, Army has swagger and feels it can win.

Navy looks for a course correction

That confidence may be key against a Navy team that has lost five of its last six games after a strong start to the season.

With an uncharacteristic 6-5 record, the Mids have stumbled through the autumn with uncertainty at the quarterback position. Navy has played 3 different quarterbacks over 11 games, using juniors Zach Abey and Garret Lewis under center along with sophomore Malcolm Perry, a converted slotback. Using a similar version of the triple-option offense, the Mids are currently ranked second in the nation in rushing, averaging 347.5 yards per game. Much like Army, Navy does not throw the ball often and is ranked 128th in the country in passing surpassing only Georgia Tech and Army.

Check out 'Bama, Georgia, Notre Dame, and Oregon looking up at all those service academies.NCAA

It is safe to say the forward pass has a solid chance of not being seen much on Saturday.

The triple option offense provides the Service Academies with a great equalizer against larger and faster FBS teams. But in this interservice rivalry, the two teams are fairly evenly matched. Thus the game is poised to be one of the best competitions in the last decade—even down to the uniforms.

In the last few years, both Army and Navy have worn specially crafted uniforms for the big game, designed by Nike and Under Armour, respectively. This year, the Black Knights’ uniforms will honor the 10th Mountain Division with an all-white jersey and gold numerals. (You can read all about it at at Nike’s popup website, beatnavyuniform.com.) The 10th Mountain Division fought in the Italian mountains amidst harsh winter conditions during World War II.

Navy will sport uniforms with F/A-18 fighter jets on the helmet in tribute to the Blue Angels, the Navy’s premier jet demonstration team.

Are you ready for #ArmyNavy? @NavyFB will be wearing Blue Angels-inspired uniforms for the 118th Army-Navy Game! pic.twitter.com/qndiFz1tcQ

The race to win the cup

But shiny uniforms don’t help you with blocking and tackling, and with so much at stake, both teams know service personnel across the globe want bragging rights. This will be the first time since 2012, and the seventh time overall, that the Commander-in-Chief’s Trophy will be on the line in the Army-Navy Game. The CINC trophy is awarded annually to the winner of the service academy competition between Air Force, Army, and Navy, and it will be on the sidelines for Saturday’s competition.

“We knew that for emotional purposes and motivational reasons, to have that trophy on the sideline was imperative and really takes the game to another level,” Naval Academy athletic director Chet Gladchuk said.

As one of the most enduring rivalries in college football, Army-Navy certainly rises to another level — not because of hatred for the other team, but because of respect for your opponent. Both sides know that after the final whistle, their opponent becomes their teammate in defense of the country. At a time when it seems our national fabric might be unraveling at the seams, along comes a group of 20-year-old midshipmen and cadets to remind us of what makes our country great.