In a recent letter to the editor published by Air Force Times, retired four-star Gen. Roger A. Brady weighed in... 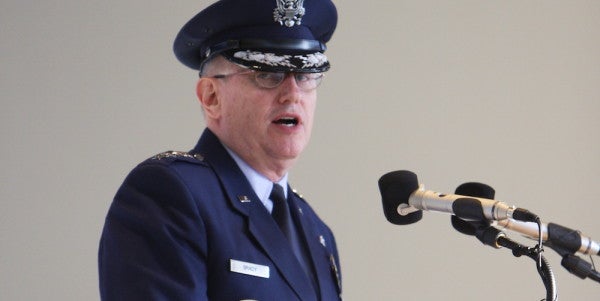 In a recent letter to the editor published by Air Force Times, retired four-star Gen. Roger A. Brady weighed in on the issue of members of the Air Force communicating with Congress. Brady’s letter comes on the heels of an investigation into Air Force Gen. James Post, and his comments to a group of Air Force officers, wherein he informed them that communicating the capabilities of the A-10 to Congress would be considered “treason.” Brady attempts, rather unsuccessfully, to come to the defense of Post, who was fired for his speech about “treason,” as detailed by Tony Carr on John Q. Public.

After reading Brady’s letter, a quote by Supreme Court Justice Antonin Scalia springs to mind: “One might understand the Court’s eagerness to enter this field … if it had something useful to say.”

Brady’s letter misrepresents both federal and military law and unnecessarily confuses the issue of the absolute right of members of the Air Force, and all other services, to communicate directly with Congress. In the most troubling passages of his letter, Brady states airmen speaking to Congress “are simply insubordinate — they have denied the authority of their senior leadership” and “airmen taking their personal, opposing views directly to Congress is prejudicial to good order and discipline.” He is absolutely wrong on both counts.

Brady writes that Post’s characterization of airmen speaking directly to Congress as “treason” was inappropriate. Then in a rather puzzling passage, Brady maintains that airmen communicating directly with Congress is an act of “insubordination” and conduct that is “prejudicial to good order and discipline.” He also asserts airmen communicating with Congress is not issue of “free speech” and that “encouragement of insubordination by Congress is also troubling.”

Brady’s letter is woefully ignorant of the mechanics of the Uniform Code of Military Justice. Insubordination is a specific crime under the UCMJ with a defined universe of victims: noncommissioned or petty officers. That is to say, insubordination only occurs when an enlisted member disobeys the lawful order of a noncommissioned or petty officer. So any discussion of insubordination regarding Air Force officers communicating with Congress is inapposite. Also, as I’ll get into later, enlisted airmen also enjoy the absolute right to communicate with Congress.

Even giving Brady the benefit of the common definition of insubordinate, “disobedient to authority,” he is still suggesting contact with Congress is a crime. Federal law and Air Force regulations plainly demonstrate that Brady is mistaken.

Giving Brady the benefit of doubt on the specific UCMJ articles, he may have intended to say that communication with Congress represents a disobedience offense under Article 90 or 92 of the UCMJ. This would presuppose that a superior commissioned officer would issue an order prohibiting service members from communicating with Congress. Beyond the imprudence of attempting to issue such an order, if issued, it would be a nullity from its outset. A commander, no matter the rank, cannot override federal law by issuing a contradictory order.

The law could not be more clear, “No person may restrict a member of the armed forces in communicating with a Member of Congress.” This is codified in 10 U.S. Code § 1034. The law is correspondingly incorporated in Air Force Instruction 90-301. Furthermore, Air Force Secretary Deborah Lee James and Chief of Staff Gen. Mark Welsh issued a memorandum, as originally reported by the military blog John Q Public, reiterating that airmen are allowed to communicate with Congress “without fear of reprisal.” This disposes of Brady’s argument about “free speech.” There is no need to conduct a First Amendment analysis when military leadership has clearly indicated that all service members are free to communicate with members of Congress.

In addition to his assertion that communicating with Congress is an act of insubordination, Brady maintains that airmen communicating with Congress is “prejudicial to good order and discipline.” However, Article 134, clause (a), makes all conduct “which prejudice good order and discipline in the armed forces” a crime. Thus, Brady is plainly stating that airmen, when exercising a right codified in Federal law and Air Force regulations, are committing a crime under the UCMJ. This is obviously not the state of the law.

Turning to Brady’s proposition that Congress encouraging insubordination is troubling. First, the U.S. Constitution specifies that Congress shall “make Rules for the Government and Regulation of the land and naval Forces.” Congress defines all military regulations including insubordination. Congress has clearly defined the crime of insubordination and the absolute right of service members to communicate directly with Congress. If Congress passes a law granting service members the absolute right to communicate with Congress that ends the discussion. No member of the military may criminalize this conduct.

Apparently Brady failed to fully internalize the lessons of “Schoolhouse Rock” — after a bill becomes a law, it is the law of the United States.

Further, Brady’s arguments are internally self-contradictory. He states that airmen “are within their legal rights” to contact Congress. Then in the next sentence he asserts that if an airmen contacts Congress “they are simply insubordinate.” Brady concludes that “airmen taking their personal, opposing views directly to Congress is prejudicial to good order and discipline.”

If airmen are within their legal rights when contacting Congress, that same action, ipso facto, cannot simultaneously constitute the criminal acts of insubordination and conduct prejudicial to good order and discipline.

In an ironic twist, Brady demonstrates precisely why Congress has ensured that all service members are free to communicate with Congress. Brady’s entire argument is globally and specifically inaccurate. On the global issue of constitutional responsibility for promulgating rules for the governance of the armed forces, he fails to recognize the primacy of Congress in this realm. On the specific issue of the definitions of criminal misconduct under the UCMJ, he is wildly inaccurate or ignorant.

Brady makes much of the experience and perspective of senior officers, clearly stating that subordinates have nothing to add to the discussion. To use the colloquial phrase, Brady is telling all airmen to shut up and color. His former rank, however, cannot override his factually inaccurate statements.

Some of my arguments may ring as overly critical of Brady’s opinions. But it must be remembered that Brady was a four-star general. If he treated his briefings to Congress with the same imprecision and poorly considered conclusions he demonstrated in this letter. It is no wonder that Congress ensured opinions from members of the military other than senior leaders are available, if this letter represents the quality of analysis presented by senior Air Force officers.

In sum, there is nothing to be gained from reading Brady’s letter. He only clouds the issue with imprecise language and bluster. Congress has been unambiguous — any member of the military, not just senior military officials, is free to communicate directly with any member of Congress.