Your Soldiers Are Not Your Children. Treat Them Accordingly 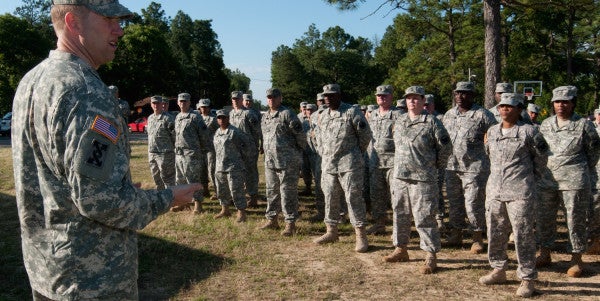 Shakespeare’s St. Crispin’s Day speech from Henry V is one of the most iconic speeches ever given in literature. It captures what it is like to be a fighting man or woman.

And Crispin Crispian shall ne’er go by,

From this day to the ending of the world,

But we in it shall be remembered-

We few, we happy few, we band of brothers;

For he to-day that sheds his blood with me

Shall be my brother; be he ne’er so vile,

This day shall gentle his condition;

Its refrain about a “band of brothers” has been repeated and echoed countless times, from Gen. Dwight D. Eisenhower’s “in company with our brave Allies and brothers-in-arms on other Fronts” speech on D-Day to Stephen E. Ambrose's 1992 book “Band of Brothers,” and in countless addresses by senior leaders to their formations prior to crossing the berm in Iraq.

The idea of soldiers as brothers in arms — of the fraternity of arms — goes back well before Shakespeare to the feudal era and possibly even earlier. The concept of shared struggle, and thus equality, is essential to the concept of American soldiering and always has been.

And yet, under multiple well-meaning commanders in both active and reserve components, I have been instructed to treat my soldiers as my children. Not as my brothers or my sisters, but my children. As a troop commander, I once argued the point with my squadron commander that my soldiers were not my sons and was told,“You know what I mean” — and I did.

And what he meant was wrong.

A leader’s soldiers are not her children. A subordinate is not a son or a daughter. A subordinate is a brother in arms, an equal of sorts, and just like between older and younger siblings, there can still be rank in equality.

I have both children and siblings. I love my children and I love my brother and sister, but the way I treat them and the way I conceptualize our relationship is completely different. My younger brother, himself a combat veteran, has his own children and his own job — his own life.

I ask him for advice and he does the same with me. We both have very different perspectives; I was an officer and he was an noncommissioned officer, but we both respect what each brings to the table. I am raising my son; I did not raise my brother. We grew up together. We adventured together, fought each other, bled with each other. Out of that, out of our shared experiences and triumphs and hardships, my brother has earned my respect and I have earned his.

And there is the crucial difference. When leaders treat their soldiers like their children, they rob their soldiers of the chance to earn that respect and the leaders themselves slip into a dangerous trap of assuming they’re respected before they’ve earned it.

My brother and I shared in the experience of maturing and becoming who we are together. It is the same between the leader and the subordinate, no matter what the rank. To be sure, a lieutenant colonel or a sergeant major is in a far different place in their maturity than a young private or buck sergeant, but even colonels and sergeant majors do have subordinates they can learn from and grow with, particularly among their seasoned noncommissioned officers, other field grades, and even experienced company-grade officers. The lower you go down the chain of command, the more opportunity there is for junior leaders to learn and grow from the soldiers they lead — from their brothers and sisters in arms.

When leaders encourage subordinates to treat their soldiers as they would their children, they infantilize those same soldiers and miss the opportunity to learn from them. My brother can give me a franker and well-reasoned assessment of things I need to improve than can my son.

It isn’t just subordinates who are hurt by this concept of the soldier as child either. Adults respect other adults based on their conduct, their reputation, their value to the team and adherence to shared values. Children, on the other hand, respect their father and mother because they are the most constant adult presence in their life, the guardians of the home, and providers of both food and discipline. Children, especially younger children, have no choice but to respect their parents because they don’t have any frame of reference.

By the time soldiers reach the Army, this is no longer true. Soldiers are grown men and women, and while they will provide a certain amount of respect and deference based on rank, it isn’t worth much more than a salute or proper form of address.

Respect, as every leader in the Army has been told, must be earned.

Meanwhile, fathers assume their children will listen to them by virtue of their position. Put in those terms, the disconnect and danger are obvious. Leaders who take on the paternal role are forgetting they don’t have an automatic right to respect. They’re forgetting that age-old truism about earning that respect and about respect being a two-way street. The paternal leader may treat his subordinates as his children, but he has not earned the right be treated as their father. When he assumes his charges are his children, he assumes he will be listened to as children listen to their parents. This is hubris of the highest degree, and it will blind a leader to others’ good ideas and to his own failings.

So why do leaders do it? Why do they tell their troops they will care for them as they would their own children? I’m not sure, but I think it is because they want to emphasize to their soldiers how much they care for them. If this is indeed the reason, I suggest that Shakespeare’s “band of brothers” concept does it far better than assuming paternal airs.

When Henry V says, “For he to-day that sheds his blood with me Shall be my brother,” he demonstrates a profound love and respect for his men that often escapes notice in the modern age. Henry V, the king in an era of absolute monarchies, raises his men to his level, to the brothers of the reigning monarch. He makes men not children but the sons of a king. Likewise, when Henry says he is his soldiers’ brother, he debases himself to their level. His words diminish his divine right and put him at the same level as his soldiers who were likely members of England’s underclass — unrecognized bastards, cutthroats, drunks and debtors.

Leaders, when you truly care for and love your subordinates, you will see them as your brothers and sisters, not your children. Only then can they be that “happy few” and the entire organization may truly be the “band of brothers” soldiers desperately want to join.