The Moose and matrimony are a match made in heaven. 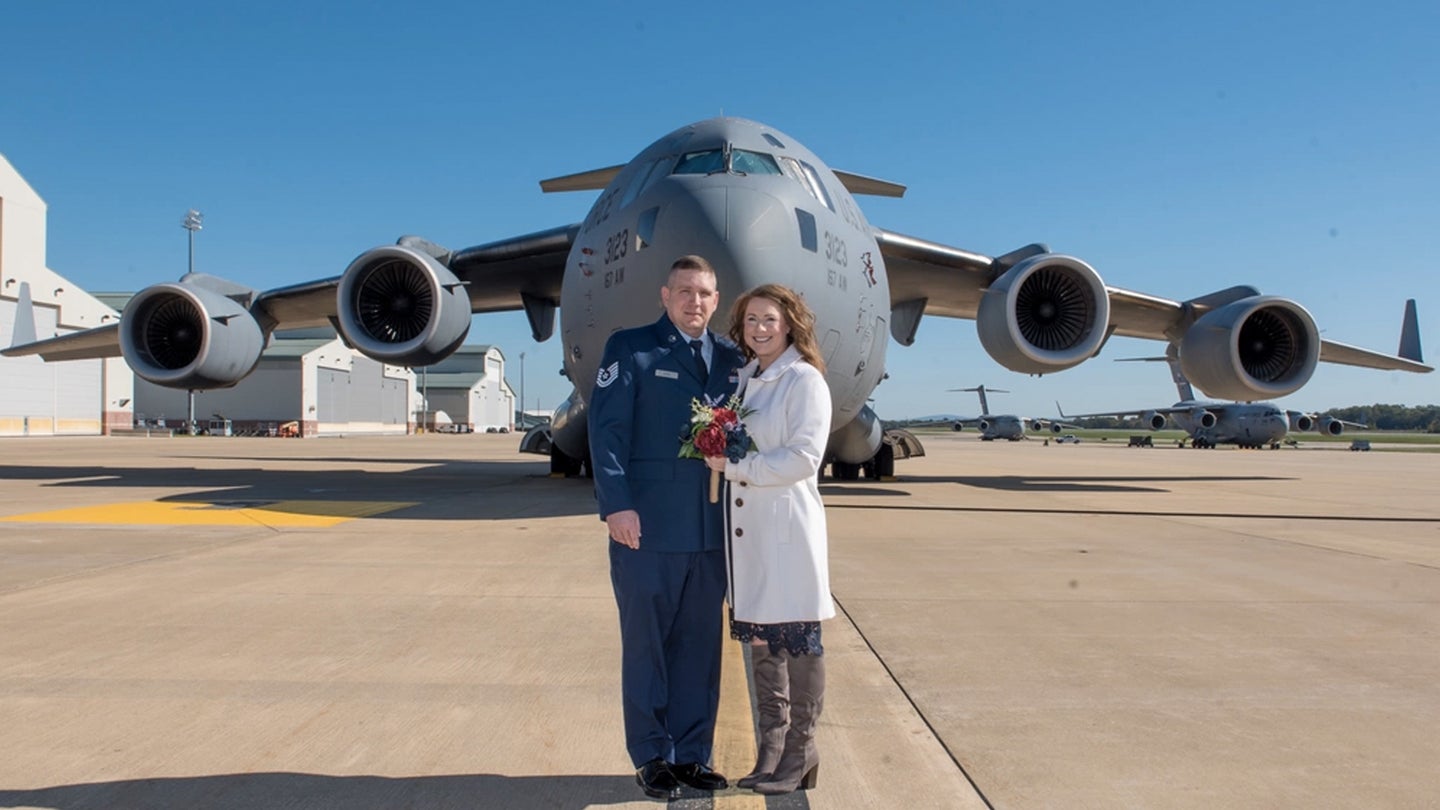 Who wouldn’t want their marriage to be capable of intercontinental flight, with a tight runway turning radius and strong enough to carry a battle tank? That could be the symbolism behind Air Force Tech Sgt. Jonathen Guzik and his wife Angela getting married in a C-17 Globemaster III cargo jet last month at the West Virginia Air National Guard base in Martinsburg, West Virginia.

Strangely enough though, when Angela first suggested they get married aboard the aircraft, Guzik’s first thought was “no chance,” according to a recent Air Force news release.

An aircraft metals technician with the Guard’s 167th Maintenance Group, Guzik spends a lot of time working with C-17s, and knowing how tight security around a flight line is, he thought it would be tough to actually coordinate a ceremony aboard one. But Angela, a Navy brat, was excited about the idea.

“Everything went off without a hitch,” she said. “It went great and we’re super happy.”

Known for its strength and reliability the C-17 is a great platform with which to associate one’s wedding. Maybe that’s why at least two other couples have also tied the knot aboard the jet.

“To finally have it all come together, where we had clearance to have our families join us and our squadron available to celebrate our union on the aircraft that has [served] so many of our friends and service members, was beyond an honor,” Capts. Derek and Amanda Martindale, two 315th Aeromedical Evacuation Squadron flight nurses, said about their wedding aboard a C-17 at Joint Base Charleston, South Carolina in May 2018.

“Yes … but it was Michelle,” Jennifer Speer, Michelle’s mother, said. “I think it’s in her personality.”

Another romantic reason for having a wedding aboard a C-17 is its nickname, “The Moose.” The aircraft earned that moniker because when it is refueling, pressure relief vents on the machine make a distinct sound resembling that of a female moose in heat. I personally find that very romantic (and so do male moose), but whatever the reason, weddings are not the only major life event to have occurred aboard the C-17.

For example, earlier this year, after fleeing from war-torn Afghanistan, an Afghan mother named her daughter ‘Reach’ after the call sign of the jet she was born on while flying from Qatar to Ramstein Air Base, Germany. At least one other child was also born to Afghan refugees aboard a C-17, and one mother went into labor aboard one before delivering the baby in a hospital in Doha, the capital of Qatar.

For nearly 120,000 other Americans, Afghans and other allies who were evacuated from Kabul in August, the C-17 likely represented a symbol of hope: a ticket out of a desperate situation.

“Many see it as just a cargo aircraft. To me, it was always a vessel of hope,” one pilot who flew evacuation sorties out of Afghanistan told Task & Purpose in September.

“Hope for soldiers coming home, hope for foreign aid assisting in natural disasters and national crises,” he said. “Hope for the families who won’t get to hold their sons and daughters again, but will receive closure. To over 100,000 people of Afghanistan, the ‘17 became a vessel of hope and freedom.”

In terms of hosting weddings though, the Moose may have some competition. One Air Force news release documented a wedding that took place aboard a C-130 Hercules, a smaller, albeit still legendary, turboprop transport aircraft that has been in military service since 1956.

“Flying for me has been therapeutic, it is relaxing and I feel in my place up there,” said 1st Lt. Lyndsy Harrison, a navigator with the 700th Airlift Squadron, when she got married to pilot Capt. Will Jones, also with the 700th AS, aboard a C-130 at Dobbins Air Reserve Base, Georgia, in November 2020.

“I never gave up on my dream of flying and went after it,” Harrison said. “During that time Will and I started dating. He encouraged and supported me to reach my goals that I was told were impossible. He continues to motivate and inspire me to be better.”

The couple wed after flying a training mission aboard the C-130 that day, and they wrote “just married” on the back of the fuselage in chalk.

Of course, you don’t have to fly a plane to get married inside one. At Guzik and Angela’s wedding aboard a C-17 last month, their fellow airman, Staff Sgt. Justin Watson, was the best man, Watson’s son was the ring bearer, and Tech Sgt. Corey Chaney officiated the ceremony in front of the cockpit access stairs. Angela’s son walked her down the aisle — the cargo bay —, while the newlyweds’ parents and Guzik’s children stood by the sidewall passenger seats.

“I was truly honored that I could be part of their big day,” Chaney said.