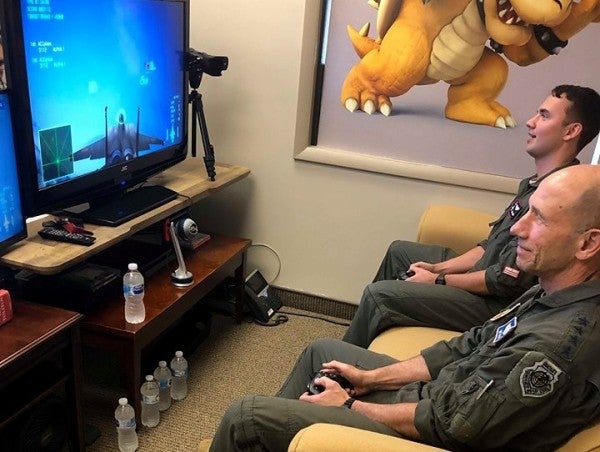 JOINT BASE LANGLEY EUSTIS, Va. — The commander of Air Combat Command and his son fought each other live on a Twitch stream June 29, 2019, in a combat flight action video game.

Gen. Mike Holmes pitted his skill with the F-15 against 1st Lt. Wade Holmes and his F-16 in this exhibition match designed to highlight the Air Force's pilot community and to answer questions from viewers about military service.

“This type of alternative interview format is a really great way to engage with our audience,” said Michelle Clougher, chief of the ACC Public Affairs command information division. “We're always looking for a different way to tell the Air Force story, and these two rock-star pilots have a lot they can share.

“Ten years ago, we never would have thought to have our top fighter pilot play a video game while broadcasting it live to the whole world,” she continued. “But as our technologies evolve, so do we. We must communicate in a way that is meaningful and connects with people.”

Twitch is a live-streaming video service platform introduced in 2011. The service has grown to share video content with more than 15 million daily active users.

During the stream, the Holmeses discussed the Air Force's current pilot shortage, and explained the importance of air battle managers and the communications from the E-3 AWACS. They also expressed their gratitude for all the service's crew chiefs and answered various questions about their aircraft, while sharing stories from their careers.

The pilots gave advice for joining the Air Force and compared real flight versus this arcade simulation. And while the general has more than 4,000 hours in a real aircraft – many of those are combat hours – the lieutenant had the edge with this matchup.

One Twitch user even asked the lieutenant to take it easy on his “old man” toward the end of one match.

“I appreciate that,” General Holmes said with a laugh. “I'm going to feign an injury here in a moment.”

“Air Combat Command does not teach me to take pity on my adversary,” replied Lieutenant Holmes as he secured the win.

The stream lasted for approximately one hour.

“Thanks for tuning in,” General Holmes said to wrap up the event. “We enjoyed having a chance to talk to you for a little bit. As the Air Force, we're trying to reach out to people that could find a home in the Air Force. We hope you'll consider finding a way to serve your country in some way.”