"There were guys who came from every religion and some of them didn't even have one, but they were all crying and thinking about the same thing" 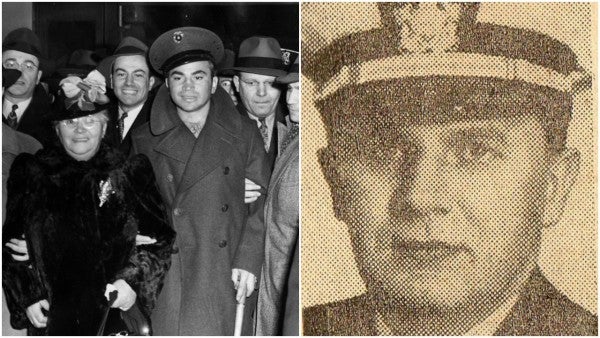 Often when I hear carolers singing, my inner ear segues into “My Yiddishe Mamma.” A schmaltz pop song of the 1920s, it was part of a Christmas Eve service on a World War II battlefield.

Unlikely as that might now seem, it was a perfect musical metaphor for the values our GIs were defending. America was far from perfect; black people were second-class citizens. But it was a beacon of brotherhood compared with the totalitarian countries we were fighting. Japanese soldiers were drilled in the idea that Westerners were barbarians. Germans were taught that Jews were a pestilence that had to be eradicated at Auschwitz and Treblinka.

But on Dec. 24, 1942, a Catholic priest from Brooklyn, New York, and a Jewish boxer from Chicago put together a midnight Mass for U.S. Marines of various hues and creeds. The service was held amid the foxholes of Guadalcanal, a South Pacific island.

The story of the Rev. Fred Gehring and Barney Ross is worth reflecting upon this holiday season when our country is experiencing a wave of virulent intolerance for those who look different or worship differently than we do.

Like Gehring, Ross was once headed to a clerical career. His immigrant father was a Talmudic scholar who supported his family with a small grocery store in the Maxwell Street neighborhood. His fondest dream was that his son would attend a rabbinical seminary.

But when Barney Ross was 13, his father was killed by a stick-up man. Ross’ mother had a nervous breakdown, and his siblings had to be raised by relatives or sent to an orphanage. “It was just fate, I guess that dad was killed,” Ross told Arch Ward, the Tribune’s sports editor, in 1932.

A child of the streets, Ross scraped out a marginal living until discovering the magic of his mitts. He started boxing and wound up the world champion of three weight classes. His purses enabled him to bring the Ross family back together.

Retired from boxing and 33 years old, he enlisted upon hearing that the Japanese bombed Pearl Harbor. The military wanted to send him on morale-boosting tours. But insisting on seeing combat, Ross landed on Guadalcanal with B Company, 1st Battalion, 8th Marine Regiment.

There he met Gehring. They were two peas in a pod.

On Guadalcanal, Gehring rescued numerous missionaries trapped behind the Japanese lines, which earned him the Legion of Merit.

In mid-December, Ross found himself and other GIs trapped in a foxhole surrounded by the enemy. The only one not wounded, he held the Japanese at bay by firing his weapon and throwing grenades all night long. By morning, he and another Marine were the only ones alive. So he carried his buddy back to the American base.

Given narcotics for his wounds, Ross struggled with drug addiction after the war. He described kicking his habit in “God Was In My Corner” in the November 1947 edition of Coronet magazine.

But on the runup to Christmas in 1942, he was preoccupied with a favor the priest had asked of him. Gehring played the violin and found a portable organ. Ross was the only one who could play it, so Gehring asked if he would play “Silent Night” on Christmas Eve.

Ross said the only problem was he didn’t know the tune. It wasn’t much heard in the West Side neighborhood where he grew up. So Marines hummed it for Ross until he could play it by ear.

At midnight Mass, the war momentarily seemed far away as Ross accompanied hundreds of Marines singing:

In the silence that followed, the priest asked Ross to do an encore. Perhaps something from his tradition?

He chose “My Yiddishe Mama,” which had been his boxing theme song and had been played as he shadowboxed and danced his way from a stadium’s dressing room to the ring.

It is about a Jew who terribly misses his or her mother. But the sentiment is universal. It is written in the mournful tones of a minor key that can move someone who doesn’t know a word of Yiddish.

And that is what happened on a jungle island, 76 Christmas Eves ago, as Ross recalled to columnist Jimmy Breslin:

“There was a Jewish kid playing an organ and singing in Yiddish about his mama and a Catholic priest standing next to him with a violin trying to help it sound nice, and all around there were guys who came from every religion and some of them didn’t even have one, but they were all crying and thinking about the same thing.”

When Ross translated the lyrics, many a GI must have pictured his own mother as she’d trotted alongside a troop train pulling out of a station in Wichita, Kansas, or maybe Escanaba, Michigan:

“I long to hold her hands once more as in days gone by and ask her to forgive me for things I did that made her cry.

How few were her pleasures, she never cared for fashion’s styles. Her jewels and treasures she found them in her baby’s smile.”

Some things are universal.