Do we really need a remake of ‘The Dirty Dozen?’

Looks like we're getting a "contemporized remake" of "The Dirty Dozen," whatever the hell that means. 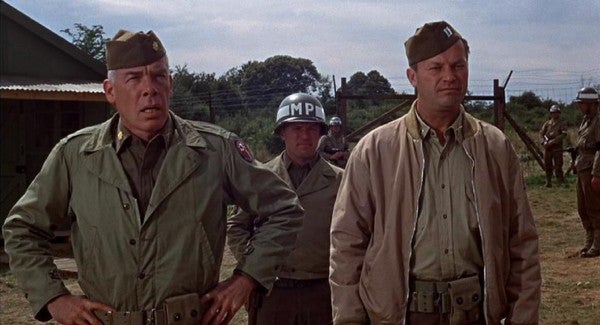 The Dirty Dozen might just be the perfect World War II movie. That doesn't mean it has anything to do with the reality of the war or the military justice system, but it's a war movie that does seem to get better every single time you see it.

Lee Marvin is an officer assigned to cobble together a unit that will kill Nazi officers before the D-Day invasion and must draw from a pool of military convicts facing life sentences or the death penalty. If the guys sign up for the suicide mission, they'll have their slate wiped clean if they succeed and return alive.

If you've never seen the movie (or if you just haven't watched it in the last week), it's streaming now on Netflix. Shut off the phones and the internet and enjoy the next 2.5 hours.

OK, so here's the thing: Warner Bros. has decided to enlist director David Ayer for a “contemporized remake.” What does that even mean? Will it be a Tarantino-style insertion of modern sensibilities into a WWII movie, along the lines of “Inglourious Basterds” or “The 14 Fists of McCluskey“?

Or will it be a truly contemporary tale? Does the modern military have a pool of death penalty prisoners to blackmail into a suicide mission? Who would be the enemy target? Can it even be a war movie if it's set in the present day?

The main reason for hope here is David Ayer, a writer and director who's shown a particular talent for writing about cops and the military. He directed Denzel Washington in “Training Day” and won him an Oscar (and also got Ethan Hawke a Best Supporting Actor nomination).

He wrote a pair of bent-cop classics in “Dark Blue” and “Street Kings” (and directed the latter). He made up for those by writing and directing “End of Watch,” one of the greatest good cop movies ever.

Things went off the rails a bit with “Suicide Squad,” which is pretty much a rip-off of The Dirty Dozen anyway. He recovered with the Netflix mutant cop thriller “Bright,” a great modern action picture.

So, if anyone just has to take another shot at a Dirty Dozen movie, Ayer would be the #1 guy on my list to try. No matter what, the movie he makes is guaranteed to be better than any of the three sequels to The Dirty Dozen made in the late '80s. If you've never seen them, please make sure you don't.