Want to know how to incite an armed uprising by a bunch of doomsday cultists in a rural Montana county,... 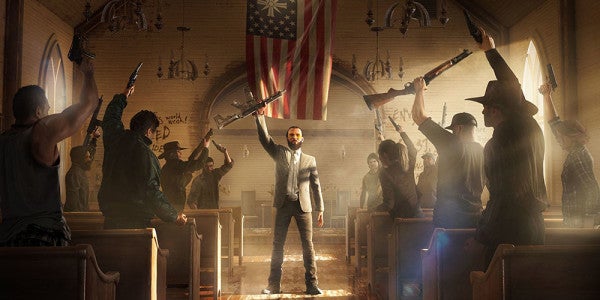 Want to know how to incite an armed uprising by a bunch of doomsday cultists in a rural Montana county, and possibly kick-off the apocalypse? Far Cry 5will show you.

Released March 27, Far Cry 5is the latest in a dozen games, spin-offs, and expansions in the open-world first-person-shooter franchise, and fortunately, Task & Purpose had a chance to “review” it on Xbox One, make a bunch of silly mistakes, and lose hours of sleep during work nights, so you don’t have to. (But you totally should.) Be warned though, the prices get steep, ranging from $51 to $90 depending on the platform and whether you splurge on the special editions.

The storyline feels like the fever dream of a liberal arts graduate who thinks everything West of New York and East of California is middle America, and is worried that we’re just one downed cell-tower away from an armed insurrection by hillbilly religious extremists. This game is everything I expect from 2018: it's violent, beautiful, funny, immersive, and overflowing with deep-seated fears and (mostly) self-aware caricatures.

Here’s the basic premise: You’re a rookie deputy in fictional Hope County, Montana, and you’re tasked with helping a federal marshall issue an arrest warrant for Joseph Seed, the leader of the Project at Eden's Gate, an armed cult led by Seed and his trio of equally batshit siblings: Faith, Jacob, and John. But this is less of a cult and more a fanatical army that’s taken over most of the area and is waiting for a reason to go to war. That’s where you come in. These loons have a prophecy that someone will come and try to take their leader, and that will signify that the world is coming to an end.

When you chopper into their fortified camp without back up and try to do just that, it sets off a shitstorm called “the reaping” — the forced introductionation of the county’s residents — that you’re stuck trying to sort out over the next several weeks, or however long it takes you to power through the game.

Far Cry 5 has a bit of a military vibe that goes beyond the surplus of camo, combat boots and 5.11 Tactical gear — there’s a decent cast of veteran characters. First there’s Grace, a sharpshooter and post-9/11 veteran from a military family. Grace joins your rag-tag resistance after you help her protect the tombstones of relatives killed in “the war” from a group of “peggies” — the game’s pejorative name for the followers of the Project at Eden’s Gate. There’s also Dutch, who is is probably a Vietnam vet based on the plaques and unit memorabilia in his doomsday prepper bunker. Not all of the ex-service members in the game are on your side though.

As a veteran… I think you should join this cult./Courtesy of Ubisoft.

Jacob Seed, the eldest brother of the family, is in charge of training the cult’s militia, which he does by “culling the herd” which really means he just up and kills weak or unwilling recruits. He’s a Gulf War vet, and wants to make sure you know it, just look at the dog tags, high and tight, operator beard, and the fatigues decked out with badges and an 82nd Airborne patch. After all, nothing says “thank me for my service,” like waging a war against the very country, and values, you fought to defend while in uniform.

Assuming you don’t read every note you come across in the game, the characters’ backstories — along with all those details that might make them relatable, or believable — are left vague. The result is that everything and everyone comes off as a caricature that’s just recognizable enough for a player to get the joke or the reference, but not so true-to-life that anyone is likely to actually take offense.

There’s the grouchy Hurk Drugman Sr. whose run for Senate, already hampered by those “Obama lovers,” he says, was utterly derailed by the cult uprising. The cultists, for their part, point to Washington as proof that the end is nigh, saying “just look who’s in charge.” And there’s the off-hand quips from NPCs about liberals “coming for our guns.” (Thankfully for you, nobody successfully disarmed Hope County. If they had, you’d be screwed.)

As far as the gameplay goes, Far Cry 5 is pretty standard for the franchise — it has a massive open world, where you have to liberate individual zones before finally taking on the cult’s leader, Joseph Seed. But that can sometimes feel like a grind, so my advice is to bounce between the different areas so you spend less time grinding side missions and more time in the story.

If rampaging around rural Montana is more your style, there’s some new toys, like WWII-era war planes, seaplanes tricked out with mini-guns, and attack helicopters bristling with ordnance. And of course, there are tons of customizable weapons; explosives; and perks to fit how you play, too. Wanna go in guns blazing and soak up enemy fire? Get the health buffs and extra weapon slots. If stealth is more your thing, splurge on suppressors and upgrade your ability to do cinematic (and unrealistic, but awesome) takedowns.

But you don’t always want to go at it alone, and you don’t have to. You can team up with characters that you recruit through the story. If you’re less of a people person, you can befriend animal companions, like a grizzly bear named Cheeseburger, a cougar called Peaches, and Boomer, the loveable dog who mangles your enemies and brings their discarded weapons back as trophies.

So, if you’re looking for a way to temporarily destroy your social life, Far Cry 5 is probably a good bet. Sure, it has a co-op mode, but let’s be honest, nobody comes to Hope County for the company. We came to watch the world end.

And thanks to those maniacs at Eden’s Gate, that’s probably what we’ll get.