Was invading Afghanistan and Iraq a good idea? Never much for public introspection, George W. Bush was always content to let history judge his presidency 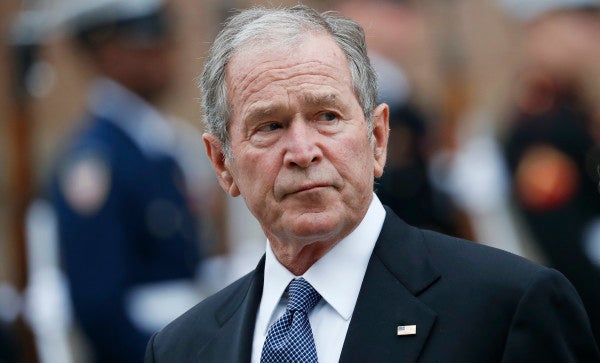 WASHINGTON – Never much for public introspection, George W. Bush – a history major at Yale – was always content to let history judge his presidency.

In real time, that judgment was harsh. He left office with unpopular conflicts still raging in Iraq and Afghanistan, the economy in freefall, and just 17% of Americans expecting him to go down in history as an above average president.

Was invading Iraq really a good idea, for instance, given that U.S. forces never found those weapons of mass destruction that Saddam Hussein supposedly had squirreled away?

“I’m not a regretter,” Bush said at the time, as Stephen Hadley, his second-term national security adviser, recalls in a new PBS documentary that debuts Monday night.

The latest installment in the American Experience Presidents Collection gives quarantine-weary Americans a chance to reminisce about an era bracketed by other momentous crises: the terrorist attacks of Sept. 11, 2001, and the financial meltdown of late 2008. The two-part, four-hour film airs in Dallas on KERA – part 1 on Monday at 8 p.m., part 2 on Tuesday at 8 p.m.

The judgment of history remains harsh.

The former Texas governor, heir to a leading political dynasty, is depicted as earnest but somewhat unprepared, stubbornly predisposed to war in order to prove U.S. resolve regardless of whether the justification was pretext or proven, and prone to manipulation by a vice president who could always bring out his inner cowboy, as a top aide for Bush’s less bellicose secretary of state, Colin Powell, puts it at one point.

“Woefully uneducated in foreign affairs, inclined to believe the worst about Saddam, Bush did nothing to prove the reliability of the CIA reporting,” the narrator intones.

Like a horror movie that gets the worst of it over in the early minutes, this one starts with the planes hitting the World Trade Center, the moment that defined the Bush presidency.

Memories flood back – the scene at a Sarasota elementary school as Bush learned of the attack, and at Ground Zero three days later atop a pile of rubble, one armed draped over the shoulders of a firefighter and he rallies first responders and the nation.

“I can hear you,” Bush says into his megaphone. “The rest of the world hears you. And the people who knocked these buildings down will hear all of us soon.”

This was Bush at his finest. And there are a handful of moments that will bring a sentimental smile, though Bush detractors will find far more material to reinforce their views.

After 9/11, Bush was determined to find a military target. The focus quickly settled on Afghanistan, where Osama bin Laden, the mastermind behind the attacks, was hiding.

At Camp David, the president and his team discussed options. Michael Morell –then the CIA’s briefer to the president and later, its acting director – recalled a senior State Department official urging Bush to set aside the march to war, instead trying to ramp up diplomatic pressure on the Taliban to find bin Laden.

“The president looked at us. And he said, `F— it, we’re going to war.’ The president’s mindset was: They did this. They have the capability to do this, and I have to make sure they don’t do it again. And the only way to do that is militarily,” Morell recounts, in one of the more startling moments in the film.

In his 2015 memoir, Morell offered a slightly more nuanced version. Bush, he wrote, seemed to be speaking “in the emotion of the moment” and “playing to his audience: his CIA briefer and a tough CIA operations officer. In fact, the United States did give the Taliban an opportunity to turn over Bin Ladin and his top lieutenants. The Taliban refused.”

Some of the most memorable moments in the documentary illuminate the tension between Bush the warm human being and Bush the tough-talking wartime leader.

Perino recounts Bush’s encounter at a military hospital with the parents of a wounded serviceman.

“Their son was not going to make it. He was on life support,” she recalls. The mom “railed at the president, and he didn’t try to leave.” Aboard Marine One for the flight back to the White House, “He said, `That mama sure was mad at me.’ And I said yes, sir. And he looked out the window, and I saw this one tear came down his cheek, and he said `I don’t blame her a bit.’ And we got back to the White House and it was back to business.”

The film covers a familiar narrative: Bush’s upbringing as the son of a war hero and future president. A somewhat aimless young man who struggles in the oil business, quits drinking at age 40, buys the Texas Rangers baseball team and manages to ascend faster and higher in politics than brother Jeb, the one their parents’ hopes had rested on.

The filmmakers rely heavily on historians, biographers and journalists to move the story along, among them some of Texas’ best from that era: Wayne Slater, the longtime Austin Bureau Chief of The Dallas Morning News, R.G. Ratcliffe, a Houston Chronicle veteran, and Bush biographer Bill Minutaglio, another News alumnus.

The 9/11 attacks assured that.

Before the invasion of Iraq in March 2003, Vice President Dick Cheney insisted that the U.S. military would be greeted as liberators. Powell was skeptical, and so was George H.W. Bush, who had been careful not to meddle. But in August 2002, the former president sent an unmistakable signal of disapproval: an op-ed by his own national security adviser, Brent Scowcroft – practically a member of the family – in the Wall St. Journal chiding the younger Bush for moving too eagerly toward war in the Middle East.

“Bush had always been caught between wanting to please his father and wanting to prove his independence. Now, he ignored his father’s advice and plowed ahead towards war,” the narrator explains.

Images from the Bush era are some of the most memorable in modern presidential history, and the film makes good use of those:

Saddam’s statue toppling in Baghdad. Celebrations in the streets. IED blasts. Bush, a pilot in the Texas National Guard, landing on the USS Lincoln off San Diego, a huge “Mission Accomplished” banner hanging behind him as he declared that “Major combat operations in Iraq have ended.”

Bush was very excited about that, Card recalls: “He was going to fly on a plane and land on a carrier.”

But Iraq was weeks away from falling into chaos, and combat would continue for years.

“That was probably naïve” to think that new Iraqi leaders would emerge to secure the peace, Card avers, in the biggest understatement of this film.

Viewers will get ample reminders of other lowlights: Prisoners at Abu Ghraib naked and hooded, forced to stand on boxes. Bush peering out the window of Air Force One over a New Orleans inundated after Hurricane Katrina in August 2005 and then, days later, telling FEMA director Michael Brown: “Brownie, you’re doing a heck of a job.”

“It was one of the few times where his unbelievable political instincts let them down,” says Bush communications director Dan Bartlett. “Those iconic images that cut against us – the `Mission Accomplished’ [banner], the looking out of the aircraft – those are searing.”

On the positive side of history’s ledger, the film briefly covers PEPFAR, the initiative Bush launched to combat HIV globally. Over $90 billion in aid has been delivered, mostly in Africa. Eugene Robinson, the liberal Washington Post columnist who at one point in the film criticizes Bush for authorizing torture, also offers the most glowing tribute: “Not a lot of presidents can say credibly that a decision saved millions of lives. That one did.”

At his final news conference, Bush indulged a question about the mistakes he’d made.

“Clearly, putting `Mission Accomplished’ on an aircraft carrier was a mistake,” he conceded. Other turning points he viewed as disappointments rather than mistakes: the handling of Katrina, the failure to find any weapons of mass destruction.

Bolten recounted Bush’s last moments in the Oval Office as president, heading to Barack Obama’s inauguration. He put on his overcoat and said that serving the nation had been a privilege.

“I watched him leave, and I noticed he didn’t look back.”