Confessions Of A Tank Commander 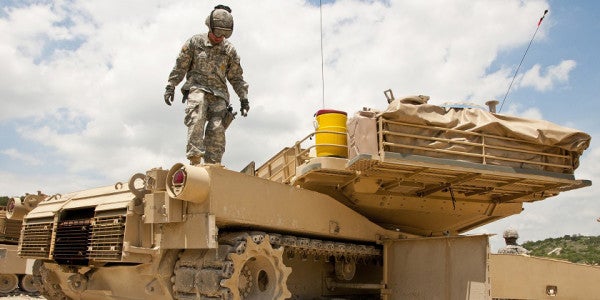 World War II was arguably the heyday of tank warfare; however, tankers have continued to serve on the frontlines in the Global War on Terror, particularly during the early years of the Iraq War.

While infantry provides the boots on the ground for combat operations, armor, and in particular, tanks, bring the muscle.

In addition to the main gun, which is a devastating cannon that can level a city block with ease, the M1 Abrams boasts a host of other weapons, including a coaxial machine gun, the loader’s machine gun, and the tank commander’s .50-cal.

The Army’s M1 Abrams is typically crewed by four men: the driver, the gunner, the ammunition loader, and a tank commander. Because of the confined quarters of a tank, its crews are notoriously tight knit, and like any unit that spends endless hours together in a small space, they develop their own unit rituals, traditions, and have unique outlets for dealing with the day-to-day stressors of military life.

In 2006, while deployed to Forward Operating Base Rustamiyah, east of Baghdad, Iraq, Army Capt. Aaron Doft was in charge of 15 other soldiers and four M1A2 SEP tanks — SEP meaning systems enhancement package.

Task & Purpose spoke with Doft about what it’s like to have the awesome power of a tank at your fingertips and what exactly goes on inside while you’re out on a mission.

What was the day-to-day life like for you guys as tankers, and how much time did you spend in the tanks?

Our daily missions varied fairly broadly. We had missions that were as short as four hours, where we’d leave the base and spend four hours in the tank, asserting our presence, or dissuading the enemy from performing any actions that would be harmful to American men or allied forces present. So that was the short end, which is four hours on patrol.

The longest mission we had where we were in the tanks for the duration of the mission was 36 hours.

For that particular mission, it was a battalion-wide operation. So we had heavy infantry, light infantry, and we had tankers as well as ordnance disposal, working dogs, female engagement teams — it was the full spectrum of operations for this particular mission. But, the tanks for our part were on security.

A 36-hour mission does make bodily functions, and the difficulties they provide, really come into play. In these cases, we definitely carried more than enough, or I’ll say enough water and electrolyte drinks, and whenever we had to relieve ourselves we would of course use the empty containers for micturation and sometimes, MRE bags for defecation.

Yeah. Not to just focus on that, but I’ve got to ask: How do you guys keep cool and maintain the right attitude if some guy has to take a dump in an enclosed container with three other guys? Is it a point of humor, do you laugh it off?

It is. Whenever the actual defecation part came into play, it was a source of humor. Lots of jokes at the perpetrator’s expense. Usually involving comments about what he had eaten earlier that day, or the texture, perhaps of MREs, and the product, should we say.

What made it worse was inside the tank: The temperature inside the tank really really exacerbated the smell and increased the pressure. Because, I found out inside the tank, thermometers, the digital type, stop at 150 degrees.

So imagine being in, as you said, an enclosed container with three other guys, at 150 degrees with bags of poop.

I don’t know if I want to, that sounds horrible, man.

Yeah, that was a good time.

Do you ever get irritated with the fact that you're stuck in a tiny space with three other guys? How do you keep the right attitude?

I mean, that’s the real question, isn’t it?

Any time you’re living in close quarters with other people, other people with different personalities, from different parts of the country, some people from outside the country … everyone comes with their own experience, their own personality, and you just learn how to communicate to best amplify cooperation and reduce conflict. This is a way that a person can be an effective leader, but it’s also a primary way that people just get along in general.

Were you ever in direct combat operations as a tank commander?

Yes, we were in direct contact for more days than we were not. We would take pot shots and snipers, I’d say several times a week. I’m only going to talk about while we were out conducting operations, not while we were sitting on the Forward Operating Base — on the FOB we received indirect fire almost constantly — but outside the wire we were engaged with small arms fire, usually disorganized, no large-scale ambushes, usually. Just individuals engaging us. There were several engagements during which we received fire, and one incident I remember pretty well, because the RPG passed me by about three feet when I was standing next to my vehicle. So that was exciting.

So yeah, small-arms fire, RPGs, roadside bombs, and all of these things were pretty common.

How about during training and work-ups, can you tell me a bit about firing the main gun from inside the tank?

Being inside the tank when the main gun fires: It’s beautiful. The adrenaline just takes over and fills your entire bloodstream because what you’re dealing with is an explosion less than two feet away from you that is sufficiently powerful to rock a 72-ton vehicle and if we didn’t have our sprockets engaged, so the breaks on, firing a main gun will propel the tank backward.

Just knowing that kind of power is at your fingertips, knowing that kind of power is exploding within two feet of your face, I mean my blood is going just thinking about it. It’s a beautiful experience. It’s something I’ll cherish. I’ll take it with me everywhere I go for the rest of my life, just knowing I was able to participate in such an activity.

There is another couple of related experiences. One is being the tank commander, and sometimes you have your head outside the hatch when the main gun goes off. The shock wave from the main gun when it goes over you and expands out in that spherical pattern, rattles your teeth. It blows all of the hair on your face back. I wore a mustache, I always wore a mustache, so it would blow my mustache back and flatten down my eyebrows. That’s another beautiful thing.

And again, standing outside of the tank, the concussion will almost knock you over. It will certainly knock the wind out of you. There is just so much power involved in propelling these projectiles.

Well there are a couple of things that only tankers can do, say, for instance when the new platoon leader or the new company commander arrives and you’re going to the tank range to do the qualification of the main gun. They’ll take the cover of that freshly arrived officer and they’ll put it in the main gun of the tank, then they’ll load the main gun round. So when the tank commander says, “Fire,” the tank commander fires his own cover downrange.

Now, the cover doesn’t go downrange because it’s vaporized in the gun tube, but it’s fun to say, “He sent his own cover downrange.”

Another one is, also for new arrivals, usually for the lower-enlisted — unless officers and senior NCOs really feel like being a part of the unit and endearing themselves to the men — when they arrive, they’re accosted and duct-taped to the main gun tube, which is then elevated and the tank turret is spun around until the new arrival vomits, or starts giggling too much for anybody else to have fun.

Did you ever participate?

Absolutely. Of course. It’s part of the culture, really. It’s a unique ability. It’s a unique set of abilities that tankers have. The infantry, they get to wear their blue chords on their dress uniform, they get their Combat Infantry Badges. Tankers, we get to have fun.