"How's anyone gonna see my war face if I'm wearing a mask?" 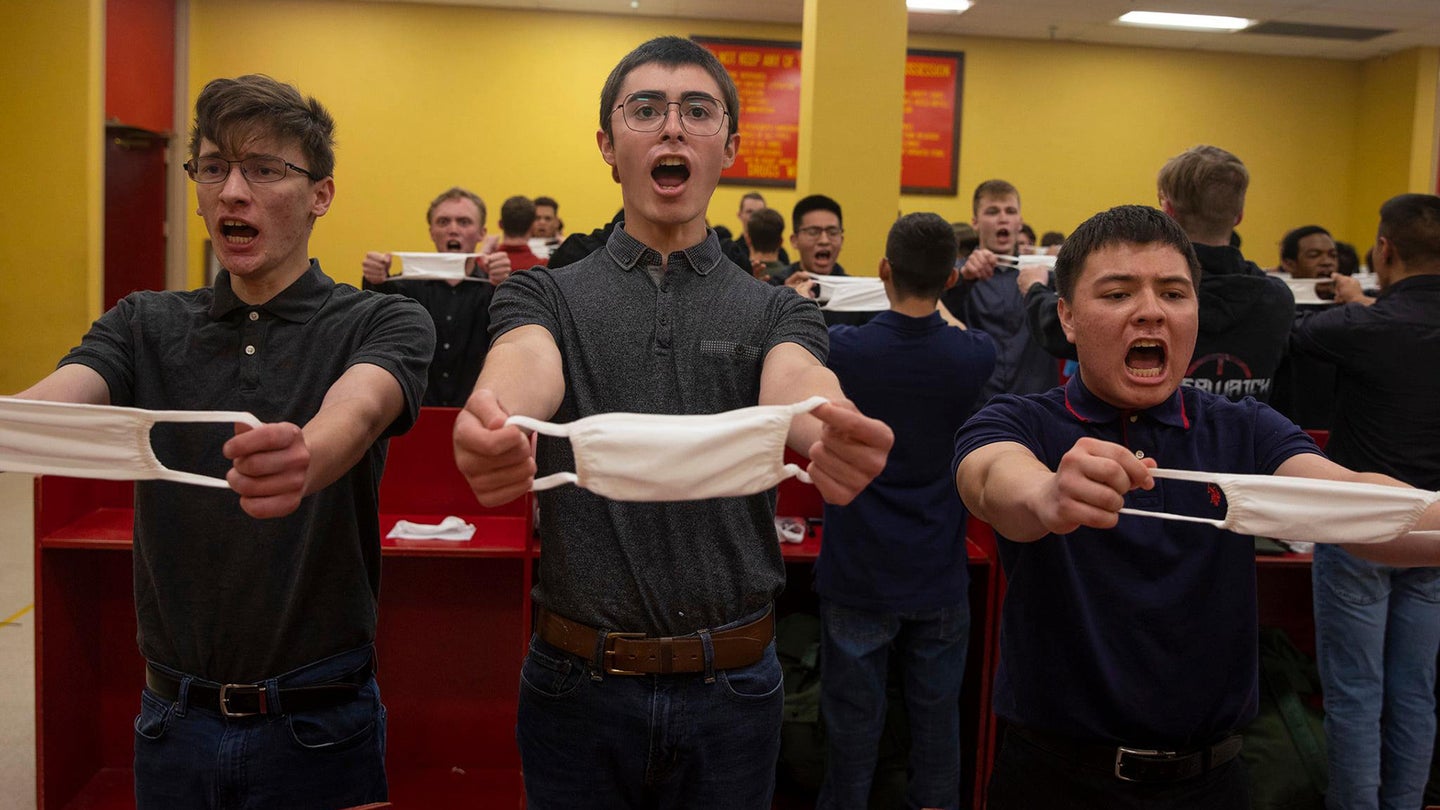 A recent photo from Marine Corps Recruit Depot San Diego, California has me at a loss for words. Well, almost.

The image, which was published to the military’s online media database, shows three would-be Marines at receiving — the first portion of recruit training when it feels like you’re getting yelled at a lot, but is in fact only a taste of what’s to come. During receiving recruits file paperwork, get a fresh new haircut, file more paperwork, get issued the clothes they’ll wear for the next several months, and learn the basic rules of life during Marine Corps boot camp: You must refer to yourself in the third person, always speak at maximum volume, and end every sentence with “sir” or “ma’am.”

The photo by Sgt. Brooke C. Woods shows recruits with Fox Company, 2nd Recruit Training Battalion, on May 11, 2021 with their arms outstretched holding face masks. According to the photo caption, the not-even-first-phase recruits (there are four phases to recruit training, not counting receiving) were being “informed of the articles under the Uniform Code of Military Justice, which they are required to follow during recruit training, and as Marines.”

Because I recognize those red booths in the photo, and since the recruits are still wearing normal clothes and have shaggy hair, I’m going to say with relative certainty that they only just stepped off the yellow footprints and that this is their first day at boot camp — welcome to recruit training, fellas, you’re gonna love it there! There’s also a very good chance that these recruits are being instructed, by the numbers, how to properly wear a mask during the ongoing novel coronavirus (COVID-19) pandemic.

During recruit training, every single thing you’re told to do — no matter how small — gets turned into a precision drill movement. Gonna shave your face? Not so fast, your drill instructor has to walk you through the proper way to do that. Gonna clean your nasty body? First, you need to be taught which parts to clean and how to properly use soap. (I’m serious, one of our drill instructors in recruit training felt the need to explain how soap works and that it should be applied to areas of the body that are dirty or smelly and that you should wash your nether regions.) Are you about to get dressed? They’re going to time you, and you’ll be expected to put on your clothes in a specific order. It stands to reason that how to properly wear a face mask, especially during a global pandemic, would be explained in as much detail as all those other things.

Given that the original photo caption doesn’t give us a lot to go on, let’s have a little fun with it, shall we? It’s time for some creative commentary, and that means a caption contest. Here, I’ll go first:

I’m sure you all can do better. So, hop on into the comments and throw out some suggested captions.