A man sneaked into the back of a beer truck behind a liquor store in downtown Minneapolis, intent on stealing... 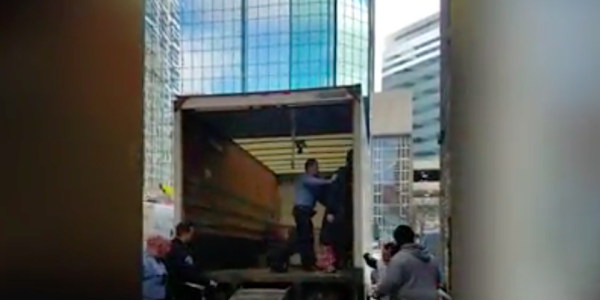 A man sneaked into the back of a beer truck behind a liquor store in downtown Minneapolis, intent on stealing some of the inventory, but the driver thwarted the thirsty thief and locked the interloper inside until police arrived, authorities said Thursday.

Mark D. Erickson, 47, was arrested and jailed Wednesday on a misdemeanor charge of tampering with a motor vehicle.

Erickson climbed into the back of the delivery truck, only to find himself incarcerated by the quick-thinking driver, Farrell said.

“The driver was walking up the ramp” on the back of the truck and was startled to see a much bigger man inside, Farrell said. “[The driver] jumped down, locked the door and called the police.”

Related: ‘Do Not Mess With Old Lady Veterans,’ Says Woman After Kicking A Carjacker’s Ass »

Farrell said it was maybe 5 minutes, and police were there to make the arrest and have Erickson again locked up — this time in the Hennepin County jail.

“Liquid courage” is how Farrell described the man’s gumption. “If it were me, I would have sat down and had me a cold one.”

Farrell said the man had been a regular customer, but now is “in our book of shame” and no longer welcome at Haskell’s.