Forget Hallmark: This is the best military-themed Christmas movie ever made

It's a movie families have gathered around for decades, often oblivious to its deeper themes of war and sacrifice. 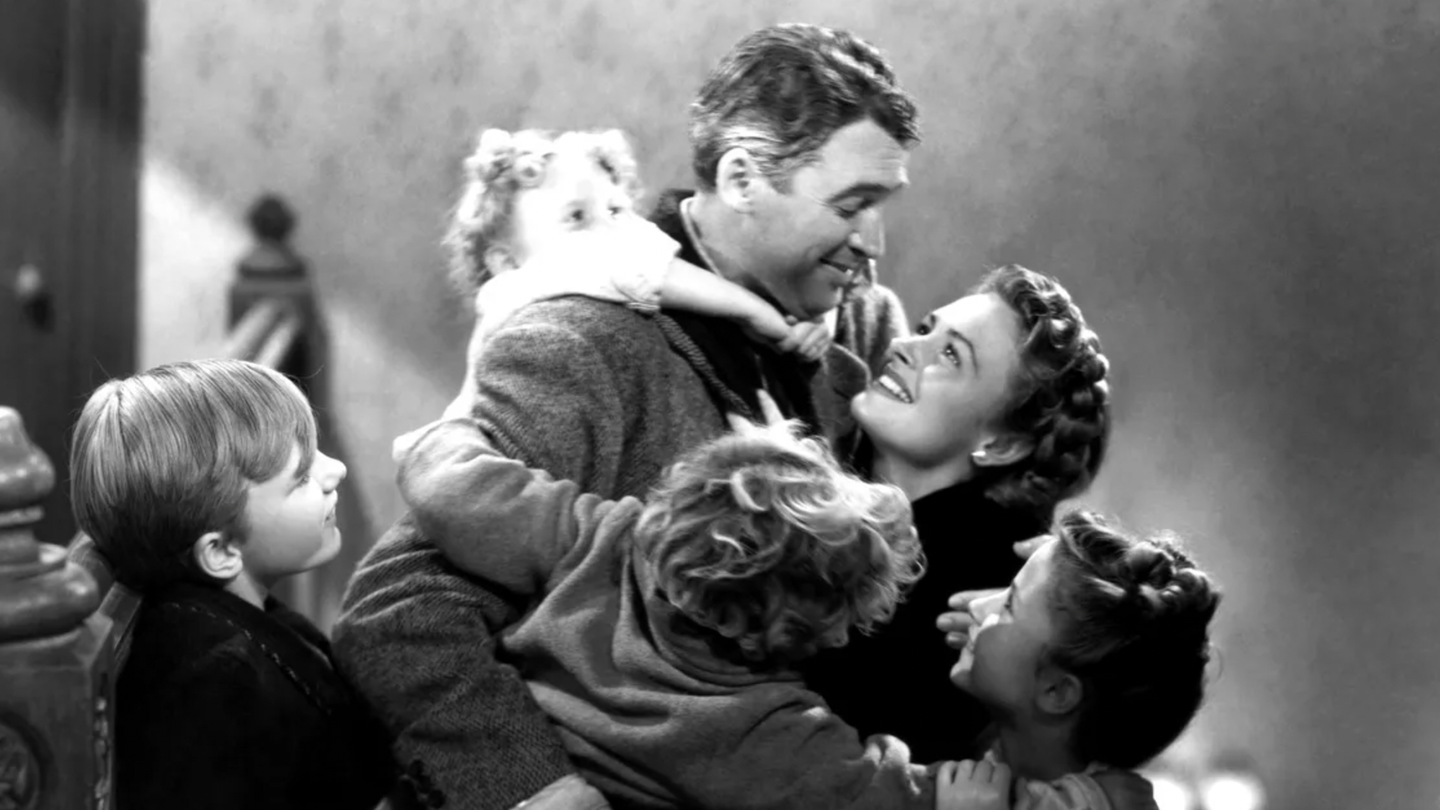 A scene from 'It's a Wonderful Life' (Paramount Pictures).
SHARE

When Hallmark and Netflix back up their annual dump truck of aggressively themed Christmas romance flicks, military-themed goodies occasionally dot the pile. Operation Christmas Drop (Netflix, 2020) features a meet-cute involving a real-life humanitarian outreach op in the Pacific; in USS Christmas (Hallmark, 2020) sparks fly on a Navy tiger cruise out of Norfolk, Virginia.

These films are perfectly acceptable December fare, and, more importantly, a nod to the experiences of Americans in military communities. But if you’ve got to choose just one movie to watch this holiday season, save your time. The best of the breed is a movie families have been gathering around for decades, often oblivious to its deeper themes of war and sacrifice.

Setting the foundations for a wonderful life

I grew up watching this black-and-white Frank Capra classic. As a child, I felt unsettled by protagonist George Bailey’s emotional volatility; I rolled my eyes at the corny slapstick of Clarence the wingless angel; and I hated the lack of satisfying comeuppance for villain Henry Potter. However, the movie always won me back with its triumphant, emotional conclusion.

I didn’t know, until years later, that Capra and Jimmy Stewart, who played Bailey, were both freshly returned from service in World War II when they made the film. It’s a Wonderful Life was released in 1946, just a year after V-J Day, to an American public as much in recovery from the horrors of the war as the residents of the fictional town of Bedford Falls – where the movie takes place – were.

If you haven’t seen the movie, here’s your 76-year-old spoiler alert!

Bailey is a bright, ambitious kid growing up in Bedford Falls, somewhere in upstate New York. He’s desperate to get out of his small town and see the world, but his sense of duty and selfless nature keep thwarting his dreams. When his father dies unexpectedly on the night of his high school graduation, he puts off college to save the family Building and Loan business from the clutches of Potter (Lionel Barrymore). Saving the Building and Loan – and by extension, the town, from the predation of slumlord Potter – continues to cost Bailey: he gives up a planned trip to Europe and even his honeymoon to avert various crises. Meanwhile, his younger brother Harry seems to get everything that Bailey dreamed of: college, travel, career.

Bailey saved Harry from drowning in a frozen pond when the two were preteens, losing his hearing in one ear as a result. He remains steadfastly loyal to his younger brother. Even in moments of frustrated anger at his unrealized dreams, he never betrays any grudge against Harry.

The two boys were small during World War I, known then as the Great War, or the War to End All Wars. They grew to adulthood in peacetime, amid a new era of American optimism. How did the Great War affect the town? Did Bailey’s father serve? Is Potter in a wheelchair because of wounds sustained in combat? We’re never told. It’s apparent, though, that war isn’t on the mind of any of the bright-eyed graduates of Bedford Falls High class of 1928.

But war does come to town when George is in his 30s, and provides the major turn that sets up the film’s crisis and resolution. In a fast-paced montage, we observe how nearly every major character in the film becomes a contributor to the fight for victory in World War II.

Potter becomes head of the draft board. In a scene that must have turned the stomachs of early viewers, he processes a stack of files, droning “1A … 1A … 1A …” That 1A draft classification means the men those files represent will certainly be conscripted and likely sent to war; their fate is sealed. As always, Potter is heartless and loses no opportunity to take advantage of the poor, who, as was always true with the military draft, had the least recourse against being involuntarily sent off to fight for their country.

Later in the movie, Bert, the friendly local police officer, is seen in military uniform, carrying a rifle with a fixed bayonet. A voiceover tells us he was wounded in North Africa and received the Silver Star. We don’t know exactly where Bert served, but the U.S. supported the war’s North Africa campaign in 1942 and 1943.

The movie’s Italian-born director Frank Capra, who had commissioned in the Army after college and earned his U.S. citizenship through service, was intimately familiar with the North Africa campaign. He had voluntarily left Hollywood to serve again in the U.S. Army Signal Corps when America entered World War II. He directed the acclaimed Why We Fight series of military propaganda films while in uniform and also directed Tunisian Victory, which focused on the planning and execution of Operation Torch, the successful Allied invasion of French North Africa, and the following liberation of Tunis from Axis powers.

Ernie, the town cab driver, we learned, parachuted into France. Perhaps he was part of the U.S. Army airborne assault on Normandy in June 1944 known as Operation Overlord. We’re not told anything about his experience there, except that he returned – unlike the thousand troops killed and nearly 5,000 missing after the operation. (Side note: Ernie shows up incorrectly dressed in a service uniform with Air Force chevrons at the end of the film. Oops.)

Marty Hatch, Mary Bailey’s brother, was part of the Allied invasion of Germany. We’re told he “helped capture the Remagen Bridge.” The Ludendorff Bridge, crossing the Rhine at the town of Remagen, was taken by U.S. forces in an 18-day battle in March 1945. The bridge, which was taken intact, turned out to be a major asset for the Americans, who quickly expanded the position and held it against incessant German attempts to destroy it from the air and land.

Jimmy Stewart was a real-life hero flyboy: In 1943, at his request, he was deployed to England to pilot a B-24 Liberator. He’d earn the Distinguished Flying Cross, the Air Medal with three oak leaf clusters, and the French Croix de Guerre with palm. By the time he starred in It’s a Wonderful Life, he was a full-bird colonel with 20 combat missions under his belt. But in the movie, his character, George Bailey, is once again kept from his chance at seeing the world. Because of his deaf ear, he’s classified 4F: unfit for military service. Instead, he gets thankless homefront jobs: air raid warden, leader of paper drives and scrap drives. We learn later that he keeps his 4F card in his wallet at all times, even after the war has ended.

By contrast, Harry Bailey gets all the hero accolades in It’s a Wonderful Life. We’re told he served as a Navy pilot and became a standout ace, shooting down 15 enemy planes, two of them as they were about to crash into a transport full of U.S. soldiers – a reference to the Japanese kamikaze jets that claimed the lives of more than 7,000 Allied naval personnel in suicide attacks.

Harry is awarded the Medal of Honor, and Bedford Falls is abuzz. On the final day depicted in the film, he’s headed home to receive a hero’s welcome. Splashed across the front of the local paper is a (cleverly doctored) photo of Harry getting honored by President Harry Truman, and the hapless Uncle Billy can’t help rubbing the news in Potter’s face. Tragically, though, he leaves an envelope with $8,000 in Building and Loan cash tucked inside the newspaper he hands to Potter – more than $122,000 in today’s dollars – and Potter sees an opportunity to destroy the business and Bailey in one fell swoop.

When the money’s discovered missing, Bailey rapidly spirals into crisis. He knows he faces prison and ruination; he looks at his $500 life insurance policy and considers suicide, believing he is, in Potter’s words, “worth more dead than alive.”

That’s when Clarence the comical angel shows up, and in a series of visits to the past and present reminiscent of A Christmas Carol, shows Bailey how much worse his little world would be if he’d never lived.

The war influenced Stewart and his performances

While Jimmy Stewart’s performance throughout the film has a raw, emotional edge he’s given two brief flashes of demonstrative anger that seem jarring and out of step with his gentle nature. He weeps bitterly and prays at Martini’s pub as he considers ending it all; he weeps again when begging God to give him a second chance and “let [him] live again.” And it’s at these two points when he’s at his most vulnerable in the film.

Stewart would acknowledge, decades later, that the tears were real.

“As I said those words, I felt the loneliness, the hopelessness of people who had nowhere to turn, and my eyes filled with tears. I broke down sobbing,” he told Guideposts in 1987.

Stewart was no longer just the Hollywood leading man, freshly burnished with an Academy Award, that he’d been when he left for war. He was visibly older than the years he’d aged, and, according to his biographer Robert Matzen, betrayed a number of the classic symptoms of what we now call post-traumatic stress. As Matzen told CNN in a definitive piece on how the war changed Stewart, he was prone to mood swings and bursts of temper not unlike Bailey’s, as well as shakes and nightmares.

His acting changed, too: it was deeper, more emotional.

“It’s a Wonderful Life was a result of Jim’s war experiences because it unlocked this depth of soul in Jimmy … He had to learn to act again and that’s what you’re seeing on screen. It’s like lightning that just got captured in a bottle,” Matzen told CNN.

Capra and Stewart both entered new creative eras upon return from the war.

It’s a Wonderful Life was a box-office flop that only became beloved Americana years later, and Capra felt himself increasingly out of step with an audience that wanted to leave the darkness of World War II and the Great Depression behind. He formally retired in 1951 and began making documentaries.

Stewart, who transferred to the new U.S. Air Force Reserve in 1947 and would rise to the rank of brigadier general, pursued darker projects, including a number of thrillers directed by Alfred Hitchcock.

The movie continues to resonate with new generations of viewers because it gazes upon a deeply familiar kind of despair borne of disappointment, frustrated hopes, and helplessness in the face of evil circumstances. In the CNN story, Metzen said that Stewart was plagued by thoughts of the troops under his command whom he hadn’t been able to save.

And yet, we’re reminded that love can overpower this despair.

As Clarence Oddbody tells Bailey in his farewell message, “No man is a failure who has friends.”