John McCain Wanted To See One Specific Part Of The New Documentary Series, ‘The Vietnam War’ 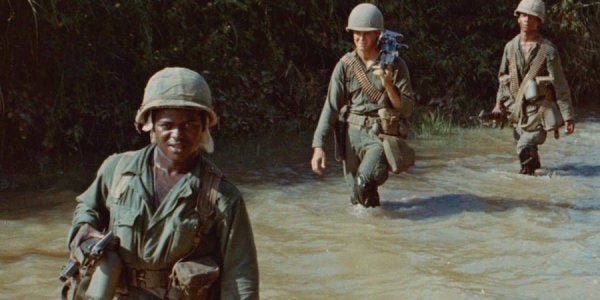 Ken Burns and Lynn Novick's new 18-hour documentary series, “The Vietnam War,” premieres Sunday on PBS, and it feels as searingly immediate as it is soaked in history.

Burns rejects the notion that history repeats itself, but at a Bank of America preview screening of the doc in New York on Thursday, Burns said he does notice “historical rhymes” in his work.

“I'm hearing a lot of rhymes today,” Burns continued: a public divided, a president convinced the media is lying, the “rancor” that fills the country — a word Burns used twice.

And while there are lessons to be learned from “Vietnam” about the horrors of war and its lasting effects, the main project Burns and Novick took on was telling the “many truths” of the war. That means interviews, and archival footage, from all sides of the conflict.

Though you may have seen some of the footage in “Vietnam” before, it's still stunning, especially when placed alongside personal recollections. During the war, journalists had a striking level of access and intimacy with soldiers — and they paid the price. Over 200 journalists and photographers were killed in Vietnam, Novick said.

For “Vietnam,” the quality of the archival footage means a truly cinematic feel, and less classic “Ken Burns” tricks to make still photos seem alive. But it's not just the footage, but rather the individual perspectives that will stick with you, especially those of Vietnamese people on both sides.

Phan Quang Tue, a retired immigration judge who came to the US in 1975 (and appeared in the doc), said at the screening he felt “Vietnam” was a non-partisan documentary, and that viewers should approach it as such.

One such viewer is Senator John McCain, whose wartime experience is the stuff of legends. “McCain just wanted to see the North Vietnamese stories,” Burns said Thursday. “Show me their story,” McCain instructed Burns when being shown parts of the documentary.

“Our species is bad at learning from events,” Burns said. But if you want to get the most out of this new documentary, you should take the McCain approach, and listen to all the perspectives on this defining and painful chapter in US history.

“The Vietnam War” premieres Sunday, September 17 on PBS at 8 pm. You can also watch it using the PBS app.