Wayne Williams promised his father they would be together when the Chicago Cubs won the World Series. He made good... 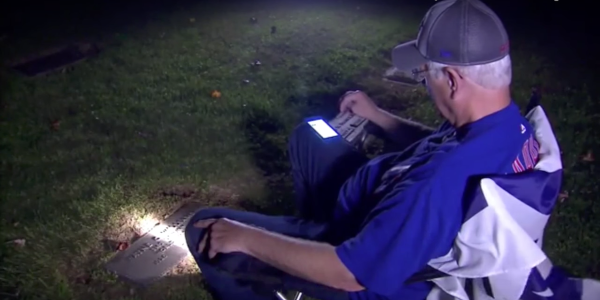 Wayne Williams promised his father they would be together when the Chicago Cubs won the World Series. He made good on the pact Wednesday, driving more than 650 miles to his father’s gravesite to listen to the game.

Williams, 68, a lifelong Cubs fan, grew up in the Chicago area but moved to Wake County about five years ago to be near his daughter.

He left early Wednesday to head to Greenwood, Ind., where his father, Wayne Williams Sr., is buried. Once he arrived at the cemetery’s open gates, Williams pulled up the game on his smartphone and sat in a chair next to his father’s grave.

“My dad and I had kind of made a pact that when — not if — the Cubs made the World Series, we would watch the games together,” Williams said.

When he arrived at the cemetery, Williams said, he was greeted by a news crew from WTHR, an NBC affiliate in Indianapolis. The crew had been tipped off by one of Williams’ relatives and sat with him in the dark cemetery listening to the game, which stretched into 10 innings and had a short rain delay.

The Cubs won an 8-7 thriller, breaking a 108-year streak without a World Series championship.

Williams said his father, who died of cancer in 1980 at age 53, would have been overjoyed but not surprised at the victory.

The elder Williams was always confident his team would someday be world champions. Even when the Cubs were terrible, he always looked on the bright side.

He was known to say, “This is going to be our year; we’re going to be .500,” Williams said of his father’s predictions of a break-even season. “Just being .500 was something for him.”

The family patriarch was a World War II U.S. Navy veteran, who believed there was nothing he couldn’t do.

Williams said his father used to say that he chose the Navy over the Army, because he believed that if his boat sank, he could just swim to shore — even if he was in the middle of the Atlantic Ocean.

“He was always unrealistic in some of his thinking. Hence a Cub fan,” Williams said.

Williams Sr. wasn’t good at taking care of himself, his son said, and would always fight through illness if he got sick.

Once on a visit to his home, Williams noticed that his dad had lost weight and recommended he go to a doctor, who discovered advanced cancer in his kidneys.

“They gave him three months,” Williams said. “He got six, but he spent the last month in a hospital bed.”

The elder Williams was buried in Greenwood alongside many of his family members, Williams said.

The younger Williams’ mother, now 91, lives with one of Williams’ brothers in northern Minnesota.

Williams said he planned to call her Thursday evening to tell her about his adventure, but expects her to be a bit underwhelmed by his crazy love of the Cubs.

“She’s very unsentimental, and she’ll say something like, ‘You’re an idiot,’ ” he said.

The family’s love for baseball stretches back to Williams’ grandfather, who was a huge fan of the Giants baseball team when it played in New York, he said.

Both he and his father share the middle name ‘Christie,’ an homage to Giants pitcher Christy Mathewson.

“It was supposed to be ‘-ty,’ but at the hospital they messed it up,” Williams said.

When Williams was young, he attended many Cubs games, recording box scores and paying close attention to each play, he said.

In his youth, the team struggled to win games and tickets were easy to come by. Visitors could simply walk up to the box office at Wrigley Field on game day and buy a seat anywhere in the stadium.

“They would say, ‘Pick any seat you want, they’re all open,’ ” Williams said.

The team has performed better in recent years and Williams said he’s been to fewer games, because he lives far away and tickets are harder to come by.

Williams said he believes this year’s crown will be the first of many World Series wins for the club, which is stacked with young talent.

“I really believe — of course now I’m channeling my dad — I think it’s going to be a dynasty,” he said.