In McGregor Vs Mayweather Fight, Here’s Who Has The Edge, According To An Expert 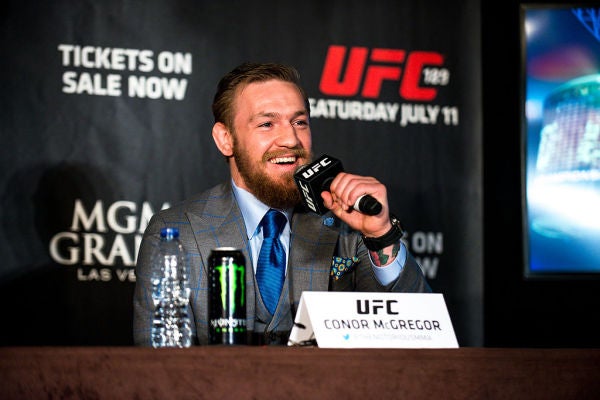 Though the two are yet to agree a fight, Rogan believes the mind games can begin with McGregor reminding Mayweather that he is unlike any opponent the boxer has ever faced.

Mayweather is well-used to defeating fellow boxers but he has never shared the ring with somebody who can land a wheel kick at will.

“One of the things that makes this fight interesting is that we've never seen Floyd box someone like McGregor and we've never seen McGregor box,” fight commentator Rogan, 49, explained on the popular Joe Rogan Experience podcast.

“Coming from a two-division champion in the UFC will help McGregor's confidence,” Rogan added. “He'll be scary.”

Considered the greatest defensive boxer since Pernell Whitaker, Mayweather has outclassed every single one of the opponents he has faced in his professional career.

Though consensus dictates that McGregor would also lose to Mayweather in a boxing ring, he would have the best of Mayweather if they fought in a cage.

Rogan explained: “Nobody has been able to say to Floyd that he could f**k him up. At any moment, if Conor wanted to, he could slide back and kick his face or kick his legs. Floyd wouldn't know what to do. You think Mayweather knows how to block a wheel kick?

“The difference between punching and kicking is sizable and McGregor closes that difference in a spectacular way. He's very unpredictable.

“In a boxing match, the odds are going to obviously favor Mayweather but in a fight, 100 million to 1, McGregor would f**k him up!”