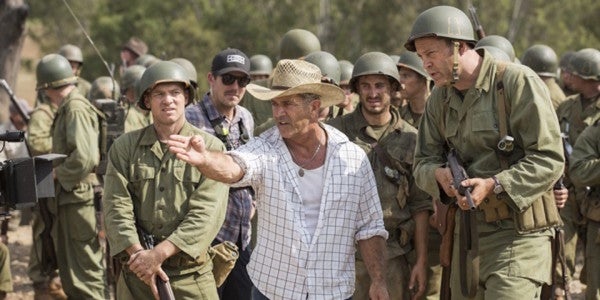 In Mel Gibson’s World War II drama “Hacksaw Ridge,” Andrew Garfield plays Desmond T. Doss, an aw-shucks country boy from Virginia who enlisted in the Army in 1942, fought in the Battle of Okinawa, saved the lives of 75 men and won the Medal of Honor.

Doss did all this without firing a single shot or even carrying a gun: A combat medic, he served as a conscientious objector due to his religious beliefs. Although he’s been the subject of books and documentaries, Doss remains a little-known figure in American history — at least until now. Gibson spoke briefly to The Herald via telephone about directing his first movie since 2006’s “Apocalypto.”

The most amazing thing about “Hacksaw Ridge” is that it’s a true story. Did you know about Desmond T. Doss before you started working on the film?

I had never heard of him, which is why I was so intrigued when the material came my way. People had been trying since the 1940s to get the life rights to this man. They realized he was grist for their cinematic mill and wanted to glorify him as a hero. But he didn’t want any part of that. He was a very humble guy and just wanted to grow vegetables and stay in his toolshed. The story is undeniable. It’s kind of astounding. It’s the pinnacle of heroism as far as I’m concerned. He exercised the highest virtues in the midst of a hellish situation.

The battle scenes look gigantic, even bigger than the ones you directed in “Braveheart.”

This is actually an independent film. The total budget was about 70 percent of what “Braveheart” was 20 years ago, and the schedule was half as long. We’re in a different landscape now as far as filmmaking goes. If you’re not making a film about a guy who wears spandex, you don’t get a big budget. You’re relegated to the world of independent film if you want to make a story that means something. It’s not like we were starving to death: A 59-day schedule and 40 million bucks is hefty. But those battles are big. That was the big ask. And the degree of difficulty goes up when you throw in incendiary devices like grenades.

The movie can literally be split into two parts. The first half is old-fashioned and romanticized. Then comes the war, and in you’re in a different film.

All that was suggested in the screenplay. (Co-writer) Robert Shenkkan says this movie is told in two acts, not three. You take something innocent and retro and uncomplicated from another era and throw it into hell. It’s the shock of stepping on the innocence of the era. That’s essentially what the war was like for these guys who saluted the flag and loved Mom and apple pie and their country. They went from a Norman Rockwell painting into a Hieronymus Bosch.

This movie continues a theme that’s present in a lot of your films, both as an actor and director: The courage of staying true to one’s beliefs in a world that’s telling you not to.

There’s something dynamic about the salmon swimming upstream. In a chorus of disapproval, someone hangs onto their stout belief. They even doubt themselves, because the majority is railing against them. But they have enough backbone and faith to go with their first gut instinct. It makes them singular. It makes them stand above the rest. In short, it makes them a hero, particularly if they prevail.

And it’s not always that their lives are saved. If you look at any of the great heroes throughout history, how do those guys end up? Usually dead. Somebody like Desmond, who kept putting it out there, should have ended up dead. How does that guy walk away from what he did? He was crawling into enemy machine-gun fire to save somebody else. He deserves every last bit of his Medal of Honor.

Since “The Passion of the Christ” came out in 2004, there has been an uptick in movies that deal explicitly with faith. You’re starting to work on a sequel about the resurrection of Jesus, and Desmond’s religious beliefs as a Seventh-day Adventist form a big part of this story.

I went to the epicenter of spirituality with “The Passion,” and it wasn’t the third rail. It wasn’t an outcast kind of film. I think people realized there’s an audience appetite for that kind of stuff. There have been so many things have come out since then that approach it or echo that. Even Clint Eastwood does that in his films now. He had a hint of it in “American Sniper.” But he doesn’t jump in all the way with that kind of theme.

I don’t think I jumped in all the way with this one either. But those beliefs were intrinsic to who Desmond was. He attributed everything to a power greater than himself. It was necessary to delve into that. Also, since you’re dealing with hell on earth, it’s good to have someone in the midst of it who is operating on a whole other realm above that. That for me is the most interesting part of this story. That’s why I don’t think it’s a war film. I think it’s a love story, because greater love hath no man than he who sacrifices his life for his friend. Desmond demonstrated this repeatedly. That’s the transcendent part of this movie, I think.