This Military Couple’s Wedding Cake Puts All Others To Shame

On Saturday, Sept. 10, Army veteran Mike Forbes and his fiancee, Bob, exchanged vows in front of a small crowd... 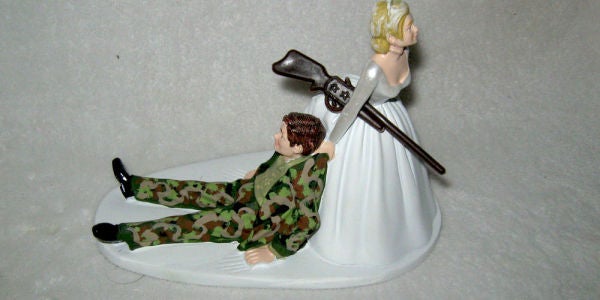 On Saturday, Sept. 10, Army veteran Mike Forbes and his fiancee, Bob, exchanged vows in front of a small crowd of friends and family.

There was something a little different about this wedding. For instance, at least one llama was in attendance, which, according to the groom, is Bob’s “spirit animal.”

The wedding guests and llamas really seemed to hit it off.

However, the four-legged guests were not the most unusual part of the nuptials, which were held at Empress Hill Llama Rose Farm and Gardens in Poulsbo, Washington. Back in April, Bob had encouraged Mike to pick out a groom’s cake — a wedding tradition still practiced in the South as a way for the groom to show off his personality.

Apparently, Mike really wanted to express his deep love for Meals Ready-to-Eat because he chose an MRE-shaped wedding cake. Cheese tortellini in tomato sauce, to be precise.

The red-velvet creation, made by Crumbs Cakery on Bainbridge Island, even included the now-iconic “rock or something.”

With all the MRE varieties, it’s hard to imagine how Mike could pick just one that most represented his inner being.

“I did extensive research (five minutes at least) to find the latest 2016 MRE menus (this was harder than it sounds), then went with Cheese Tortellini,” he told Task & Purpose. “It's a pretty common one and also because it's vegetarian and fit well with the catering menu, which was pastas.”

The newlyweds also had a more traditional wedding cake, with vanilla cream cheese frosting and blackberry conserve smeared in between the tiers.