Violent video games have become embedded within American culture over the past several decades and especially since 9/11. First-person shooters,... 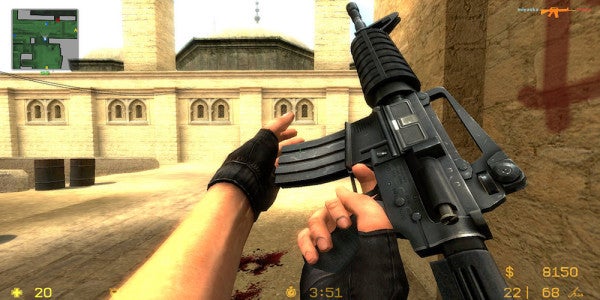 Violent video games have become embedded within American culture over the past several decades and especially since 9/11. First-person shooters, in particular, have become increasingly popular.

These games – in which players are positioned behind a gun – have turned a generation of kids into digital warriors who fight terrorists and battle alien invaders. Many play first-person shooters for pure, innocent enjoyment. Some like achieving objectives and being a part of a team. And, for others, it simply feels good to eliminate an enemy – especially someone who’s trying to harm them.

For the U.S. military, the rise of first-person shooters has been a welcome development. In recent years, the military has encouraged many of its soldiers to partake in the thrill of violent video games as a way to continue combat training, even when not on active duty. (In fact, using games to teach military tactics has been a longstanding practice in the U.S. military: Before video games, troops were encouraged to play military-themed board games.)

The games allow soldiers to take their combat roles home with them and blur their on-duty responsibilities with their off-duty, noncombat routines and lives.

But what effect have these video games had on U.S. soldiers? How accurately do they depict military life? And do they actually help recruit, train and retain troops?

From battle screen to battlefield

As part of a study, we interviewed 15 current and former members of the U.S. military who were between 24 and 35 years old to understand the role violent first-person shooter games played in their recruitment and training.

The majority of interviewees told us it was important to stay in the mindset of a soldier even when not on duty. To them, first-person shooters were the perfect vehicle for doing this.

Game preferences varied among the soldiers we interviewed, but popular titles included Ghost Recon Advanced Warfighter 2 and ARMA 2, which a current member of the Army said was “one of the most hardcore assault experiences in gaming.”

Meanwhile, an Iraq War veteran describedCall of Duty: Black Ops 2 and Call of Duty: Modern Warfareas “the ultimate first-person shooter experiences ever” and “intensive and highly realistic approaches to tactical combat. The choice of attacking with stealth or unleashing an all-out frontal assault full of mayhem is yours. It’s violent, it’s chaotic, it’s beautiful.”

In this, the Iraq War veteran seems to say that video games can reflect real-life combat situations, an attitude that others share.

But it’s tough to make the case that games accurately simulate what a soldier’s life is really like. First, military tours of duty are not solely made up of hard-charging, chaotic battles, like those in first-person shooters. The majority of soldiers won’t participate in any full-frontal combat operations.

Second – and, most importantly – in the digital world there are no legal and ethical considerations. When things go wrong, when innocent people are killed, there are no ramifications. If anything, the games warp these real-world consequences in the minds of players; in 2012, psychologists Brock Bastian, Jolanda Jetten and Helena R.M. Radke were able to use brain scans to show that playing violent video games had the potential to desensitize players to real-life violence and the suffering of others.

In a 2010 article for the Brookings Institution, political scientist Peter Singer quoted a Special Forces soldier who was involved in the production of “America’s Army 360,” a video game developed to recruit and train enlistees.

Real-life combat, however, was something entirely different.

“What I saw was a lot of them discovered levels of innocence that they probably didn’t think they had,” Wright wrote. “When they actually shot people, especially innocent people, and were confronted with this, I saw guys break down. The violence in games hadn’t prepared them for this.”

Thus video games might suck soldiers in – offering a tantalizing taste of the glory and excitement of battle. But they do little to prepare them for the types of threats that actually exist on the battlefield.

“When I really think of the government seeing that as training, I laugh,” one of our interviewees told us. “But I also feel a bit uneasy.”

Regardless of their effectiveness as training tools, violent video games can certainly act as a valuable tool for connecting the military with potential recruits. In addition to influencing the decisions of gamers to pursue military service, they can also be used to promote the geopolitical goals of the military.

Journalist Hamza Shaban, in a 2013 article for The Atlantic, described just how deep the Army’s relationship had become with the commercial gaming industry, creating what he dubbed a “military-entertainment complex.” According to Shaban, the games that emerged from this relationship – an exciting, simplified, easy-to-play version of warfare – encouraged gamers to consider a career in the military.

Meanwhile, games such as UrbanSim, Tactical Iraqi and Frontlines: Fuel of War teach players and potential recruits about the discourse of modern-day warfare. Missions include battling Islamic militants, winning over potentially hostile populations and establishing pro-Western, pro-democratic societies. They engage with the fundamentals of insurgency and counterinsurgency, present the dangers of improvised explosive devices and highlight the military usefulness of weaponized drones.

However, to some of the soldiers and ex-soldiers we spoke to, the value of playing first-person shooters amounted to little more than propaganda.

“The idea of us training using these games is a bit of a ,” one said. “What the U.S. seeks to achieve through the use of these games is not entirely within their control. It might be a cheap way of getting us involved … but it’s hardly ‘training.’”

Another called first-person shooters “more like brainwashing than anything.”

“But you have to be pretty stupid to buy into all this,” he added.

Scott Nicholas Romaniuk is a Ph.D. candidate at the University of Trento. Tobias Burgers is a doctoral candidate at Freie Universität Berlin. This article was originally published on The Conversation. Read the original article.