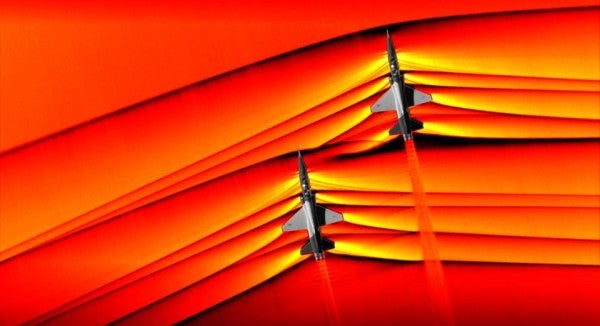 NASA is celebrating the fact that it recently photographed the interaction of shockwaves from two supersonic aircrafts in flight for the first time by sharing the fascinating images.

The U.S. space agency says that this accomplishment was 10 years in the making, and that it represents a significant milestone for its Aeronautics Research Mission Directorate. The images featured at the top of this post were made during recent Air-to-Air Background Oriented Schlieren flights at a base in Edwards, California.

These flights reportedly saw the successful testing of an upgraded system that makes high-quality images of shockwaves possible. NASA says that shockwaves happen when “aircraft merge together as they travel through the atmosphere and are responsible for what is heard on the ground as a sonic boom.”

“We never dreamt that it would be this clear, this beautiful,” J.T. Heineck, NASA physical scientist at the Ames Research Center, said in a news release. “I am ecstatic about how these images turned out.

“With this upgraded system, we have, by an order of magnitude, improved both the speed and quality of our imagery from previous research.

During the tests featured in these images, the space agency says it used two T-38 U.S. Air Force jets flying in formation at supersonic speeds about 30 feet from each other. The T-38 flying behind is said to be about 10 feet lower than the one in the lead.

“With exceptional clarity, the flow of the shockwaves from both aircraft is seen, and for the first time, the interaction of the shocks can be seen in flight,” NASA writes.

This work is part of NASA's efforts to make the commercialization of supersonic travel possible. Supersonic flights are typically not allowed over land, so results from the space agency's series of tests will recommend new standards to replace existing restrictions.

As for what these tests could lead to that matters to the general public, the goal “is to eventually accommodate jets that can fly from New York to Los Angeles in two hours.”

In regards to the upgrading imaging system that captured the photos at the top of this page, the space agency says it will be used to capture “crucial data” to confirm the design of its $247.5 million X-59 Quiet SuperSonic Technology X-plane.

“What's interesting is, if you look at the rear T-38, you see these shocks kind of interact in a curve,” Neal Smith, a research engineer with Aerospace Computing at the NASA Ames center, said in the release.

“This is because the trailing T-38 is flying in the wake of the leading aircraft, so the shocks are going to be shaped differently. This data is really going to help us advance our understanding of how these shocks interact.”

NASA awarded Lockheed Martin a $247.5 million contract to build its experimental X-Plane back in April 2018. Once the plane is fully tested and deemed safe to fly in the National Airspace, it will begin making “supersonic flights over select communities to measure residents' reactions” in 2022.

The X-plane's design is based on a Lockheed Martin preliminary design, which will make an aircraft 94 feet long with a wingspan of 29.5 feet and weigh in at 32,300 pounds with a full tank of fuel.

Once complete and ready for flight, the space agency says the plane will cruise at an altitude of 55,000 feet at 940 mph, and that its top speed will be a projected 990 mph with one pilot in the cockpit.

“These efforts will help advance knowledge of the characteristics of shockwaves as NASA progresses toward quiet supersonic research flights with the X-59, and closer toward a major milestone in aviation.”

SEE ALSO: What We Know About The Air Force's New Military Space Plane