It’s official: The National Infantry Museum and Soldier Center was declared the No. 1 “Best Free Museum” in America on... 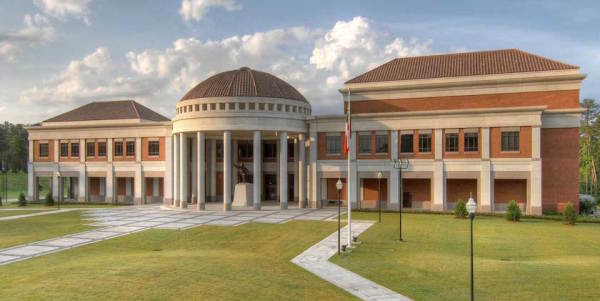 It’s official: The National Infantry Museum and Soldier Center was declared the No. 1 “Best Free Museum” in America on Friday after a four-week vote among 20 of the top museums across the U.S. The final list includes the Top 10 of the bunch.

“Victory is sweet” will be the theme of a special celebration by the museum to thank all of those who supported and voted for it during the online competition, said the facility’s communications director Cyndy Cerbin.

“We just haven’t firmed it up yet. We didn’t want to pull too many triggers until we knew for sure,” she said. “But we’re planning a community thank you probably for Friday of next week … We’ll have cake for everybody. Beyond that, we’re working on bands and cheerleaders and fun stuff like that. I haven’t booked any of it yet.”

The USA 10 Best Readers’ Choice honor for the Columbus museum, which opened in 2009 at a cost of $110 million, followed a tense competition between the National Infantry Museum and the Cleveland Museum of Art in Ohio. The Cleveland facility was a “close runner up,” the Readers’ Choice site said. Both already are listed as the No. 1 attractions in their respective city’s by online site TripAdvisor.

The 190,000-square-foot National Infantry Museum climbed from No. 6 in the vote about a week into the contest to No. 1, before the Cleveland attraction overtook it about a week later. The online balloting continued until noon Monday, with a last-minute vote for the Columbus facility indicating it was “1 out of 20” in the rankings. But the results were not released until noon Friday.

“I can’t get over how passionate our visitors have been about making sure we won this award,” said National Infantry Museum Foundation President Greg Camp, a retired U.S. Army colonel. “They were excited to tell us that they were voting every day and they made sure their friends voted, too. We can’t thank everybody enough for their support and enthusiasm. This is a real feather in the cap for Columbus, the region, and the entire state of Georgia.”

Cerbin said the top museum feat will be a source of pride for the staff and the more than 300,000 annual visitors who walk through its doors and on its grounds. But it also will be an impetus for marketing to boost attendance and for Camp to seek out sponsorships to pay off the remaining debt connected to its construction — which is just under $8.7 million — and help with future operating expenses. The museum also expects to be featured in USA Today’s online and print travel sections.

“We just finished the content for a sponsorship packet that we will be taking to potential sponsors,” she said. “We’ll include the badge that says the National Infantry Museum is the number one free museum in that packet, which means sponsors now will have the opportunity to realize that this museum is bigger than they may have realized.”

The National Infantry Museum and Soldier Center features several exhibits and halls of honor chronicling various conflicts and campaign exploits through the military’s 240-year history. A World War II Company Street and Vietnam Memorial Plaza both honor moments in time, while the museum’s signature attraction, called “The Last 100 Yards,” focuses on the fact that it often takes infantry soldiers — boots on the ground — to claim the final piece of earth in a firefight or battle. The facility also includes a giant-screen theater and restaurant.

“Having a 10 Best endorsement will give travelers one more reason to discover for themselves how the NIM honors soldiers and the sacrifices they make preserving our freedom,” Carmen Cavezza, chairman and chief executive officer of the National Infantry Foundation, said as the competition kicked off in early August. Cavezza also is a retired U.S. Army lieutenant general, former Fort Benning commander and former Columbus city manager.

Here are the Top 10 Best Free Museums in America