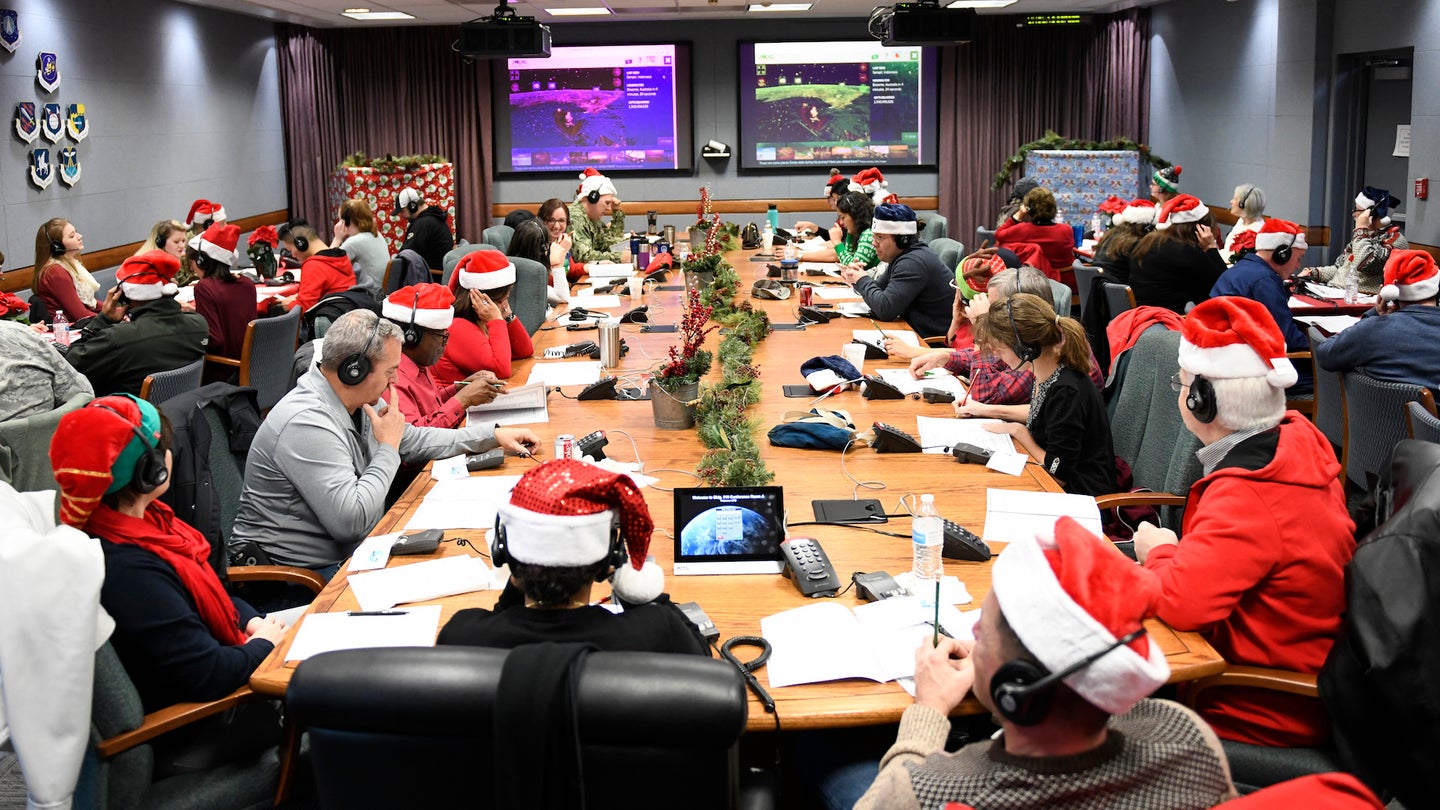 “He exists as certainly as love and generosity and devotion exist, and you know that they abound and give to your life its highest beauty and joy. Alas! how dreary would be the world if there were no Santa Claus. . . . There would be no childlike faith then, no poetry, no romance to make tolerable this existence. We should have no enjoyment, except in sense and sight. The eternal light with which childhood fills the world would be extinguished.” — Francis Pharcellus Church, Sept. 21, 1897

America teetered on war when an unlisted line at the Continental Air Defense Command in Colorado Springs rang on a December day in 1955. A call to the top-secret number at an agency responsible for defending the United States against air attacks did not bode well. In fact, it very well could signal war with the Soviet Union.

Col. Harry Shoup, a seasoned Air Force officer and director of operations for CONAD—a precursor to NORAD—steeled himself before picking up the receiver and identifying himself.

We can, perhaps, imagine the colonel’s surprise when he heard a small voice on the line asking whether he was Santa Claus.

It didn’t take long for Shoup to realize there had been some sort of mix-up. Not wanting to disappoint the child, the father of four quickly slipped into the role of the big man himself. Afterward, the girl’s mother explained to Shoup that a Sears ad in the local newspaper invited children to call Santa on his private line. But a misprint instead sent callers to an organization that monitored the skies above the continental United States. Perhaps there are really no accidents, only fate misnamed.

While Shoup sorted it out with the phone company, he had his airmen take the calls. That Christmas Eve, CONAD informed the public that it was tracking Santa’s sleigh from the North Pole, according to the History Channel. Although the military had occasionally announced sightings of Santa’s sleigh, this was different. The Department of Defense had officially entered the business of tracking one of the most beloved and enduring symbols of Christmas.

Since 1958, that job has belonged to NORAD—the North American Aerospace Defense Command—a binational organization formed between the United States and Canada that tracks everything from airplanes and missiles to space shuttles and Santa’s sleigh. Technology has come a long way since that Cold War Christmas Eve more than 65 years ago, and so has the business of tracking Santa. NORAD spends all year getting ready for that singular mission, much like Father Christmas himself, and today children of all ages can find Santa’s location in real time (and in eight languages) at NORAD Tracks Santa beginning at six a.m. Eastern Standard Time on Christmas Eve. In addition to keeping tabs on Santa’s miniature sleigh and eight tiny reindeer, some 900 volunteers will answer an estimated 150,000 calls from around the world on Dec. 24 at the program’s headquarters at Peterson Space Force Base, Colorado.

The War Horse spoke to Air Force 1st Lt. Sean Carter, the program manager for NORAD Tracks Santa, and Canadian Maj. Gen. Patrick Carpentier, director of operations at NORAD Headquarters in Colorado Springs, where the magic of Christmas will unfold once again this Dec. 24. Some questions and answers have been edited for clarity.

How does NORAD’s mission on Christmas Eve compare to what NORAD does the rest of the year?

Carpentier: It’s the same mission. As you know, Santa lives in the North Pole, and one of his main avenues of approaches is through the Arctic. It’s a perfect location for us to track when he first departs from the North Pole and heads for the International Date Line. That’s the first indication Santa is on his way.

I don’t think you can talk about NORAD and not talk about NORAD Tracks Santa. It’s always a part of the conversation. It’s also a way to let people know the importance and reality of our mission here at NORAD. There are people here on duty 24 hours a day, seven days a week, 365 days a year keeping North America safe.

What systems does NORAD use to track Santa?

Carter: We use three big systems: the North Warning System, a chain of highly advanced radar stations along northern Canada; our satellites; and our jets—F-15s, F-16s, F-22s, and the Canadian CF-18. Santa flies faster than starlight, so we have to leverage everything we’ve got to keep track of him. The most important aspect when it comes to tracking Santa is Rudolph’s nose. It’s comparable to a missile launch, which is one of the key factors in our ability to track him around the globe.

How close do you get to Santa’s sleigh?

Carpentier: Typically we will get close to visual range. Our fighter pilots can often wave to Santa. But we understand he is on his own mission, so we maintain a safe and professional distance from his sleigh to make sure we don’t impede his progress.

NORAD tracks objects on a daily basis. What compares to Santa’s sleigh?

Carpentier: There’s nothing that compares to Santa’s sleigh, I have to be honest.

How does Santa make it around the world in one night?

Carter: The best we can deduce, and a lot of it is classified, but Santa most likely operates within his own space-time continuum.

Carter: Our call center gets transformed into a festive, magical wonderland. There are decorations and all kinds of food, treats, snacks, drinks—contributors who, out of the goodness of their hearts, donate to our volunteers. Music is playing, there’s wild costumes and Santa hats. From what I understand, it goes incredibly fast. Volunteers work in two-hour shifts. They blink their eyes and their shifts are over. It’s faster than starlight.

Who volunteers at the call center?

Carter: Over half of them are historic volunteers. They have done it or their family has done it. Many volunteers are service members who are curious, and it’s something they always wanted to do and, now that they’re at the command, they’re jumping on the opportunity. For others, what better way to get into the holiday spirit than to take calls from kids all around the world? Some are lending their language skills. Kids are calling from overseas, and they speak almost every language you can imagine.

What are some of the more interesting calls that have come in over the years?

Carter: A lot of kids want to know, ‘Am I going to get what I asked for?’ We’re NORAD. We don’t actually work with Santa in that capacity. We’re not his elves. One little boy who, rather than asking where Santa was or what he could hope to find under his tree, wanted to know whether Santa would be able to find his mom that year, who was deployed overseas in the Middle East. It was his first year without his mom, and he wanted to make sure Santa would be able to get there.

One girl, rather than gifts, said all she wanted was for her brother, who was very sick, to feel better. One year, we had a caller who just wanted to confirm that Die Hard was a Christmas movie. NORAD confirmed it is a Christmas movie. That seals the deal. The story has been passed down enough that it’s the thing of lore at this point.

Carpentier: Last year, Army Gen. James Dickinson, commander of U.S. Space Command next door, was receiving calls. One was very special for him. He answered and thought he recognized the voice. It turned out it was his grandson. The chances of that happening are pretty incredible. Phone calls like that happen every year.

Why do you think a tradition that started with a wrong number nearly seven decades ago continues to endure?

Carter: I think it’s that reaffirmation that there is still a bit of magic alive out there, and an organization as big as NORAD is able to confirm that for folks. It’s very life-affirming. We’re able to say, ‘Hey, we’ve got Santa in our sights, we’re tracking him, he’s alive and well, he’s visiting the homes of all the children who believe.’

Carpentier: Bringing joy and peace to the world is something that will always be required. And Santa is the main guy who makes that happen. We’re happy to support him on his yearly mission.