On Desperate Ground: The Marines at The Reservoir, the Korean War’s Greatest Battle by Hampton Sides, Doubleday, 416 pages The... 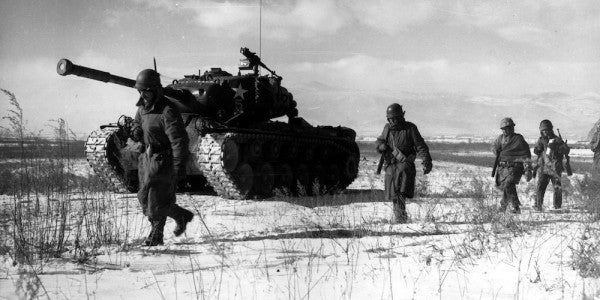 On Desperate Ground: The Marines at The Reservoir, the Korean War’s Greatest Battle by Hampton Sides, Doubleday, 416 pages

The forgotten war, they called it.

Yet the Korean War, or conflict, or police action — whichever term you prefer — is a persistent mosquito of historic proportions. Technically, the combatants remain frozen in a truce, the longest time-out in modern warfare. It may seem we’ve forgotten those who fought it, but the war itself lives on as a threat that sometimes bursts forth like a morning barrage from North Korean artillery.

Santa Fe historian Hampton Sides, whose catalogue includes Ghost Soldiers, Blood and Thunder, and Hellhound on His Trail, has written a timely reminder of one of the best-remembered episodes of that war. In his new book, Sides creates for contemporary Americans a story straight out of ancient mythology, of warriors remembered for their fantastic deeds.

The book comes at an opportune time. Sides’ brilliant reporting and crisp storytelling provides a backdrop for events on the world stage almost 70 years later. On Desperate Ground: The Marines at the Reservoir, the Korean War’s Greatest Battle is a streamlined retelling of the fight that took place in what is now North Korea in November and December of 1950. The online Encyclopaedia Britannica describes the battle as “one of the most-storied exploits in Marine Corps lore.”

Indeed it is. Part of Marine Corps boot camp involves lessons in Corps history and traditions, during which recruits ingest the tale from Tun Tavern to Khe Sanh and beyond. The story of the 1st Marine Division at the “Frozen Chosin” is a climax in that narrative. It’s an epic worthy of Homer: a desperate band of soldiers, surrounded. An inspired leader, larger than life. A foe bent on the complete destruction of its enemy. In their will to survive, the Americans are just as crafty as their Greek forebears.

In the boot-camp version of the tale, the Chinese Communists (or ChiComms) make the ultimate mistake of surrounding a Marine division at the Chosin Reservoir, a water body in a mountain fastness just south of the Chinese border. By Marine brio, surrounded is fortuitous, for it simplifies the situation. The sub-zero cold is bitter. Thousands of Chinese soldiers appear out of the snowy wastes, driven by their officers and the shrill calls of whistles and bugles. They are met and mowed down by resolute and outnumbered gyrenes fighting from frozen foxholes.

First among them was Col. Lewis B. “Chesty” Puller, who by force of will inspired his Marines to superhuman combat. The Marines sliced through the ChiComm hordes and marched to glory. (At least that’s the version I recall between boot-camp classroom catnaps.) Puller, who commanded the First Marine Regiment, is a Marine legend. The bulldog mascot at the Marine Barracks in Washington, for example, is “Sgt. Chesty.”

However, Sides gives Puller but brief mention. The warrior king of On Desperate Ground is Puller’s immediate superior, Maj. Gen. Oliver Prince Smith, “The Professor,” and commander of the First Marine Division. According to Sides, Smith, a UC–Berkeley graduate and former Northern California logger, was regarded as an intellectual — an atypical sort of Marine. “He was fluent in French, drank sparingly, read the classics and never cursed. An expert gardener, he cultivated roses in his spare time,” Sides writes. He’s a champion for the 25,000 men in his command — without his leadership, Sides makes clear, these men were doomed.

Sides begins the story with the brilliant, end-around amphibious landing at Inchon. This move by Gen. Douglas MacArthur, head of the United Nations Command in Korea, relieved U.N. forces trapped by the North Koreans at Pusan. Flush with that success and the subsequent fall of battered Seoul, MacArthur ordered his men to the Yalu River and a potential end to the war. The men, the story goes, would be home by Christmas.

MacArthur and his subordinate, U.S. Army Maj. Gen. Ned Almond, ignored reports that Chinese troops had crossed the Yalu, the border with China. Mao apparently feared the United Nations would not stop there, and besides, the reservoir itself provided hydroelectric power to his nation. The Chinese Ninth Army Group lay in wait in the ridges above the serpentine mountain roads that led to the Chosin Reservoir. As the Marines and their Army brethren of the Seventh Division entered the trap, the temperatures plummeted.

The battle of the Chosin Reservoir is not a new topic for military writers, but Sides imbues his version with elements of mythology. Acts of bravery worthy of Achilles are followed by improbable feats of engineering. In one episode, a Chinese-American Marine lieutenant leads a column of 500 through untracked snow to rescue a company of fellow Marines. In another, a Navy flier crash-lands his Corsair to rescue his wingman, who has been shot down by the Chinese.

Combat engineers, meanwhile, rush to scrape a landing strip from frozen earth while ducking incoming Chinese fire. The field allows wounded men to be evacuated in planes bringing food and ammo. Later, troops devise a method of repairing a bridge destroyed by the Chinese at a chokepoint along the Americans’ escape route.

Readers of military history will find Sides’ account satisfying but not burdened by detail; the book is devoid of blow-by-blow troop movements and military terminology, for the most part. And for the average reader, Desperate Ground is a well-told tale. Sides employs a reporter’s eye and spare writing style that keeps a steady pace. No Greeks of antiquity outdid these Americans.