Sherry Jenkins, a retired Air Force chief master sergeant, got to rock 'n' roll all day and all night with... 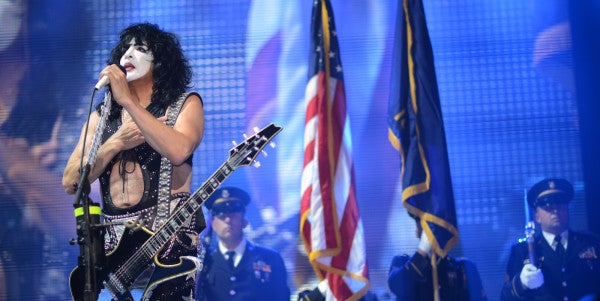 Sherry Jenkins, a retired Air Force chief master sergeant, got to rock 'n' roll all day and all night with one of her favorite bands Monday.

Jenkins and her husband, Tim, were invited to be KISS roadies for the day during the band's show at The Broadmoor World Arena in Colorado Springs. Sherry said she has been a fan of KISS for about 35 years.

“I grew up listening to them, and you'll see the older you get you stop listening to some of the things you used to listen to,” she said. “I'm still a huge fan.” The couple started the day putting together gift bags for VIP fans. Then they watched KISS perform an acoustic set for VIP fans and had their picture taken with the band before enjoying the show.

“My real favorite was the last one that they played, which was 'Rock and Roll All Nite,'” Sherry said.

Before the show was over, the Jenkinses accepted a $150,000 check from KISS onstage on behalf of Hiring Our Heroes. The audience recited the Pledge of Allegiance and shouted “USA, USA,” while she and Tim were onstage. Sherry said the show was fun but loved that KISS is giving back to veterans.

“It's more about taking care of fellow veterans and their family members,” Sherry said. “That's my passion, that's what I do. This is super exciting because KISS is a big supporter.”

Jenkins is an Army Career Skills Program Coordinator at Fort Carson, where she has served since May 2014. She is responsible for identifying opportunities to provide skills for transitioning soldiers to highly skilled, high-demand jobs in the civilian sector.

KISS plans to hire veterans or current members of the National Guard or the reserves to be a roadie for the day at each of the band's more than 30 U.S. concerts, said Hiring Our Heroes, which partnered with the band for the program. KISS also is donating tickets to veterans in each community they perform in.

Dean Snowden, KISS ambassador for 18 years, said the program has been around for about four years and is an opportunity for veterans and everyone involved to learn something.

“It gives everybody perspective,” Snowden said. “It gives them perspective maybe on what we do, which is very militaristic-like in the way we have to have everybody communicate and the way we set up the show and tear it down. Then again, nobody's shooting at us, so that makes it a lot easier. For the band, they get to see a veteran and they get to show them a little bit of respect and love.”