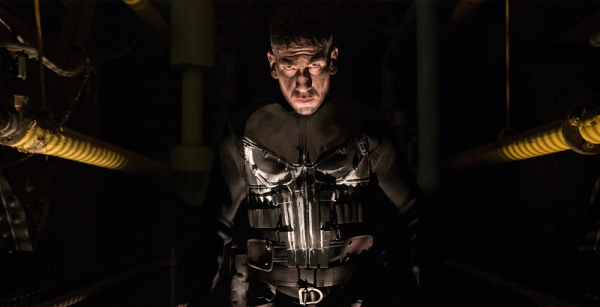 The very same day that Netflix released Marvel’s The Defenders — a superhero mashup featuring Jessica Jones, Luke Cage, Daredevil, and The Iron Fist — the streaming site decided to up its crime-fighting game with an Aug. 18 teaser trailer for the hotly anticipated Daredevil spinoff, The Punisher, slated to air sometime in 2017.

Then, on Aug. 22, Netflix and Marvel started trolling fans clamoring for the return of Jon Bernthal (The Walking Dead) as The Punisher. Netflix dropped a new promotional image showing Frank Castle, a recon Marine-turned-boogieman for the criminal underworld, kitted out in his skull-emblazoned body armor, looking ready to take out whatever idiot villain gets in his way. His iconic uniform seems to have gotten an upgrade. Netflix’s Punisher has traded in the historically white skull t-shirt and trench coat we’ve seen on previous versions of the character for a more tactical look.

Castle left the military a war hero, but took on the mantle of The Punisher after his family was brutally murdered in a gang-related shooting. Driven by revenge and the conviction that those who operate outside of the law don’t deserve its protection, Castle hunts down criminals with military precision, and unlike The Defenders, he just straight-up wastes them.

We’re going to have to wait a little longer for The Punisher to drop down on us — not unlike the criminal quarry he hunts. Crap, that’s terrifying.