The first trailer for the upcoming super hero movie ​"Bloodshot​" just dropped, and in addition to being nearly three minutes of non-stop special effects, it's also got a strong military vibe, and a revenge story reminiscent of ​"The Punisher." 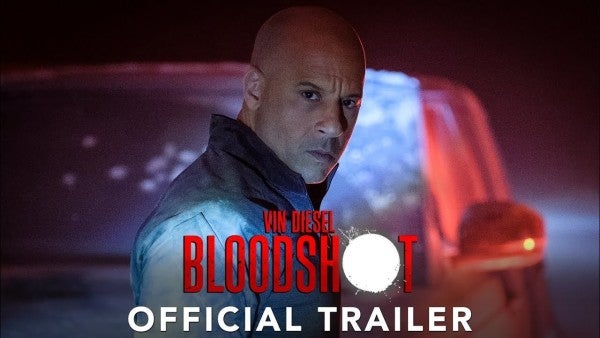 “Just walk it off,” is typically the go-to solution for a scrape, a light sprain, or some other superficial injury.

Unless you're a super soldier with an army of nanites swarming throughout your body, repairing wounds as quickly as they form (or a CGI-enhanced Vin Diesel), in which case “just walking it off” also cures a shotgun blast to the fucking head:

The first trailer for Sony's upcoming super hero movie Bloodshot just dropped, and in addition to being nearly three minutes of non-stop special effects, it's also got a strong military vibe, and a revenge story reminiscent of The Punisher (which spawned a Netflix series that also included a wide range of military and veteran characters.)

Directed by Dave Wilson, and set to hit theaters on Feb. 21, 2020, Bloodshot stars Vin Diesel as Ray Garrison, a soldier who's rebuilt after his death by a mysterious — and let's just assume, nefarious — corporation. Infused with a swarm of nanites (tiny little robots), Garrison is able to heal almost instantaneously, and seems to have superhuman strength, which he uses to hunt down and kill those responsible for his wife's death. Figuring out how she died, and who's responsible appears to be one of the major plot points of the movie.

The trailer makes it readily apparent that the RST corporation, which conducted the experiment that turned him into an unstoppable (and literal) killing machine, may not be above board. Actually, it looks like what you might get if Lex Luther ran DARPA, or maybe even the Department of Veterans Affairs: There's a few other ex-mil-looking characters — based on the high and tights — who seem to have undergone enhancements of their own.

Bloodshot is based on the comic book series by Valiant Comics, and the upcoming action flick stars Guy Pearce, Eliza Gonzalez, Sam Heughan and Toby Kebbell alongside Diesel.