DEBATE THIS: Is It Important For The US President To Have Military Experience?

THE FACTS: One of the most important roles the president of the United States must fill is that of commander-in-chief.... 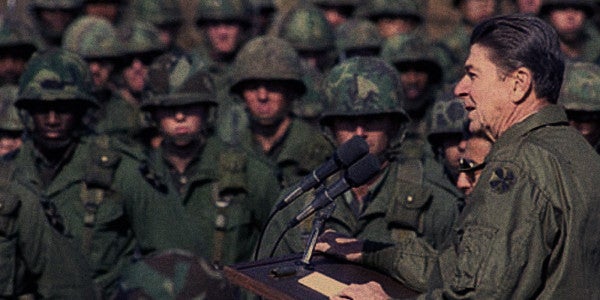 THE FACTS: One of the most important roles the president of the United States must fill is that of commander-in-chief. The president wields America's mighty military. In discharging those duties, should military experience be required of the president? America has had war hero presidents before, the most recent being George H.W. Bush. But the last three presidents have had no real military experience, and the number of veterans in federal office has drastically diminished over the past half century. Is it important for the U.S. president to have served in the armed forces?

Whether the president needs military experience is hardly a debate. For starters, 12 of our 43 presidents never served in the military, and a number of others barely qualify as veterans, including Abraham Lincoln, who admitted his three-month non-combat enlistment was a move to remain employed. Despite their lack of military experience, many of these leaders served with great distinction. Lincoln ended a gruesome war, unified the nation, and abolished slavery. Franklin Roosevelt led us out of the Great Depression and orchestrated our victory in World War II. Bill Clinton saw the highest increase in jobs and third-highest GDP growth of all presidents in the past 60 years.

And how much of the president's job actually relates to the military? Defense spending comprises only 16% of the government's focus. Nearly half of the government's attention is dedicated to social security (24%) and health care (23%). An October Gallup poll reveals that 42% of Americans think that our nation's most important problems are social issues (violence, racism, welfare, etc.). Another 33% indicated economic issues (unemployment, budget deficit, etc.). Only 13% of responses included military issues.

Perhaps we should instead ask, “Is it important for the president to have experience in social work? Economics? Health care? Must the president be a woman in order to understand the issues affecting 51% of our population? A minority to address our racial tensions?” The answer to all of these questions, including the one regarding military service is “No.” The president need only be a person whom Americans can trust to surround him or herself with experienced professionals, leverage their guidance, and make decisions that serve the greater good.

It is simply wrong to say that a president can't do a great job without military experience — as many presidents have already demonstrated.

Rob is a veteran of the U.S. Marine Corps and a graduate of Harvard Business School. He is passionate about many service-related issues and appreciates a healthy debate.

America is in dire need of a president who has served in the military. For nearly a generation, the American people have endured presidents who lack accountability, while increasingly making policy out of political exclusivity. In the military decisiveness, personal accountability, and inclusive problem solving are the rules. Leaders in the military are taught to develop and choose the best plan by including whatever and whomever can contribute. This is because they understand the potential impact of their decisions as few others can.

Every day, military leaders wake knowing that the lives of their people hang on their decisions; therefore, every effort to get things right is a must. It is the ultimate pressure cooker, where you are held accountable for your decisions, which could cost lives. Fancy degrees from elite institutions may speak volumes about one's intellectual capabilities, but no degree is as challenging or developmental as military leadership, particularly in combat.

Past veteran presidents such as John F. Kennedy and Ronald Reagan embodied this mindset and were wildly successful. They too came to office in uncertain and dangerous times. But, by accepting ideas from all sides, they chose the best path for America, not just for party or special interests. This led to periods of unparalleled prosperity, the Civil Rights Movement, and the end of the Cold War. We would do well to elect a veteran as they have proven to be inclusive and accountable, and we should not just settle for another politician who is proud that political opposition is “the enemy.”

Jim lives and works in Baltimore, Maryland. He served as a Marine infantryman from 2005-2010.