DEBATE THIS: Should Assault Weapons Be Banned In The United States?

THE FACTS: The right of all Americans to keep and bear arms is enshrined in the Second Amendment of the... 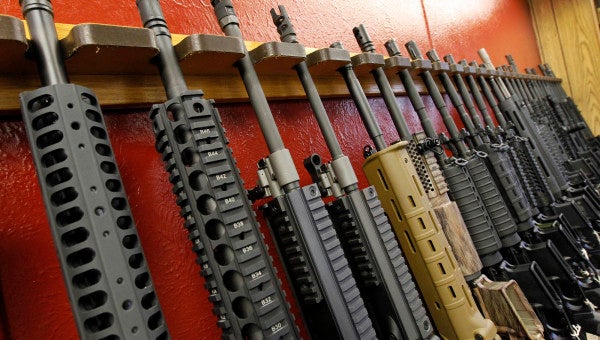 THE FACTS: The right of all Americans to keep and bear arms is enshrined in the Second Amendment of the Constitution. And bear them we have — an estimated 300 million guns exist in the United States, nearly enough for every man, woman, and child to each have one. From 1994–2004, federal law banned semi-automatic weapons with certain features and capabilities. Guns are a big part of American culture, but as a society, have we crossed a line? Terrible mass shootings riddle the news cycle and corners of this country are plagued by gun violence. America was reminded of this fact just recently, when a gunman opened fire at a community college in Roseburg, Oregon; killing nine and wounding nine more. Should we rethink what kinds of guns are in the hands of everyday Americans? Should America ban assault weapons?

Not only do I believe we should ban assault weapons, we need to define them more broadly. I propose we define “assault weapons” as any semi-automatic weapon capable of firing rounds size 9mm or higher, to include shotguns, with a magazine capacity higher than 10. I believe this because whether for hunting, home defense, or sport, civilians do not need more than 10 rounds to accomplish the mission. Regardless of this ban, we should require a minimum of background checks, mental health screening, and firearms safety and employment training (on a five-year recurring cycle).

Many opponents will say that criminals don't follow the law, which is true. However, most of the shootings we are seeing in the news are not being committed with firearms obtained illegally. These are weapons that are being purchased legally either by the shooter or someone close to the shooter. Almost invariably, we find that the shooter is suffering from some sort of mental illness and that there had been warning signs. The efforts listed above would make some progress on the issue, without being overly restrictive or violating the Second Amendment. The Second Amendment states that the right to keep and bear arms shall not be infringed, but gives the reason to maintain a well-regulated militia. It does not say that citizens should be able to keep and bear any and all type of arms. Further, the training and screening requirements would go very far to keep the militia well-regulated.

Yesterday's ideas will not solve tomorrow's problems, especially those we've already tried, and seen fail. From 1994 to 2004, assault weapons were banned in the United States via federal law. In 2013, Eric Holder's Department of Justice concluded, “A Complete elimination of assault weapons would not have a large impact on gun homicides.” Last year, the New York Times and the Center for American Progress agreed with the Justice Department's conclusions. For some perspective, in 2013, 285 people were killed with rifles, 1,490 were stabbed to death and 5,782 were murdered with handguns. As far as mass shootings, the largest in American history was committed with a handgun, as was the attack on Gabby Giffords along with the massacre at Ft. Hood.

Assault weapons, which are semi-automatic and function the same way as a pistol, absolutely, positively have legitimate civilian uses that range from self-defense to sport. Obviously, the naysayers fail to mention that virtually every firearm ever devised was originally designed for the military, such as the now-traditional lever and bolt-action rifles.
If we are to address persistent issues, especially those that disproportionately affect minorities and our most at-risk communities, reason, research and respect for rights must trump emotion and debunked political memes. Gun violence has more to do with education and economic opportunities than a specific kind of weapons technology. It's time for us to move beyond failed policies and regulate guns for reasons other than their appearance.