DEBATE THIS: Should Marijuana Use Be Legalized Under Federal Law For Medical Purposes?

THE FACTS: Under federal law, Veterans Health Administration doctors are prohibited from making recommendations or offering their medical opinions to... 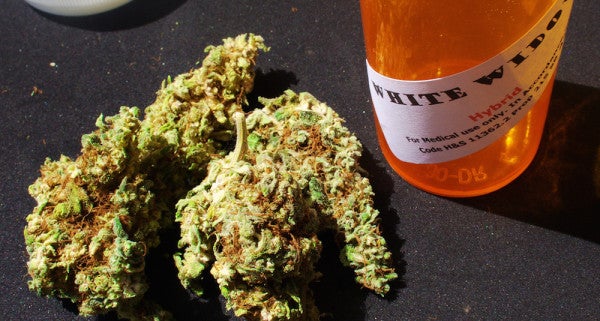 THE FACTS: Under federal law, Veterans Health Administration doctors are prohibited from making recommendations or offering their medical opinions to patients about the use of medical marijuana. Currently, no doctors — whether private sector or government — can write prescriptions for marijuana, even in states that have passed laws legalizing it for medical purposes. Doctors can only “recommend” it for medical use. A recent Senate provision would allow VA physicians to recommend marijuana to veterans seeking care in states where it is legal. The provision comes amid growing calls to lift the federal ban of marijuana, particularly so people coping with post-traumatic stress or chronic pain can use it without fear of criminal prosecution or losing their VA benefits.

I've never smoked marijuana in my life, I don't have a personal stake in this argument. From a policy standpoint, however, who are these laws protecting, and what are they protecting people from? We've seen California, Colorado, and Washington recognize this reality — the reality that harmful marijuana laws contribute to a broken and overburdened criminal justice system. Our prisons are filled with far too many nonviolent offenders. Where veterans are concerned, how is society threatened if a young veteran smokes marijuana to help cope with the symptoms of post-traumatic stress?

Marijuana has legitimate medicinal uses. In May, the New England Journal of Medicine reported that more than 75% of doctors approve of medicinal marijuana. Marijuana has also been shown to alleviate the symptoms of post-traumatic stress; offering, for many, a far better alternative to the antidepressants and other mood altering drugs the VA has heavily relied on to treat post-traumatic stress.
We've seen over the past 40 years that criminalizing marijuana doesn't stop people from using it. The use of marijuana is so widespread, indeed, that the last three presidents of the United States have openly admitted to using it. I believe this newest generation of veterans will go on and achieve great things, the only thing these laws are doing is jeopardizing a bright and promising future.

Having been a DEA agent for 12 years in New York City, I have seen firsthand the negative impact of marijuana use. Marijuana is addictive; it is the gateway drug on the street, and I am against its legalization for medicinal purposes.

During the past few years, there has been quite a bit of public debate about this issue and a number of states have ignored federal law and legalized marijuana for personal and medicinal use. The supporters argue that if marijuana is legalized, it can be taxed and regulated. Both are valid and true arguments. However, the American Medical Association, the nation's largest medical group, still considers cannabis to be a dangerous drug, and for scientific reasons, does not believe it should be legalized. Additionally, marinol, a drug that includes the active ingredient in marijuana (THC), is an approved alternative that can be prescribed by a doctor.
In my experience, the medical marijuana “patients” I came in contact with didn't have a true illness. They were individuals who just wanted to smoke marijuana, get high, and they found the legal loophole to do so. On a human level I am sympathetic to people who are genuinely suffering from an illness. However, on a broader scale, the legalization of marijuana, I believe, will lead to severe misuse, addiction, and a less productive society.