THE FACTS: Battlefield and Mass Effect have become two of the biggest game franchises of the past decade from publisher... 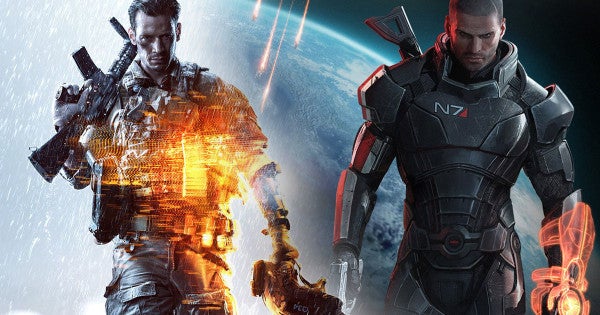 THE FACTS: Battlefield and Mass Effect have become two of the biggest game franchises of the past decade from publisher EA Games. Developed by Swedish games studio Digital Illusions CE, the Battlefield series began in 2002 with Battlefield 1942, a groundbreaking, multiplayer first-person-shooter that featured 64-player combat on the famous battlefields of World War II. The hallmark of all Battlefield games is the large-scale combined arms experience, with armor, aircraft, and naval vessels supporting infantry in huge online maps. Legendary role-playing-game developer Bioware created a whole new universe with the release of Mass Effect in 2007. The trilogy of Mass Effect games chronicles Commander Shepard's struggle against galaxy-ending threats and the difficult choices he must make along the way. In addition to the sci-fi action, the narrative is driven by Commander Shepard's relationships with the trilogy's many characters and the difficult moral decisions they face. While both games are extremely popular among service members and veterans alike, which one reflects a more realistic military experience?

Battlefield 4 brings a lot of things to the table that remind me of my ACH-wearing days. Of my biggest pet peeves from old “combat simulators” was when I unloaded a dozen rounds from an assault rifle into a flimsy wall the bad guy was behind, never making a dent. So while I could sit behind a couch in Mass Effect for days when engaging a Collector, in Battlefield 4, you quickly learn the difference between cover and concealment.

Also, in Battlefield 4, you better take into account the fact that the guy is 300 yards down the end of your barrel when you pull the trigger. Adjust for the drop in your round, and you can take care of your target quickly. Don't, and you've just given away your team's position. Even the fanciest rifle should still abide by the laws of physics, but I never had to account for gravity in Mass Effect 1, 2, or 3.
This doesn't even account for the other aspects of the game play that remind me of my days in uniform. The ego-pissing contests between characters, the banter going up and down the chain of command, the guy with more patches and “flair” on his kit than Brian from Office Space — these are all very real element of military life that other games neglect.
So if you're looking for a dose of real life, don't look up to space, just keep your eyes on target at Battlefield 4.

I've never been a big fan of Ghost Recon, Call of Duty, Battlefield, or any of the other “realistic” first-person shooters. They are flashy, visually stunning, and sometimes fun, but simple in their execution. For the most part, you navigate your avatar across a generally linear course, destroying everything in your path. Those games reflect the exciting, but proportionally minute experiences of wartime service. Even out on the tip of the spear, firefights full of explosions and sprinting around the battlefield happen infrequently.

While “realistic” first-person shooters might capture what military gear looks like and the sights and sounds of combat, Mass Effect does a better job at capturing the feel of military life.
The key events driving the plot are the decisions made in non-combat situations, interactions between leaders, subordinates, and outsiders, and the development of relationships over time. Mass Effect has its share of combat, but combat happens less frequently and chaotically, and usually between long periods of “inactivity” filled by user-driven dialogue, planning, and preparation.
The protagonist's choices across the series have real consequences for the player and the universe he or she inhabits. The dialogue choices made when speaking with teammates can either build or erode the trust and cohesion of the fighting force. The application of force is weighed against sympathy and aid in key decisions, when the right answer is not always apparent. Act too harshly and you risk alienating potential allies. Too soft and you open yourself to exploitation.
These nuances seem much more familiar to my military experience than anything I've seen in any “realistic” combat games.