A Dutch F-16 fighter pilot who bombed a civilian home in Iraq thought to be an ISIS car bomb factory said he has been grappling with causing the deaths of at least four civilians on September 20, 2015.

The pilot, who goes by the pseudonym "Stefan," recounted the events surrounding his bombing mission to two Netherlands-based journalists, Olof Van Joolen and Silvan Schoonhoven, in the De Telegraaf.

"I was the mission commander, I'd done all the planning," he said in De Telegraaf. "Everything until the debriefing was successful."

It was weeks after the mission when he received word that his targets may have not been against Islamic State militants in Mosul, but civilians who were held captive under ISIS's rule in the city. The family members he had killed included the Mayada Razzo, according to an extensive New York Times investigation in 2017.

Videos taken by drones of the bombings were previously uploaded to US Central Command's YouTube channel with the caption "COALITION AIRSTRIKE DESTROYS A DAESH VBIED FACILITY NEAR MOSUL, IRAQ," referring to the acronym for improvised explosive devices fashioned from vehicles.

Basim Razzo, Mayada's husband who was a Huawei account manager who studied engineering at Western Michigan University, told The Times that he only needed to see the first few seconds to confirm he was looking at his family's homes. Razzo's wife, brother, 21-year-old daughter, and 18-year-old son were killed in the bombing that was initially believed to be a factory that produced weapons for ISIS militants.

Razzo eventually returned to the neighborhood, according to The Times: "I'm numb. I'm just numb," he said in 2017.

"You are murderers," Razzo said in a comment of CENTCOM's now-deleted YouTube video, according to The Times. "You kill innocents with cold blood and then start creating justification."

CENTCOM — the combatant command which overseas U.S. operations in the Middle East, Northeast Africa, and South Asia — still has videos of previous airstrikes in their YouTube channel, but have since disabled a feature allowing commenting on videos.

"I will NEVER forget my innocent and dear cousins who died in this pointless airstrike," a 16-year-old cousin of Razzo's daughter reportedly added in the comments. 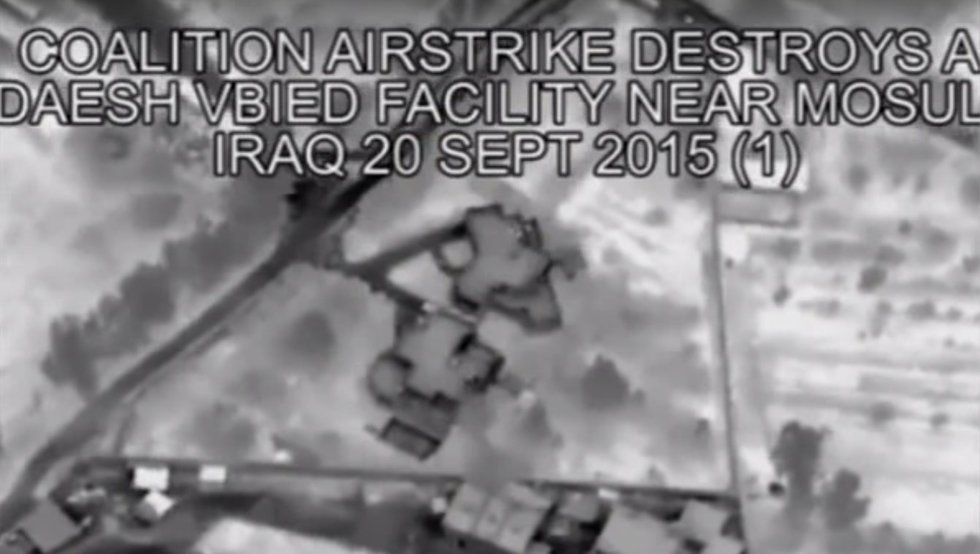 Drone footage of the home, moments before it was struck by the anti-ISIS coalition's munitions.(YouTube/U.S. Central Command)

Three weeks after the bombing, Stefan said he received a call saying that the U.S. was investigating the incident.

"After a few months it turned out that the target had indeed been incorrect," Stefan recounted to De Telegraaf. "Somewhere along the way, there was an error in the intelligence process."

"You think to yourself: 'It can't be, surely?' I felt nauseous when I heard the news," Stefan added. "I feel jointly responsible. I dropped that bomb and pressed the button. I ended the lives of people who had nothing to do with [our mission]. It was slap in the face. It went against everything we were there for. We were just there to help the Iraqi people."

A military report of the incident obtained by The Times indicated that the US-led coalition believed the homes were used as an ISIS command center. According to Razzo, the location was briefly used by ISIS forces, but was later abandoned after the militants took over the entire city. Despite finding "no overtly nefarious activity," the coalition deemed that a total of 95-minutes of drone footage of the neighborhood warranted a military strike.

Stefan said he viewed the drone footage of the bombing on YouTube and struggled with Razzo's story in The Times, which included pictures of his family members who were killed.

"One evening I was sat clicking on the internet. I saw the photo and thought: that's my target," Stefan said. "At that moment, I knew it would have been self-torture to look further — but I thought if I looked away at that point, that it would be cowardly."

"I'd wiped out half a family, to put it bluntly," he added. "There was one guy who had survived. Then I saw a name and a face and a picture of the children, taken a day before it had happened. A little later I put an end to that. I didn't sleep for two nights. Then life went on."

The pilot's account has sparked a rift in the Dutch military 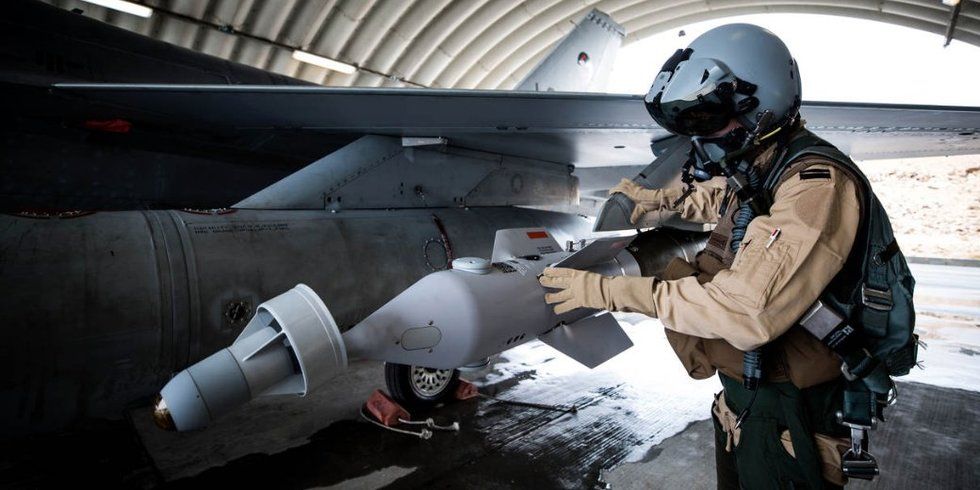 A Dutch F-16 pilot checks his aircraft prior to a flight over Iraq. (Royal Netherlands Air Force)

The pilot admitted civilian casualties were always a possibility in the fog of war, and that it was "frustrating" to find that delicate balance between decisive action and accounting for non-combatants in combat.

ISIS took control Mosul, one of the largest cities in Iraq, in 2014. For three years, roughly 600,000 civilians who resided in the city were forced to abide by ISIS's crude laws until being liberated by a joint Iraqi, Kurdish, and US military campaign.

"We really didn't want Baghdad to fall," he added, referring to Iraq's capital. "More people would have died — civilians included. Doing nothing is even worse. War is a game that we play because all else has failed."

Stefan, who has since left the Royal Netherlands Air Force, said he considered reaching out to Razzo and his remaining family. But he says that he faces bureaucratic challenges.

"The Ministry of Defence doesn't want to link a pilot to the deployment. It's not allowed," he reportedly said, adding that he "sometimes [wants] to write a letter."

"Maybe they think I'm some kind of blunderer because I killed half a family," Stefan said. "Maybe it would help if they knew I'm really upset about it too."

In an interview with Business Insider, journalist Schoonhoven said Stefan's candid account has sparked a rift in the Dutch military. Despite possible reprisals from the military, Schoonhoven said the pilot was "quite open" about detailing his experience.

"For him, it's excruciating," Schoonhoven said. "He has to live with having killed the family members."

'This was a war situation' 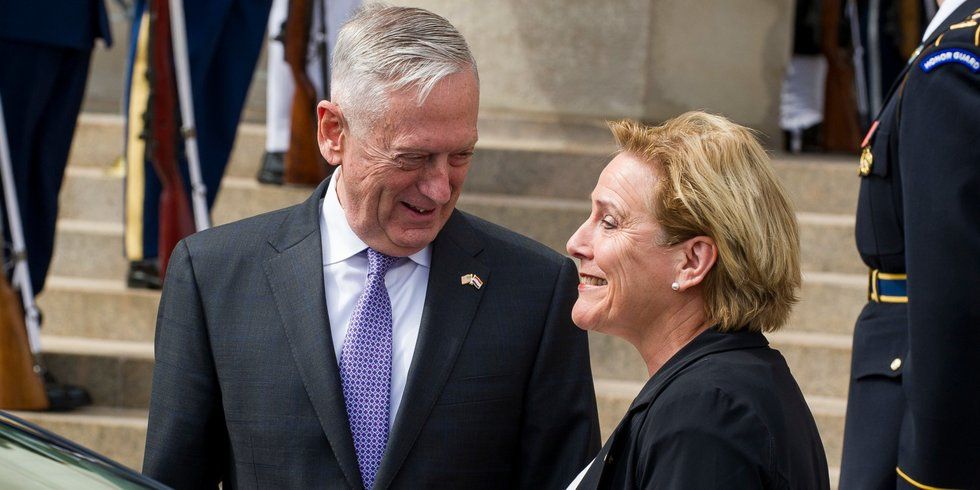 Schoonhoven said he and his colleague discovered Stefan's account while researching for their upcoming book, "Missie F-16," about the Dutch F-16's role during the various conflicts in Bosnia, Afghanistan, and Iraq. The aircraft is scheduled to be retired and replaced with the U.S.-designed F-35 aircraft.

"We wanted to write a journalistic book, not a book about heroic stories," Schoonhoven told Business Insider. "We wanted to present the dark side of flying war planes and dropping bombs."

The Dutch have been heavily active in countering ISIS. Unlike some hesitation in joining the U.S. coalition in Afghanistan, nearly all parliamentary parties voted to participate in the campaign against ISIS. The country deployed military advisers, special forces teams, and F-16s that flew "almost daily" in Iraq and eastern Syria for the anti-ISIS campaign, according to the Ministry of Defence.

Schoonhoven and Van Joolen's research indicated that the F-16s flew over 3,000 sorties and dropped over 2,000 bombs.

Dutch Defense Minister Ank Bijleveld admitted on Tuesday that the military was responsible for the deaths of roughly 70 civilians in two bombing runs in the region, according to local media reports. Bijleveld, who claimed she was not informed of the civilian deaths by her predecessor, Jeanine Hennis, passed a no-confidence vote and offered her "sincere apologies."

"As Minister, I am responsible, also for the actions of my predecessor," she said, according to Netherlands-based NL Times.

"Our actions were aimed at preventing as much collateral damage as possible, and especially civilian casualties," she reportedly said in a letter to parliament. "However, this was a war situation where these risks can never be completely excluded."

Iraq to the future: How Trump's Syria reversal reflects the unlearned lessons of America's forever wars