Sweeping Changes Are Coming To The Air Force Academy 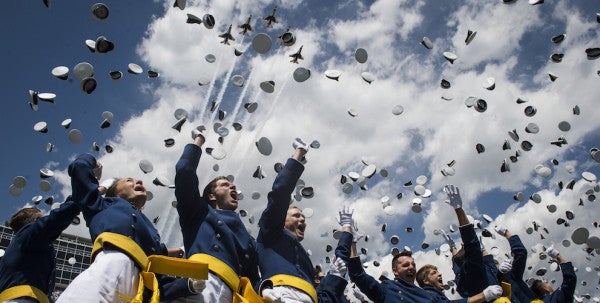 The Air Force Academy is changing amid a new Pentagon strategy that will put more cadets in cockpits and fewer in office jobs.

Finishing his first year at the academy, Superintendent Lt. Gen. Jay Silveria says the school will graduate more prospective pilots in 2019 than any time in the past 30 years. It’s a job the former F-15 pilot takes seriously, coming to work in his flight suit last week to talk to cadets about their future in the air.

“They asked questions for an hour,” Silveria said.

For Silveria, a 1986 academy graduate, the Pentagon’s focus on competition with Russia and China is reminiscent of the Cold War. After 15 years of counterterrorism and battles with insurgents in Iraq and Afghanistan, the military is looking at a future with Cold War-style battles.

“For me and my peers, it’s comforting in an odd way,” Silveria said during a break in his office.

But the new world is different from the set piece battles Silveria trained for before the Berlin Wall fell.

“The difference is in the complexity of it,” he said, noting that battles in orbit and cyberspace now accompany fights on the ground and in the air. “I see these cadets, and they are made for that complexity.”

From the outside, it seems like things have calmed down for Silveria a year into his job.

The general’s first weeks at the academy saw Silveria deliver a speech on racism that became an internet sensation and also included one of the academy’s weirdest incidents when a Friday night Nerf-gun battle was reported as a mass shooting.

But the apparent calm that followed those incidents masks massive changes behind the scenes at the academy that range from how the school responds to sexual assault and how it recruits and retains professors to a new focus on teaching cadets how to lead as the academy prepares more of them for battlefield jobs.

The changes will be coming faster this year, as the general moves from learning his job to reinventing the academy for conflicts.

Some of the changes come from the top — during a visit to the Air Force Academy for graduation in May, Defense Secretary James Mattis left Silveria with a to-do list that included expanding science and technology training at the school.

Other shifts come from Silveria’s year of walking the 18,500-acre campus and talking to everyone from cadets and professors to cooks and cops.

“I really got an opportunity to settle in and look for opportunities,” he said.

The academy is loaded with high-tech laboratories and wind tunnels, and is preparing to launch a pair of satellites this year to join one in orbit.

“There are countries without three satellites,” Silveria said.

But in terms of internet technology, the academy has remained in the Stone Age, with 1990s vintage wiring and aging software that has kept professors in the age of blackboards as bandwidth-hungry cadets struggle with low speeds.

That’s changing in the next year as the academy rolls out a state-of-the-art network.

The academy will increase its internet capacity 10-fold and bring on software that will make its classrooms interactive and give cadets new tools to handle their notoriously tight schedules.

The push to new technology comes as the academy works on the goals laid down by Mattis. Part of that charge is addressing the pilot shortage the Air Force has struggled with in recent years as flyers have departed for high-paying jobs amid a massive expansion in the airline industry.

Silveria wants another pilot boost in 2019 but also wants to grow the number of drone pilots graduating from the school along with space and cyber experts. That means cutting down on the number of cadets heading to desk jobs after graduation.

Jobs from public affairs to purchasing billets have taken about a quarter of every academy class.

Those career field choices will be narrowed for the class of 2019 to put more cadets into what Silveria calls “warfighter” jobs.

Graduating more cadets who are ready for combat roles will require changes in how the school recruits and trains.

That starts with adding sergeants.

The academy cut more than 40 sergeants in 2013 as the Pentagon budget dropped from wartime highs to $600 billion. Now, with the Trump administration expanding defense spending to $716 billion, Silveria is getting those sergeants back, with an extra sergeant in each of the school’s 40 cadet squadrons to help cadets with military training.

The gift of time

Silveria is also working to give his academy professors more time to spend with cadets. Another budget cut casualty at the academy were administrative assistants who helped academy faculty with paperwork.

Now, the academy is hiring 34 administrative assistants to give professors more time with cadets and in the classroom.

The academy is also working more closely with the Air Force to identify its future professors. Academy leaders will have more input in Air Force programs that send officers to school for advanced degrees and that program is growing in scope.

“That’s the seed corn for the institution for years,” Silveria said.

The school is seeing an unprecedented amount of turnover this year in its most senior teaching staff, with the academy filling five of its 26 permanent professor posts after a wave of summer retirements.