An Army Vet’s Take On Trigger Warnings In The Classroom

Editor’s Note: This post has been modified from its original version on Don Gomez’ blog, Carrying the Gun. There’s been … Continued 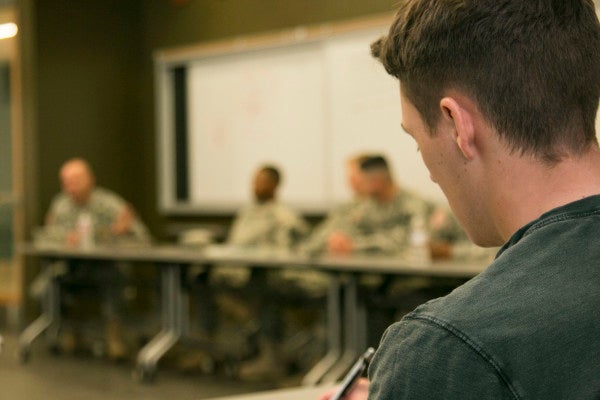 Editor’s Note: This post has been modified from its original version on Don Gomez’ blog, Carrying the Gun.

There’s been a lot of slinging going on about trigger warnings and microaggressions lately. For the uninitiated, trigger warnings are a kind of “spoiler alert” for those who might be affected by being exposed to something traumatic. For instance, this article on video game “Life Is Strange” makes the argument that the game might have done a better service to its players if it gave them a trigger warning because of the traumatic nature of the content. Others argue that by doing that, it robs the game of some of the suspense and surprise.

Microaggression is a term that I’m not sure really has a rock solid definition yet, but is pretty much a form of discrimination or passive aggressive hate.

For example: “Oh you were in the military, huh? You weren’t able to get into college?”

There’s this back and forth going on about these things, with some people arguing that we need to be more sensitive to everyone else’s potential feelings. There’s nothing wrong with that. Marching toward a better world is a good thing, in my view.

But a lot of these conversations are very focused on students, especially those who may have faced some kind of hardship in the past. Post-traumatic stress comes up a lot, and so naturally, it gets me thinking about student veterans.

I attended college between 2006–2011. The Iraq War was at its height both in terms of unpopularity and casualties. I was taking a lot of courses on the Middle East and international relations, and the Iraq War came up a lot. Professors spoke about the war as a self-evident failure. It was a joke and an embarrassment. Students nodded along and scribbled notes.

Not once did any of my professors ever ask, “Are there any veterans in the class?” It wasn’t even considered a possibility. Those who served were someone else, somewhere else.

For anyone who served overseas, especially in Iraq, it is likely that the experience was formative. It was for me. I was young and the work was extreme. My entire being is tied up with the name and the place, for good or for ill. And to have it spoken about so casually by college professors and students as a failure or a joke was painful as a new student, trying to make my way on campus, unsure of how I was supposed to behave.

Early in my college career, I’d challenge. I’d raise my hand and offer my perspective. I’d counter a student who stated categorically that American soldiers habitually raped Iraqi women. I’d correct misconceptions about the nature of military service and the rules of engagement. My jaw dropped when one student answered, “About 30 or something” when asked how many soldiers had died in the Iraq War — the answer, at the time was more than 4,000. I felt like as one of the few student veterans on campus, I had a duty and responsibility to say something.

But it was exhausting.

I learned quickly that once you “out” yourself as a student veteran, that’s it. When people see you, you’re now the “Army guy.” It doesn’t go away, and whenever a topic that has anything to do with “the war” or the military comes up in class, all eyes fall on you.

Later, when I went to graduate school, I kept it a secret. I didn’t tell other students or my professors. I didn’t want them to see me as a military man. I wanted them to judge me fairly. When students or professors said off the wall shit, I kept my thoughts inside.

In fairness, it is an odd world where a war happens, soldiers fight it, and then come home and go to college while the same war rages on.

And in super fairness, I went to the City College of New York and the School of Oriental and African Studies in London — neither of them exactly right wing war bastions of death.

But, if we’re going to move towards a world that is more considerate of people’s past experiences, then that should include student veterans. Whether they are suffering from PTSD or not, if they fought overseas — or even if they didn’t, their minds and emotions are likely intertwined with that discussion. Veterans certainly don’t need a trigger warning; the idea of being warned before they’re offended is comical. But what they do deserve is a fair chance at being heard.

And an understanding that they exist.