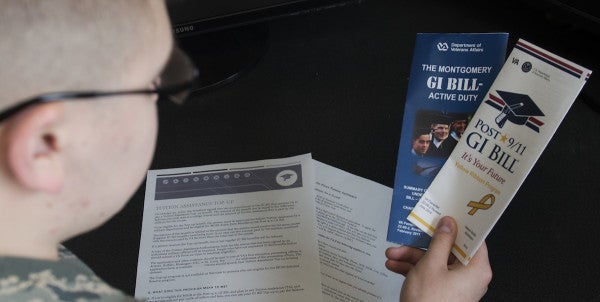 The issue lies with the Pentagon’s use of Title 10, Section 12304b, a specific deployment authorization used by the Defense Department to increase operational use of reservists and cut the cost of their benefits. Any reservist who deploys under the authorization is restricted in the ability to accrue GI Bill benefits, pre- and post-deployment health care and other resources during that duty.

Other deployment orders, such as those used for combat tours, allow part-time troops to rack up some benefits at the same rate as active-duty troops. VA pays out higher percentages of tuition and housing costs under the GI Bill the longer someone serves on active duty.

“The politicians don’t look at reservists the same way as active duty,” Sgt. Ross Dewberry, a Marine reservist said May 1 from Myrtle Creek, Ore. After a seven-month deployment last year to Honduras as a water support technician, he said he was told his active-duty time would not count toward accumulating GI Bill benefits, a reversal of previous guidance.

“When we do the time, we should be treated the same way,” he said.

There have been unsuccessful stand-alone proposals to match education benefits for reservists under 12304b orders to those of active-duty troops.

A solution to 12304b issues was included in a pre-bill draft set for discussion before a subcommittee of the House Committee on Veterans’ Affairs at the end of April. But it was postponed after public disagreements by veterans groups over a proposal to require new recruits to pay $100 into the Post-9/11 GI Bill every month for two years to help fund 18 new components.

The Reserve Officers Association “would have liked to have a public discussion. Now we don’t have a venue to discuss the bills at all. We lost the opportunity,” said Susan Lukas, director of legislative and military policy at ROA, a leading advocate group taking on efforts to change 12304b.

About 4,700 reservists and guardsmen have deployed under the use of authority 12304b across all service branches since 2015, when it was first used. Lukas has said the authorization was created on the request of Congress for the Pentagon to increase operational readiness but reduce costs. The Army National Guard was the most frequent contributor, with 2,925 mobilizations, according to data from the National Guard Bureau.

There are about 800,000 troops in the reserve and guard components compared to 1.3 million active-duty servicemembers, including the Coast Guard, according to service data.

At least one service chief is following the issue. Air Force Gen. Joseph Lengyel, commander of the National Guard Bureau who oversees the Army and Air National Guard, told lawmakers April 26 that he supported parity of benefits within the command, specifically addressing 12304b.

Resolving the issue would be “huge for retention, morale and for maintaining the operational force we’re going to have,” Lengyel told the Senate.

The promise of education after service is a top reason why troops choose to enlist, including for the guard and reserve, Hubbard said, which is attractive for people who want to balance service, education and civilian careers.

“Ultimately seeing this issue fixed would be a clear signal about our commitment to the guard and reserve,” Hubbard said. “And it’s a national security issue if doesn’t follow through on our promises.”

A spokeswoman for the National Guard Bureau pointed to Lengyel’s testimony when asked to elaborate on his position on the use and effect of 12304b.

“Previously, you could say most people didn’t know about this,” Hubbard said of the media focus that ignited awareness and frustration among fellow reservists.

“But the fact it hasn’t been fixed is more disappointing. Now we’re in a state where we know this is a problem and it’s still not fixed.”

Lukas said it would cost about $80 million over 10 years to bring 12304b and other, less often used mobilization authorities up to par with active-duty entitlements.

Congress is considering where that money will come from, Lukas said. One of the avenues is the buy-in, which would generate about $3 billion over 10 years, Student Veterans of America has said.

Without funding through a buy-in, advocates are back to square one to assess how the changes can be funded, Hubbard said.

Lukas said it appears lawmakers are using historical precedent to iron out how education benefits are enacted and funded. Congress created the GI Bill in 1944 as a wartime program fully funded by taxpayers, and later the Montgomery GI Bill, a peacetime benefit with a similar buy-in of $1,200, Lukas said.

Now that combat deployments have mostly subsided since their high point five to six years ago, Congress is saying that buy-ins would help stabilize the benefit long-term, but their lack of clarity has led to confusion, she said.

Hubbard, a reservist Marine sergeant, deployed to Honduras for a seven-month humanitarian and security mission that ended in November.

Hubbard, Dewberry and other Marines, about 300 in all, said they were told by their leadership that they would receive GI Bill credit for the deployment, which led some Marines to make plans to use boosted benefits to help pay college tuition and some living expenses, he said.

Those Marines are frustrated and confused by not accruing benefits and have scrambled to revise their life plans, Hubbard said.

Dewberry had no previous active-duty time, so he was counting on using GI Bill earnings to finish his undergraduate degree in physics at Portland State University or another college, he said.

Seven months of active-duty service would normally earn a servicemember 50 percent of tuition at any public state university, along with $924 for housing per month, with $500 for books and supplies during the academic year at Portland State, according to VA’s GI Bill online comparison tool. If the current law holds, he would receive none of that.

Dewberry turned away academic scholarships and awards totaling about $15,000 to go on the deployment, because he thought he would receive comparable benefits through the GI Bill, with plans to continue school later this fall.

Now the more realistic option for Dewberry is to start next fall, taking out thousands of dollars of loans to pay for housing expenses. Until then, the Marine studying physics plans to find some factory work while continuing his reserve obligation, he said.

Every day that there is no fix to 12304b, planning becomes a more elusive target for troops as application and standardized test deadlines come and go. If a solution comes within weeks or months, reservists starting a four-year degree could receive their diploma as early as 2022, Hubbard said.

Many have likely missed last fall’s application deadline due to the delay, he said.

“This is now a multi-year problem. And it demonstrates how out of touch Congress is,” Hubbard said. “There doesn’t appear to be a deep understanding of what the student veteran experience is like.”