The Emotional Challenges Of Student Veterans On Campus

This article originally appeared on The Conversation. This Veterans Day, Americans will honor the heroism and sacrifice of the nearly … Continued 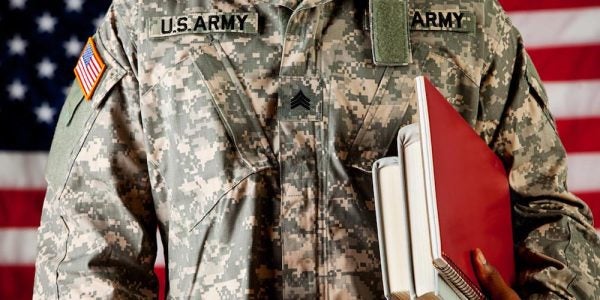 This article originally appeared on The Conversation.

This Veterans Day, Americans will honor the heroism and sacrifice of the nearly 22 million men and women who have served in the U.S. military. Among them will be student veterans. Since 2009, nearly one million veterans have benefited from the Post-9/11 GI Bill, which has allowed them to pay for educational expenses such as tuition, textbooks, and housing.

There is no doubt this federal policy does exactly what it was designed to do – facilitate access to higher education and provide training benefits. This bill offers substantial financial assistance, but as my research shows, an important benefit is missing: What the Post-9/11 GI Bill does not prepare veterans for is the emotional and psychological stress linked to transitioning from military to student life.

The challenges of a new role

When servicemen and servicewomen leave the military and enter higher education, they exit one institution, with its set of values, norms and expectations – “the military” – and enter into a new one – “the university.” Social scientists refer to this as “role exit.”

Related: How To Manage Your Finances As A Student Veteran »

These servicemen and women replace their physical training uniforms with jeans and sweatshirts boasting the university’s logo. They replace their rank – as corporal, for instance – with their year in college, such as freshman. In other words, they say goodbye to the world they know, including their comrades, and step foot on their college or university campus alone. In this transition, their identity shifts from warrior to student.

Through my work on projects funded by the Department of Defense and VA Office of Rural Health, I have closely examined this transition. And I can tell you it is anything but easy.

In my conversations with student veterans, I found them struggling with their new identity. Many realize they are no longer a service member, but they do not, at the same time, feel like a student. As one student veteran told me, he had a “disjointed” identity. He was trying to figure out who he was in his new identity.

In the military, service members felt a sense of brotherhood, became leaders and found a life of meaning and purpose. In higher education, however, many student veterans experience isolation rather than belonging. Even when they find success, it is individual rather than team-based. Some find little to no life meaning. As one veteran said: “You go from being somewhat important in the military to having a purpose every day, to go home and, ‘Well there goes the wife to work.‘ I should be going to work too but I’m gonna sit here and do school work.”

Related: 4 Facts About Student Veterans That Might Surprise You (But Shouldn’t) »

As they struggle to balance the demands of marriage, parenthood, and school, many live from paycheck to paycheck. Some feel, as one veteran so clearly articulated to me, “just a drain on society.”

Add to this the fact that many returning student veterans have witnessed, been subjected to and experienced combat violence. Students told me how their experience of violence follows them, shadowlike, on campus and in classrooms. Sounds that might be familiar or normal to other students can evoke vivid memories of combat for student veterans.

One veteran, for example, shared with me that the sound of flip-flops in a corridor triggered memories of firefights in Iraq. Another student said classroom discussion brought up combat memories. Instead of focusing on the class material, he found himself “zoned off in deep thought” about flashbacks from the past.

Afraid of reaching out

The campus community can do much to support student veterans. Indeed, there are tools to minimize these adverse campus and classroom experiences and help veterans achieve academic success.

The VA Campus Toolkit, for example, offers tips on how an administration can address invisible wounds like depression, anxiety and PTSD. Faculty can alert students to unsettling images, text or discussions. As my research found, veteran-led services such as Peer Advisors for Veterans connect

veterans to needed resources and offer veterans a sense of community. Such programs have great potential to increase retention rates and academic success.

But the issue is that some veterans may be afraid to disclose their veteran identity to professors or classmates because they fear the stigma they may experience as a result of being a former member of the military. There is a popular perception that veterans returning from the wars in Iraq and Afghanistan pose a security risk to others. My colleagues and I have found student veterans perceive public stigma as a significant barrier to accessing mental health care services.

How can they find support?

Faculty, staff and students might want to remember that there is a very strong likelihood that one of the students in their classes is a veteran. And as Americans come together to honor veterans’ military service and their valor in defending our nation, let us also acknowledge the commitment of these men and women to higher education.

Ann Cheney is an assistant professor at the Center for Healthy Communities at University of California, Riverside. This article was originally published on The Conversation. Read the original article.