As a student at San Diego State University, it would be easy to come here, go through the motions for... 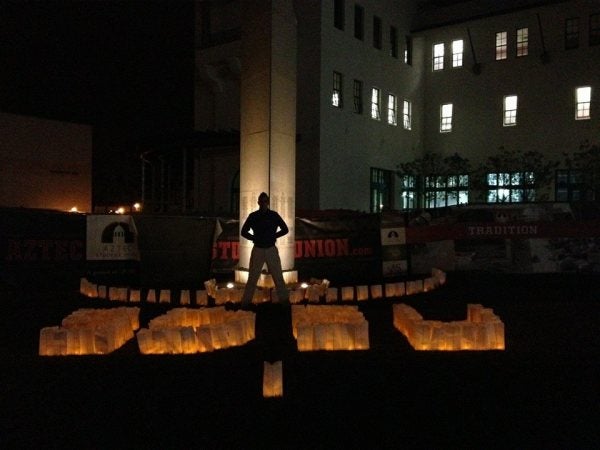 As a student at San Diego State University, it would be easy to come here, go through the motions for four years, get your degree, and move on. However, if you are a veteran — and this is a great school for veterans — you would be wasting a great opportunity to get involved with the student veterans organization, which represents the almost 1,000 veterans who comprise the total student body.

San Diego State University’s student veteran organization is a big presence on campus; it even has its own house on fraternity row. Several students live at the house and it is open to all veterans on campus as a place to socialize, study, and meet up for events.

“The SVO offers its members services for personal and professional development while pursuing their academic goals,” says senior biology major and Navy veteran Erika Armenta, the organization’s president. “These include peer-to-peer tutoring, tools-to-success seminars, and best of all, camaraderie with like-minded individuals.”

The group occasionally even has speakers come to its house. Its latest speaker, Erica Eddings, came from the nonprofit organization City Year and gave a presentation on networking, being aware of how you are perceived online in social media, and searching for jobs.

Journalism major Anna Conkey is in her first semester after transferring to the university from a community college. Conkey served as a mass communications specialist in the Navy from 2007 to 2012, and served aboard the USS Constitution and the USS Boxer. Before joining the Navy, she lived in Japan since her father was also a sailor. Conkey first found out about the student veteran organization from a peer; she went to a meeting and liked what she found.

“It’s a way to get to know people who have had the same experiences as you,” Conkey says. “Being with peers who are in my age group is nice and it’s a good networking opportunity.”

Conkey, who recently had her first child with her husband who is still in the Navy, also appreciates the family-friendly atmosphere at the veterans house. “It’s a nice place to hang out and it’s family friendly, so I can bring my daughter here,” she says.

Organization member Andy Greenwood, originally from North Carolina, is somewhat unique from the typical student veteran. Greenwood, a pilot in the Coast Guard, is attending San Diego State University to get his master’s degree in learning, design and technology. Through the performance technology master’s degree program, Greenwood is able to leave the active duty for one year while he is in school. After graduating, Greenwood will go back to the Coast Guard to help improve its training manuals and teaching techniques.

He may be a graduate student, but he appreciates having the student veteran organization just as much as the undergraduates. “It’s the people I’ve met that make it great for me,” says Greenwood. “I’ve found everything I know about the campus and the school by just being here at the house. The people in the house make it their business to help you out in anyway they can.”

Greenwood says when he isn’t in class, he is at the veterans house, which is located just across the street from campus. Greenwood uses the house as a place to not only study on his own, but to study with others as well. He tries to not take his school work home with him in the evenings so he can spend time with his wife and three kids.

“The SVO has made my transition to being a full-time student very easy,” Greenwood explains. “From the on-campus house, getting help to fill out the myriad of forms for the school and the VA, they’ve been a big help. That stuff is daunting.”

Some San Diego students are attracted to the organization for other reasons, such as its partnership with the San Diego library, which offers adult literacy programs. McShall Wong, a freshman and combat-injured Marine, is particularity interested in this. Wong, whose family from moved from China to Oakland when he was six, didn’t speak the best English when he was in school as a young boy. “I don’t want kids to think they are stupid like I thought I was when I was in school because I couldn’t speak very good English,” says Wong. “If I can help someone out, I’d like to be part of that.”

Professors and other students can sometimes pick student veterans out on campus or in class, even when they are in shorts and flip-flops like all the other students. A clear giveaway may be that they’re a little older, but also the way they carry themselves and their maturity in class.

Dr. Valerie Barker has been at the university for 13 years, and is a professor in the school of journalism and media studies. She can occasionally pick out a student veteran in her class before his or her status is made apparent. “They are usually very confident and well put together,” says Barker. “Their work ethic tends to be very good. Even when they get out of the military, they still retain that discipline.”

Student veterans themselves notice differences from when they were in school before the military and after.

“I’m able to see how to get things done, and not get overwhelmed,” says Greenwood. “I’m able to compartmentalize and prioritize due to my time in the Coast Guard.”

Conkey attended school for a year and a half before she joined the Navy and can see differences in herself from when she was a student before the Navy and now. “I’m a much better student now,” she says. “The Navy helped me to learn to prioritize better, and be more organized and more disciplined.”

A lot of veterans get out and don’t miss the military, but they do miss the friends they made while in. Student veteran organizations, such as the one at San Diego State University, give veterans the opportunity to be with like-minded people and can ease the transition out of the military.

If you are a student veteran, find out when your local veterans organization’s next meeting is. You might find it’s what you’ve been looking for in your college experience.