How To Transfer Your GI Bill To Your Spouse Or Kids

Roughly 928,000 spouses and dependents have used the Post-9/11 G.I. Bill funding to attend schools in the first five years... 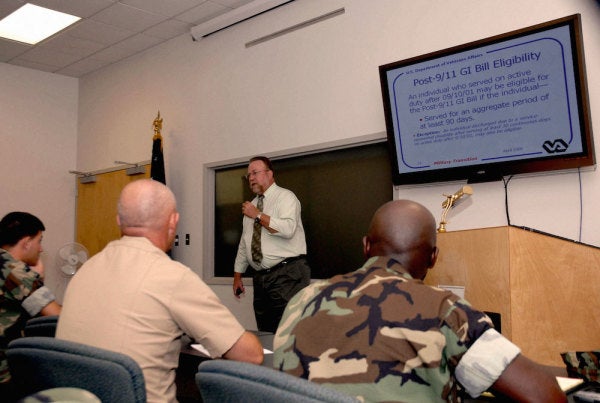 Roughly 928,000 spouses and dependents have used the Post-9/11 G.I. Bill funding to attend schools in the first five years the benefit was offered, according to the Department of Veterans Affairs. Though some lawmakers suggest that regulations be tightened to lower the number of transfers, benefits remain transferrable at the time of this writing.

The original bill proposed by then-Democratic Sen. Jim Webb, of Virginia, didn’t contain the transfer provision. The clause was added to prevent Defense Department concerns that veterans would opt out of the military when faced with deployment in Iraq and Afghanistan. The current transferability policy uses the transfer option as a way to retain service members.

Though there are a number of stipulations and qualifying factors for both service members and their dependents, this addendum has been largely regarded as a boon to the program by veterans and their families — many of whom are hoping to allow dependents the chance to graduate from college debt free.

“Who wouldn't fight to get access to 36 months of tax-free education benefits for their children?” said retired Army Col. Randall Mackey to Military Times in 2011.

According to Matt Ross, an education case consultant at Iraq and Afghanistan Veterans of America, it is important to know several things before granting benefits to a dependent.

When choosing to give benefits to a dependent, a service member will be subjected to serve additional time in the military when transferring those benefits. If a veteran is at a point where he or she is no longer able to extend service, then the dependents will be ineligible for transfer. On average, veterans are required to commit to an additional four years of service.

“The service member should be careful about retirement dates when considering this process,” Ross added.

The G.I. Bill benefits serve family members differently. For a spouse, it is possible to use the funds immediately — even if the service member hasn’t yet completed 10 years of service. Children, however, must wait until their parent has fulfilled their 10-year obligation. The bill is also unique in that it offers full transferability to these dependents, which can be used by either a sole beneficiary or split up among multiple family members.

For spouses, as with service members, a time limit on benefits is applied. Fifteen years to the date after a veteran’s retirement, the Post-9/11 G.I. Bill expires. In the case of a child dependent, regardless of retirement date, the benefits must be applied before the age of 26.

The process to switch over benefits is done through a Transfer of Education Benefits site. In order to begin that process, every family member intended to receive benefits must be enrolled in the Defense Enrollment Eligibility Reporting System. Upon approval for transfer, family members may apply to use transferred benefits with VA by printing, completing, and mailing the VA Form 22-1990e.

One major benefit for both dependents who use this bill is that in-state tuition rates may apply to public colleges and universities, in certain instances even if the person attending does not hold residence. This is extremely beneficial in the case that a military member and his or her family serve at a station outside their home state of residency.

Additionally, some schools may participate in the Yellow Ribbon program — where colleges offer additional funding at no additional charge to G.I. Bill entitlement, often to alleviate the cost of private institutions or out-of-state tuition. However, only children and spouses of service members who are entitled to the 100% of the benefit rate as determined by service requirements are eligible to receive this funding add-on.

Although the process to transfer benefits was complicated when the program was first instituted, it is “easier than ever” for dependents to gain Post-9/11 G.I. Bill eligibility, Ross said.