How A Liberal Arts Degree Made Me A Better Officer

“A liberal education … frees a man from the prison-house of his class, race, time, place, background, family, and even … Continued 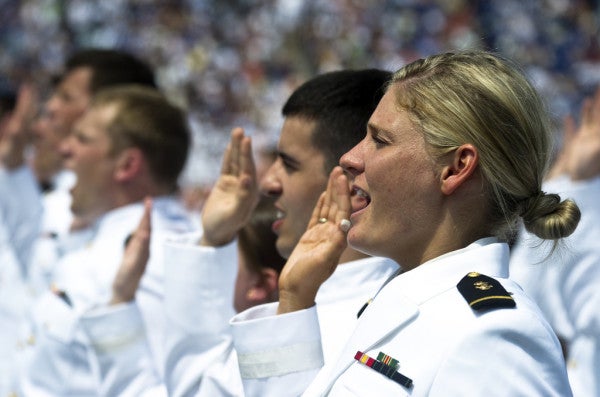 “A liberal education … frees a man from the prison-house of his class, race, time, place, background, family, and even his nation.” —Robert Maynard Hutchins, The Political Animal

I have even been asked this question in the wardroom (naval officers’ mess) while sipping a cup of coffee with my name, rank, and warfare pin emblazoned on the mug. Clearly, I became neither a lawyer nor a teacher.

The question is based on the opinion that a degree should showcase useful professional skills — for example, pre-law or pre-med rather than political science or biology. Yet this point of view fails to consider that the interdisciplinary nature of a liberal arts degree is practical in itself.

A liberal arts education teaches critical thinking and written expression: a student of the liberal arts never learns what to think, but how to think. As a military officer frequently faced with chaos and questions that may have two wrong answers, my liberal education taught me how to make sense of paradox, to strive to understand the way the other side thinks in an operational environment, in my personal life, and even well before my military service.

At 15, I was a mediocre Classics student, doodling in the pages of my textbook without focus, sitting in the back of my ninth-grade Latin class. My classmates and I were trying to comprehend that the United States had been attacked, and we were now a nation at war. On a day when sirens persistently blared outside our classroom’s only window racing to rubble, my Latin teacher completed the lesson and then paused. He reminded the handful of us who had not gone home to be with our families to “seek knowledge.”

With that directive, that teacher imparted the invaluable lesson that ignorance was the most potent adversary.

Related: 4 nanodegree programs that will help you land a job without going to college.

At 18, I was in my first term of college, studying Plato’s Republic with all my fellow new students. Like many students before me, the Allegory of the Cave struck me: we are all in the darkness of the cave of ignorance. It is only through asking questions that we can emerge to the light, our mission for the next four years.

When I was 22, I completed bachelor’s thesis. As it came time to pursue careers, my choice to enter the Navy perplexed some. It was not the first time I considered military service, but it was only at this time that I felt confident that I was making the right decision. My view of the world was highly influenced by Charlotte Perkins Gilman, a voice of the early feminist movement, who wrote, “To attain happiness in another world we need only to believe something, while to secure it in this world we must do something.”

My decision to take the oath was largely predicated on the realization that I have always had a call to serve, that it was finally time to take action.

I turned 27 on my third deployment, and lived in an alien culture that I am still trying to make sense of. In school, we were required to master a foreign language not only as a practical skill, but also as a means to try on and embrace a different culture. On this deployment, although I disagreed with much that happened around me, I tried to understand the rationale of those who live there: how does it make sense to them? Some completely scoffed at it and rejected the paradoxes, building a wall within themselves against it. It was not my job to judge; it was not about me. I had my own cultural and cognitive biases about them, just as the locals do about me. I decided it was best to reduce my own ignorance. Perhaps it would help reduce theirs.

As an operational planner, I have participated in countless meetings where we ordered with the cliché to “think outside the box.” Most of my colleagues have STEM degrees, and follow a scientific process to formulate their solutions; they can answer four of the “five w’s” with that process: who, what, where, when. However, the question answered by a core liberal arts education is why.

I struggled to learn how an engineering plant worked, but excelled at understanding the context and impact of our missions. As a leader, my rigorous academic training has strongly impacted my leadership style: I choose not to be a distant, calculating Machiavellian leader, but rather answer Jean-Jacques Rousseau’s question, “What wisdom can you find that is greater than kindness?” Asking “Why?” has enabled me to understand the motivations of my subordinates.

Home from deployment, I have slowly started to prepare to transition to civilian life. I will likely willingly deploy again before that time, but I am delighted at the prospect of being a full-time student again. When asked why I desired to pursue a two-year, in-residence graduate degree rather than an accelerated program, night school, or correspondence course, the answer for me was simple: I want to take the time to fully pursue ideas before applying them, as I have over the last five years, to the dynamic challenges of real-world events.

So what are you going to do with that liberal arts degree?