Colleges across America are officially back in swing. But as millions of college students, including countless student veterans, fill the... 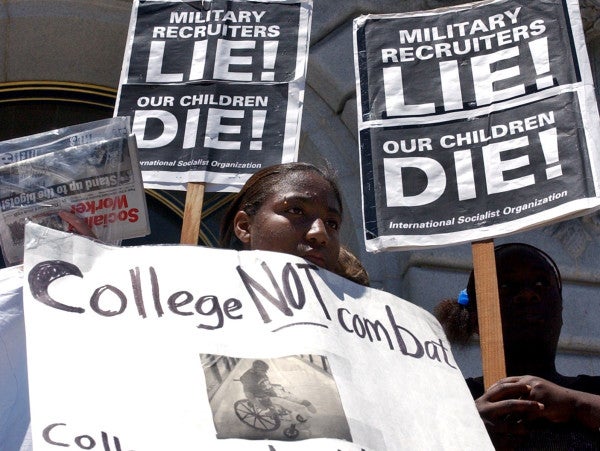 Colleges across America are officially back in swing. But as millions of college students, including countless student veterans, fill the halls and paths of America’s universities, we wanted to look at an incident that took place with a take-home examination for one public college last spring, which we originally saw on Ranger Up.

At Bronx Community College, a class called English 12 (Composition and Rhetoric II), assigned a take-home essay for students as the final exam. The prompt asked students to demonstrate what they had learned on composition and rhetoric that semester by writing a two-page letter “to someone you know or someone from your imagination who is thinking about joining the military.”

The point of the exam was to write an essay to encourage or discourage the reader from joining the military.

“If you don’t want this person to join the military,” the assessment read, “try to discourage him or her by writing about the issues you have learned from your ENG 12 course.”

“If you are in favor of this person joining the military, assume that he or she has already had a preliminary meeting with a recruiter and therefore has been told about all the benefits the military has to offer. However, you want this person to be fully informed before making a decision, so in your letter you focus on the issues you have learned from your ENG 12 course.”

In other words, if you want to disagree with the professor and encourage your imaginary friend to join the military, you’re not allowed to introduce any benefits the military has to offer; you must inform your friend of the issues this one English class taught about the military.

Here are the issues with joining the military, as told by the unidentified professor at Bronx Community College:

“1. The dishonesty of recruiters who choose to omit vital information when they are trying to persuade young people to join up.

2. The possibility of getting PTS(D). Discuss the causes, symptoms, interactions with loved ones, employment, alcohol and drug addiction, etc.

3. Read ‘Learning to be a Lean, Mean Killing Machine’ (Article H in Supplementary Readings) and discuss the process of turning a recruit into a killer.

4. Rape and sexual harassment in the military.

5. The increased possibility of committing suicide. What are some of the reasons veterans commit suicide?

6. Why killing civilians is part of modern war.

7. Recommend that the person read Thank You For Your Service and explain why he or she should read it.

We reached out to the chairperson of the English Department at Bronx Community College, Dr. Robert Beuka, who told Task & Purpose via email that the image was legitimate and depicted a test that was issued this past spring at the college.

But he said the issue was corrected immediately. There were two student veterans in the class, he said, and they reported the exam to the school’s veterans service office.

“I immediately contacted the professor of that section, pointed out what I felt to be the flaws with the assignment, and asked the professor to write a new exam,” Bueka said.

The situation was resolved to the satisfaction of the veterans service office and the student veterans of the class, according to Bueka.

“We pride ourselves at BCC at being a veteran-friendly institution,” Bueka said, “and I'm pleased that cooperation between students, faculty, and staff brought this issue to a quick resolution.”

It is encouraging that this incident did not go unchecked by department officials, but how much of this course was devoted to propagating this blatant anti-military agenda before the final exam? The test states that students should use “the issues you have learned from your ENG 12 course.” Why were so much of the course materials geared toward painting an unabashedly negative picture of the American military in the first place?

Also, what if there hadn’t been veterans in the course, what would have happened then? What if they hadn’t spoken up?

This test, which was produced by the professor, reflected a deep anti-military bias that unfortunately exists and is more common than we think, and it’s woefully uninformed.

People who join the military are not killing machines, are not tricked into doing so, and will not leave as rape victims with post-traumatic stress disorder and radiation poisoning.

I’m all about patriotic dissent, the conduct of the government in future wars and the lives of the service members of tomorrow depend on a critical, informed views of the U.S. military. I’m not even theoretically opposed to injecting current events or sociological debates into writing classes. If this professor wanted to honestly and objectively explore modern military service and engage his or her students in debate while teaching them composition and rhetoric, I think that would be a great class.

But this doesn’t meet the shallowest thresholds of doing that. This professor has no idea about the modern military, and was interested in only propagating an agenda that the military is bad, and that joining the military would be a mistake.

As a veteran, it’s difficult not to get angry about this, but we can’t meet this ignorance with anger. Modern veterans need to engage their communities with an honest portrayal of what their individual military service was like. It’s not all pretty, but it’s not unilaterally bad like this course paints it to be.