President Donald Trump signed an expansion of veterans education benefits Wednesday, boosting aid by $3 billion over the next 10 … Continued 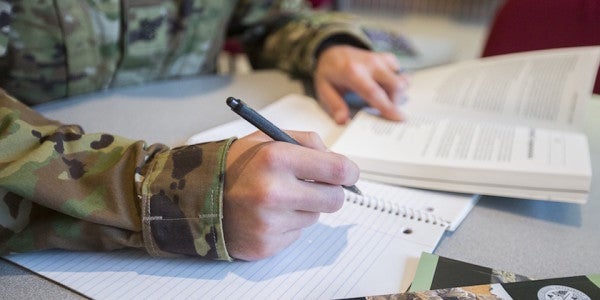 President Donald Trump signed an expansion of veterans education benefits Wednesday, boosting aid by $3 billion over the next 10 years and extending assistance to some veterans and dependents who didn’t qualify.

Trump signed the bill — dubbed the “Forever GI Bill” by its supporters – at his golf club in Bedminster, N.J., with little fanfare and no press or public remarks, and only Department of Veterans Affairs Secretary David Shulkin at his side. Shulkin took a few questions from reporters following the signing, though they focused mostly on the violence that erupted during a white nationalist rally in Charlottesville, Va., over the weekend.

Lawmakers and veterans have heralded the GI Bill expansion from its introduction less than one month ago through its passage in the House and Senate – calling it a “shining example” of bipartisanship.

“The signing… marks a new era for all who have honorably served in uniform,” American Legion National Commander Charles Schmidt said in a statement. “This lifetime benefit will allow veterans, and their families, to earn degrees and begin rewarding careers that can lead our economy. We believe that this legislation… will transform America, as the original did following World War II.”

The bill is officially titled the Harry W. Colmery Veterans Educational Assistance Act of 2017, named for the past commander of the American Legion who authored the GI Bill of Rights in 1944. It’s a combination of 18 different bills.

It immediately eliminates the 15-year limit veterans currently have to tap into their education benefits. That restriction will no longer apply to veterans discharged on or after Jan. 1, 2013, or to current and future servicemembers.

The bill also includes dozens of provisions that will go into effect in August 2018.

Members of the National Guard and Reserve mobilized under Pentagon authorization codes Title 10, Section 12304, 12304a and 12304b, were prevented from earning GI Bill credit. The bill fixes that, allowing servicemembers and veterans who deployed under those orders since June 30, 2008, to claim their benefits.

Surviving spouses and children of servicemembers killed in the line of duty will qualify for the Yellow Ribbon Program, which now allows only veterans to attend schools or enroll in programs that cost more than the GI Bill tuition cap.

The bill also provides a 10 percent boost in payments for servicemembers who spent less than one year on active duty, meaning an increase of up to $2,300 per year to some veterans.

The legislation also offers tuition reimbursement to veterans whose schools close. The measure applies to veterans affected by school closures since Jan. 1, 2015, meaning thousands of students at for-profit ITT Technical Institute and Corinthian Colleges who lost their GI Bill credit can have them restored.

Starting in August 2019, veterans using the GI Bill to pursue science, technology, engineering and mathematics degrees will be eligible for an extra nine months of benefits to complete their degrees, up to an extra $30,000.

Spending on the GI Bill over the next 10 years is expected to total more than $100 million. The $3 billion boost will be paid for by decreasing living stipend payments under the GI Bill to the level the active-duty military receives. In 2014, payments to active-duty servicemembers were reduced by 1 percent each year for five years. The reduction didn’t apply to GI Bill recipients.

The VA voiced concerns last month that it would take a reworking of the agency’s information technology for their automated system to recognizes the changes in eligibility for benefits. Under the bill, the VA will receive $30 million to get its IT ready.

Veterans organizations feuded about an initial proposal to pay for the expanded GI Bill by reducing new enlistees’ basic pay by $100 each month for 24 months. Some organizations called it a “tax on troops.” Rep. Tim Walz, D-Minn., said it was almost a “death knell” for the bill.

After the groups found consensus, the legislation was introduced July 13 and received no opposition in the House and Senate.

“To go from being dead in the water three months ago to having this on the way to the president’s desk is nothing short of remarkable,” Will Hubbard, vice president of government affairs for Student Veterans of America, said when the Senate passed the bill Aug. 2.

SVA President Jared Lyon credited Hubbard and representatives from Military Order of the Purple Heart, Got Your 6, Vietnam Veterans of America, Veterans of Foreign Wars, the American Legion and Tragedy Assistance Program for Survivors for getting the bill passed. A few dozen other veterans, military and education organizations also supported it.

“This is a moment worth celebrating with our sisters and brothers who have – and will have – worn our nation's cloth,” Lyon said in a statement. “Thanks to the herculean effort of the veteran community and allies in Congress, student veterans today and in the future will enjoy lifetime access to the GI Bill.”